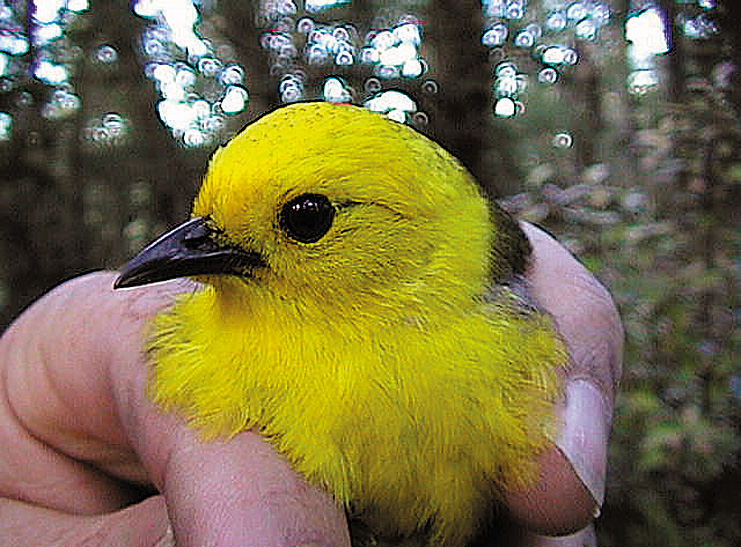 Alarm bells are ringing over the future of yet another native bird species on the mainland, following two cata­strophic seasons of predation.

In the past two years, seven of the nine largest remaining populations of the mohua, or yellowhead, in the South Island have undergone serious decline. One is now thought to be extinct.

More disturbingly, five of the population crashes have occurred in areas in which the Department of Conservation has been running preda­tor-control programmes, including one mainland island (see “Counting kaka”).

In the 25 or so other areas where mohua have been recorded recently, the birds are also thought to have suffered heavy predation. Five of these local populations may now be approaching extinction.

In the Eglinton Valley of Fiordland, DoC has been running a stoat-control programme for almost 10 years. During the 1999/2000 season, staff recorded 27 pairs of mohua in a 300 ha study area. By 2000/01, this number had declined to nine pairs and, this season, no mohua could be found.

On Mt Stokes, in the Marlborough Sounds, mohua crashed from about 90 birds in 1998/99 to local extinction by the summer of 2001, despite an inten­sive stoat-and possum-control pro­gramme (see New Zealand Geographic, Issue 50).

In the Hurunui mainland island mohua declined by about 75 per cent during the 2000/2001 season, despite an integrated pest-management programme. In the adjacent North Branch, where no pest control was undertaken, the previously healthy population was reduced to two pairs of mohua.

“It is pretty heart-rending to see these populations that we have worked with get absolutely thrashed like this,” Roberts says. “Our plan was to have these mainland populations managed so they were sustainable. Now it seems that more management input will be needed to keep them going.”

Roberts says that most of the smaller mohua populations are probably also in serious decline. Only a few populations, such as in Otago’s Blue Mountains and the West Coast’s Landsborough Valley, appear to be stable.

The recent decline has been trig­gered by the beech “masts” of 1999/2000 and 2000/2001, which led to large increases in stoat and ship rat numbers in many part of the South Island, on the back of an abundant food supply of beech seed.

Stoats had been regarded as the primary threat to mohua, and were being controlled in the DoC-managed areas. However, it seems ship rats were able to survive in high numbers through the two mild winters that followed the beech masts and developed into a second source of mohua predation, which caught DoC by surprise. Rats are now thought to be the main villain in all the areas that DoC has been running stoat-control programmes.

“We were confident that we could manage stoats, but then along came a new threat that happens maybe every 20 or 30 years, and it just bowled them,” Roberts says.

In response, DoC is diverting an extra $196,000 into managing South Island beech-forest ecosystems in the coming financial year, with mohua targeted as one of the key beneficiaries. Among other work, DoC will be scrambling to set up stoat-and rat-control programmes in the Hurunui and Hawdon Valleys of North Canterbury, where predator numbers are predicted to boom in the coming season.

DoC has also transferred mohua to three predator-free offshore islands in the past year—in the Marlborough Sounds, off Stewart Island and in Fiordland—to provide back-up populations of the species, which is thought to number several thousand in total. Further transfers are planned in coming years.

Roberts says it is a time for DoC to regroup and focus on saving the bird on the mainland. Otherwise, it is another species that will follow the familiar narrative of fragmentation and decline and, ultimately, island exile.