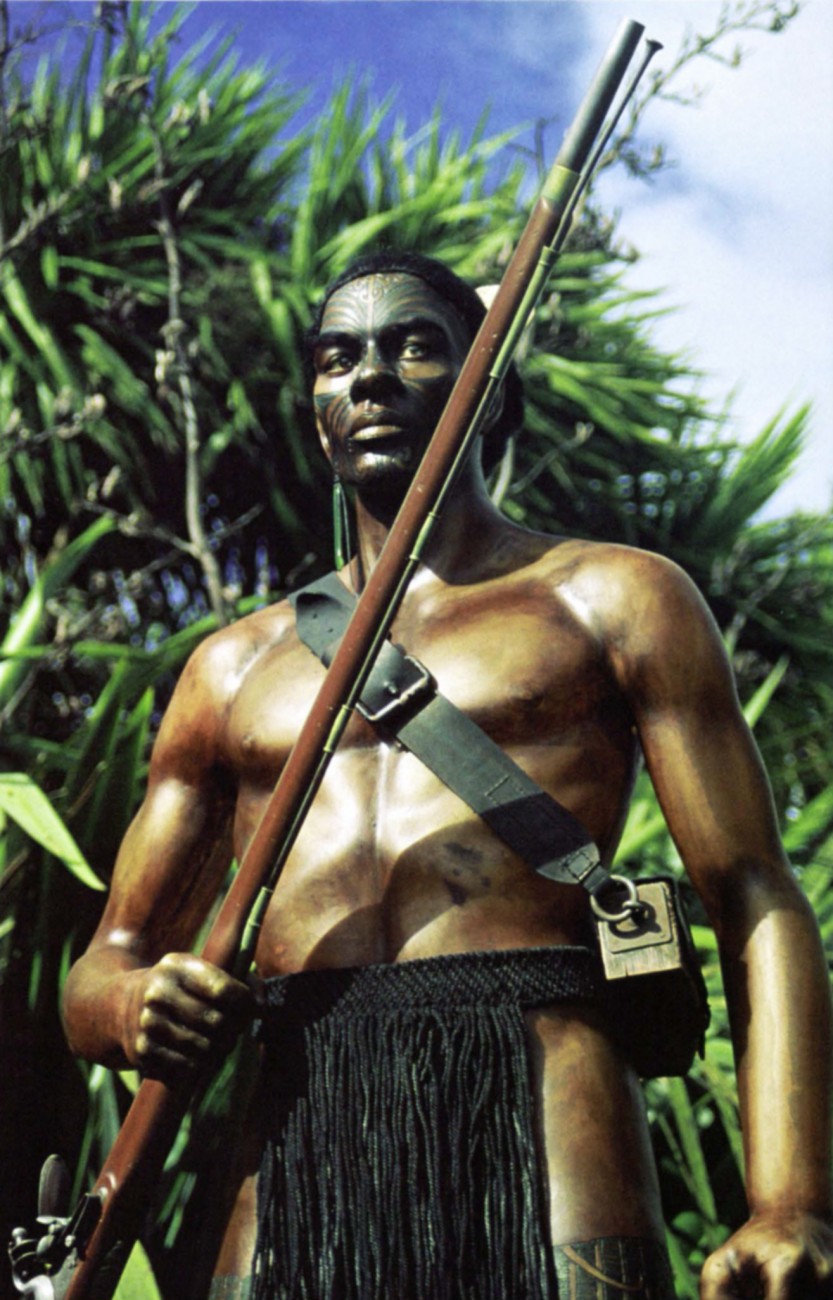 Ogle accompanied the classes into the displays covering the 1820s-60s period, and, as the other students marched off in one direction, the Maori boy walked in the other. Ogle tagged along. The boy found the diorama depicting Maori invading Taranaki during the inter-tribal wars, or musket wars, as they came to be known. It’s an epic 12-metre-long display featuring 800 miniature men, women and children carrying potatoes and muskets, herd­ing pigs, crossing rivers and negotiat­ing with hapu, against a backdrop of the north Taranaki coast.

In his forthright way, the boy asked Ogle, “Did you make all this?” “Yes.”

He walked along, mesmerised, and coming to the scene depicting a stereotypical north Taranaki river mouth, the boy declared, “I go fish­ing there with dad!”

“Yea, that’s it; Tongaporutu. We go round past that rock there and…” he described his fishing trips in some detail. Once over the initial flush of identifying the location, he drew back and took in the bigger picture. “Who are all these Maoris?” Ogle gave him the overview but was floored by the boy’s next question: “Where did they get all the guns?”

Ogle says while all the other students were ticking through their worksheets, this boy found the nub of the issue within a few minutes. “It was a real thrill for me that this kid in his own time and in his own way had got into this display. The thing is; he’ll never go fishing there again without thinking about this and he’ll be saying to his dad, I imagine, ‘Hey dad, all these Maoris came down here with guns…

“And that”, says Ogle, “is what it’s all about. We are unashamedly entertainment in some way. But it’s what you do with that entertainment that counts. You’ve got to grab kids’, and adults’, interest first. If you can’t engage them, you’ve lost them.” Many of the displays throughout the museum feature life-size models of children that immediately draw real children into the scene.

Nigel and wife Teresa bought the Tawhiti Dairy Factory, one of 115 that used to serve Taranaki’s dairy farmers, in the late 70s. He says, “Every community has its own unique stories to tell. While some of these stories may seem relevant only to that community, I believe that pro­viding they are told from a human, social perspective, then almost any age or culture will relate to them.”

Nearly 30 years later and the Tawhiti Museum itself has become a regional icon, telling local stories that, perhaps unsurprisingly, have not always been meet with unani­mous local approval. For example, the first displays of the 1860s land-wars opened in the late 1970s, met small but solid resistance.”I was told that sort of stuff should not be displayed. It’s just causing trouble. Why do you insist on talking about confiscation, and so on?” On one occasion, a group of local farmers came out and confronted Ogle. “I really got it. They really came at me.”

He had the same reaction regard­ing cannibalism. And now, in the 21st century, there is strong resist­ance about the inter-iwi wars. Ogle insists, “We’ve got to understand that we can’t forever sweep it under the carpet.” He realised the mu­seum couldn’t discuss the 1860s without talking about Taranaki’s intertribal situation in the 1830s and 40s. “We’d done the pre-European thing next door and ignored this. Everybody had.” Noting that when you own your own museum you don’t have to justify your decisions to a committee or board, he set off on an 18-month project to create the musket wars display.

Like all his displays, he re­searched by “reading and reading and reading.” Ron Crosby’s book (The Musket Wars — a History of Inter-iwi Conflict 1806-45) was published as Ogle started the project. “That cranked me up and I decided to do it bigger and better than I originally thought.” He made moulds of original 1:32-scale body parts; heads, arms, legs, etc; from wax or resin because it’s easy to carve and modify, and made the re­sultant display figures from urethane resin. These body-parts were mixed and matched to form 800 individu­als, resulting in no two figures being identical. Every figure’s clothing was sculptured from epoxy putty. There are also several life-size figures in contemporary dress.

Taranaki’s northern rugged terrain determined that all invading Maori had to enter Taranaki along the coast and it is this backdrop Ogle has recreated for the diorama. He says, “It was vital that the land­scape was obviously New Zealand. It’s not going to work if people don’t know where it’s meant to be. People have to be able to relate to it.” A lot of effort went into cast­ing and sourcing “things” to make 1:32-scale models of mamaku, toi toi, flax, and cabbage trees. Pre­served yarrow seed heads give a “mass bush look”. He photographed river mouths, especially the Tonga­porutu River, noted colouring and strata, ending up with an album of photos. He made silicon moulds from old wooden telegraph poles to replicate the strata and took moulds from Awakino rock for accurate texture. I found the whole diorama of people in landscape remarkably realistic and it made me feel like a giant transported into a real event at another time.

But the project nagged at Ogle. He says, “I got half-way through that 18 months and thought, ‘Oh, boy, I can’t justify the time this is taking.’ I started getting cold feet about the whole thing. Now, it’s quite the opposite. People enjoy it more than I ever thought. Not only was it worthwhile but it’s almost become the iconic display.”

Historian Michael King was impressed. He visited the museum shortly before his death and, after seeing this display, told Ogle, “You know, in many ways, this was the sort of display I was hoping we would see at Te Papa—and it never happened.” Ogle confides, “I took it as such a compliment. I treasure that line.”

Since then, the museum has updated its 1860s period display. This is the period when encroaching Pakeha hreatened all iwi and inter­tribal conflict significantly subsided so they could unite against the Pa­keha. South Taranaki iwi included.

Meanwhile, Kimble Bent deserted the British army in 1865 in an attempt to live with Maori. It worked, albeit precariously, and over many years he witnessed some of South Taranak i’s historic battles, met leaders, and learned much Maoritanga.His remarkab le story was published by James Cowan in 1906 as The Adventures
of Kimble Bent. The book faded over the years until, Ogle says, “I James! Belich started quoting from it, which backed up theories from other sources. People started saying the book was quite useful. Suddenly, it had a new respectability.We’ve picked up on that. This couldn’t be a more local story.”

To illustrate, Ogle turns around, arm outstretched, pointing to numerous pa and other sites from Bent’s story that surround the district. “It’s a fabulous story and it is unique. There is no other char­acter that has left us with that. And if we’re not going to tell the story, who will?

Several Kimble Bent displays depict various scenes from the book and the same attention to detail that the museum has built a reputation for is in all of them. Each display has headphones with a 30-second quote from the book. “The most common comment from people about the Kimble Bent display,” says Ogle, “is; who is he, we’ve never heard of this guy.”

While the Tawhiti Museum has various other displays of Taranaki’s past housed in 5000 m2 of building on its 1-ha site—including the dairy industry, pioneering life, purpose-built tractor shed, bush railway (on an extra 1.3 ha), and more—it is the pre-European and the meeting of Maori and Pakeha displays that particularly resonate with south Taranaki stories.

Ogle firmly believes that, “His­tory isn’t inherently boring to either kids or adults. If we can engage them, they will he interested. They will learn all the things we want them to from history.”

Just like that 10-year-old Maori boy. Ogle reckons, “Next time someone decides to bulldoze a pa at Tongaporutu, that kid will be at the forefront saying, ‘No way. That’s part of our history. We need to keep that’.”