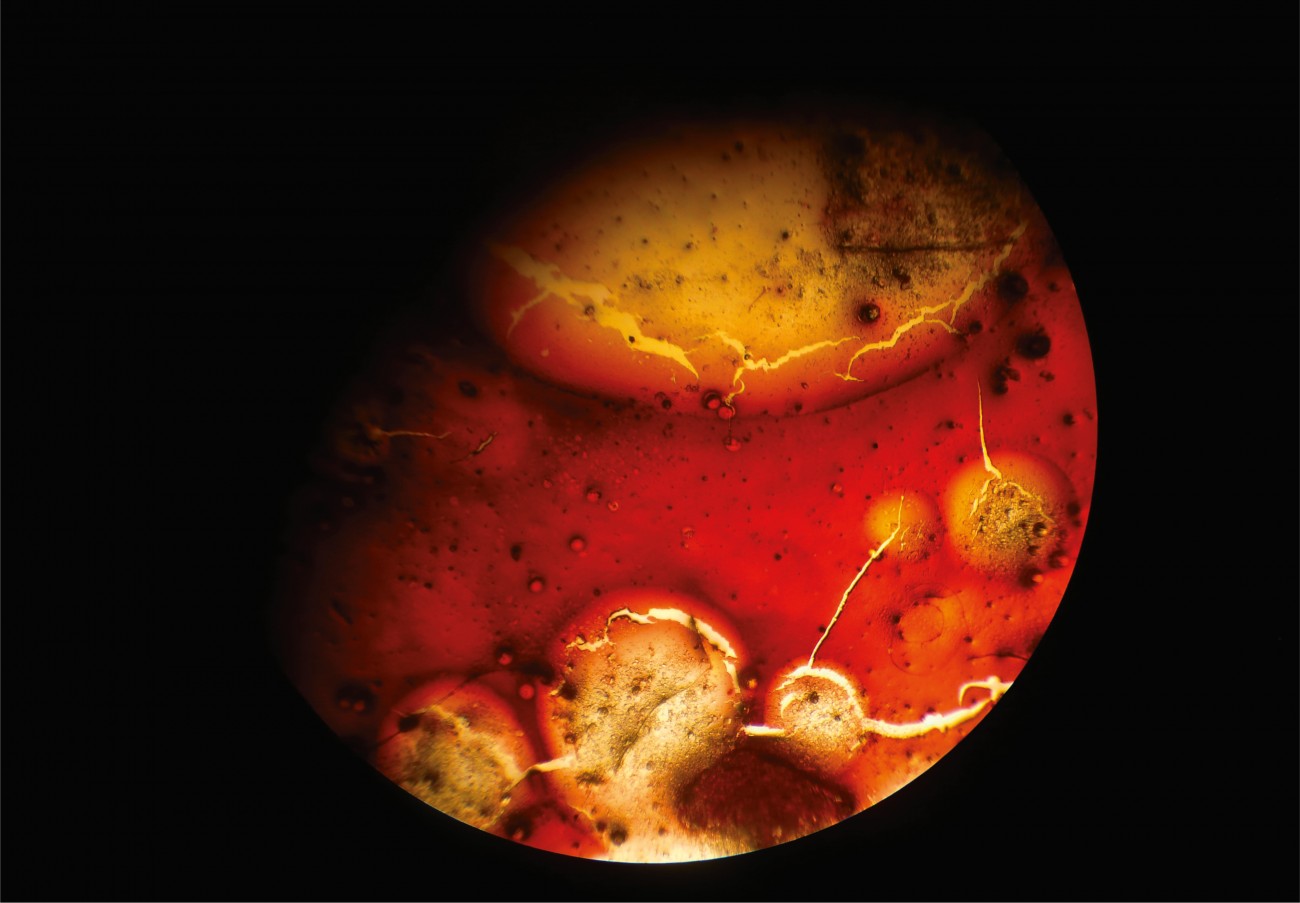 Follow her on a collecting trip to a garden or beach and you discover what puts that perpetual grin on her face; an expression as if she alone was privy to a happy secret. Here and there, she picks up a pebble, a leaf, a shaving of lichen or an insect’s wing. Else­where she pockets a broken shell, a pinch of sand, a flower petal, shards of crystal; all seemingly ordinary debris that falls into the cracks of everyday life. Return to her stu­dio and look at these oddments again, this time through one of several powerful micro­scopes. There, the secret is revealed and it makes one gape in wonder.

A seasoned armchair explorer of the un­seen, Barnett sits back and smiles. “God is in the detail,” she says, quoting the German art historian Aby Warburg. “We send probes to Mars and beyond to look at rocks there, but do we really see what, within our arm’s reach, our backyard, under our very feet?”

As Barnett points out, there is an exqui­site beauty to be found in the minutiae, in the close-ups of rust-like iron oxide stains, in the lichen forest the size of a pinhead, the delicate latticework in the mayfly’s wing, the honeycomb grid in the eye of a bee. Under 40x stereoscopic magnification, grains of ordinary beach sand are like fist-size rocks, yet each is a gem with crystalline geometries that are chiselled and sparkling
like those of a diamond.

In this world of microscapes, the most ordinary objects offer surprises. On a glass slide of the instrument, Barnett dabs a drop­let of seawater from her sea-horse aquarium, then adds a dash of black dye to enhance the contrast. Under the microscope’s beam of light the water begins to evaporate and the salt crystallises. An image appears, what looks like aerial view of city suburbs, with a regular grid of streets, mews and driveways, its pattern broken only by an occasional crystal seed, a four-pointed star, like cathe­drals of this otherworldly city.

“Nothing is ordinary,” says Barnett. “There is inherent beauty in everything, whether a blade of dry grass or the anten­nae of a manuka beetle. All we need is to stop and open our eyes to it. When we do, one thing becomes clear: there are patterns within patterns and designs that repeat themselves on many levels.” While artists and poets have long drawn inspiration from this fractal dimension, Chaos Theory sci­entists have also seen these symmetries of scale in everything from galactic spirals to weather patterns, market fluctuations and in energetic particle collisions.

Now turn the microscope back on its owner and, clicking through the increas­ing degrees of magnification, it will reveal a farmer and a mother, a successful home­grown potter, a ceramic artist, and an ex­pert in glazes. It is through the glazes that she captures and expresses what she sees in the microscopic worlds. The results are as extraordinary as the inspiration that has brought them about.

Some of her glazes have the patterns of snake skin, others of dew drops and blister­ing paint. Within them you can see deserts in drought and deserts in bloom, aerial pictures of coral reefs, and ice shelves breaking up in the inky-black of an Arctic sea. They are all incredibly tactile, inviting one to touch them, to read their Braille-like messages.

Yet perhaps the most striking examples of her glazes are those that evoke aerial im­ages, the close-up patterns of our planet seen from the air.

The similarities between the two sets of landscapes and points of view—from aircraft and through Barnett’s microscope—are un­canny. The earth from above and the earth from within mirror each other in designs and patterns, no matter what the scale and the magnification. A close-up of ochre patina on river rocks is nearly indistinguishable from an aerial view of the Persian Gulf; a detail from a piece of Taupo pumice could pass for Mt Taranaki seen from high above.

The parallels do not stop there. One of Barnett’s blistering glazes resemble an image taken at the bottom of the Mariana Trench, another mimics the surface of Jupiter’s moon Io, sent in by the Voyager probe.

Barnett clearly delights in the reactions her work and the treasures of her studio elicit in the visitors. Perhaps—since art at its best is a tool of seers—it is the satisfac­tion of sending us off to wonder about the bigger picture. The archaeobacteria and the clouds of stardust, the Mandelbrot fractals, the holographic nature of reality, and the Universe in the grain of sand.