Not long ago, I discovered a wild hop vine growing at Mahoe, just a few kilometres east of my Taumarunui home. Hops don’t flower unless they can climb up some­thing, and this plant was entwined on the stay wire of an electrical transformer pole. It was a beautiful specimen, and it took me back to childhood days in provincial Nelson—then and now the New Zealand headquarters of hops.

Originally, the labour intensive crop was grown on small holdings, like the one my parents owned. The hops were harvested by hand pickers, who earned their pocket money and enjoyed a social occasion at the same time.

As with any crop, there is work to be done in every season. In early spring, the vines are pruned back and strung. Binder twine is taken from the overhead wires, looped under a hook set among the roots of the plant and then tied again to the wire about three metres above the ground, forming a V.

As the plant shoots away, the strongest two or three vines are trained up each string. Hops grow up in a clockwise direction, the opposite way to beans. If they are trained the wrong way they will simply fall down.

The growth of the vines is amazing. Anything from a few centimetres to half a metre in one night is possible. When the vine reaches the top of the string it folds over forming a bushy head.

The flowers begin to come out in January and February. They are pale green and develop into a conical shape with overlap­ping “petals,” with a seed forming at the base of each “petal.” They grow in bunches and have a very strong perfume—unique and unforgettable.

There are male and female plants, and both are required for a good crop of hops. The male is usually a very strong, heavy-looking, darker vine placed spar­ingly throughout the garden. The female is the beautiful and useful one—the one that produces the hops.

At the end of February or beginning of March the hops are ready to pick. The weight on the wires becomes enormous, and during a heavy rain or strong wind, if a stay wire gives way the whole garden can collapse onto the ground. There ensues a frantic attempt to lift as much of the garden as possible and get as much picked before the crop is totally ruined.

In my day, pickers used to arrive by car or bus or any other means. Some just turned up to the door asking for a job. They were accommodated in baches on the farm—comfortable, but no luxuries.

Hop bins were made out of sacking, with wooden cross legs at each end like an old-fashioned baby’s basinette. The strings of hops were cut down using a long pole with a sickle-like head. They were taken to the pickers immediately, as it was easier to pick them before the plant began to wilt.

The pickers stripped off the hops into their bin with as few leaves as possible. The leaves were not wanted. Gloves were often worn, as the stems had stiff hairs on them which acted like a rasp. Hands could become very raw and sore.

Hops contain a resin which caked the pickers’ hands and clothes. The aroma became very strong as the season progressed.

At lunchtime and knock­off time the hops were measured out and the pickers paid per bushell. From the garden, the hops were taken in big sacks to the kiln where they were spread over a loft floor to dry. A fire was lit below, and a steady “dry” maintained for 12 hours.

The hops were turned at about two-hourly intervals, so it was a long night’s work. After cooling, the dried hop were baled up ready for sale, the same as wool is baled in a press.

Hop picking was a huge event in the calendar, lasting for up to a month. In the early days the schools used to close, as it was all hands on deck for the local families. The population of the small rural areas of the Moutere, Riwaka and Motueka districts increased in size from hundreds to thousands of residents for that short time.

Changing times affected the hop farmers. Pickers became harder to get, small gardens began to vanish and the big gardens became bigger. Economy and mechanisation became the name of the game.

Huge machines now replace the hand pickers. The staff numbers have been reduced to a fraction. The hype, the excitement and the drama of harvest has gone. A machine, sitting in a big shed, is fed the strings at one end and spits out the hops at the other. They are still dried as before and baled up and sent away.

There is still the same smell, but the atmosphere has gone. No longer are there pickers in the garden. No more chatter, singing, debates and high spirits. Someone always got dumped in a bin full of hops before the season was over. No more calls of “String!” echoing around the garden as more was needed by the picker. No more smokos and lunches eaten in some shady spot beside the garden.

Another piece of our history has faded into oblivion leaving only nostalgia for those who had experienced it. I have great memories of the season of the hops. I did my share of all phases of the production, and I still miss the smell and the deafening sound of the cicadas in the evening …

As I looked at the hop on the transformer wire I wondered what story it had to tell.

I assumed it was a remnant from early sawmilling days. Was it used to make yeast for bread? Or was it there for making beer? This was a dry area in those early days, so we can only imagine the possibilities.

Until recent years, hops also grew wild at Pukawa, on the western shore of Lake Taupo, at the old Mission House site. They were introduced by Rev. Thomas Grace for making the yeast for the mission’s bread. Unfortunately, the last plant now seems to have disap­peared. I wonder if there are any other solitary vines around, relics of pioneering days. 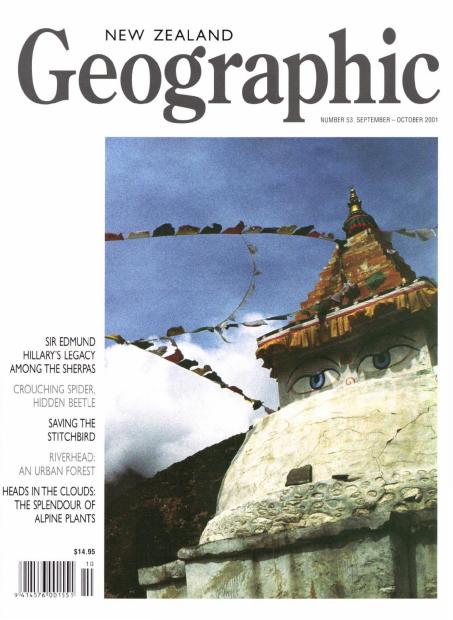