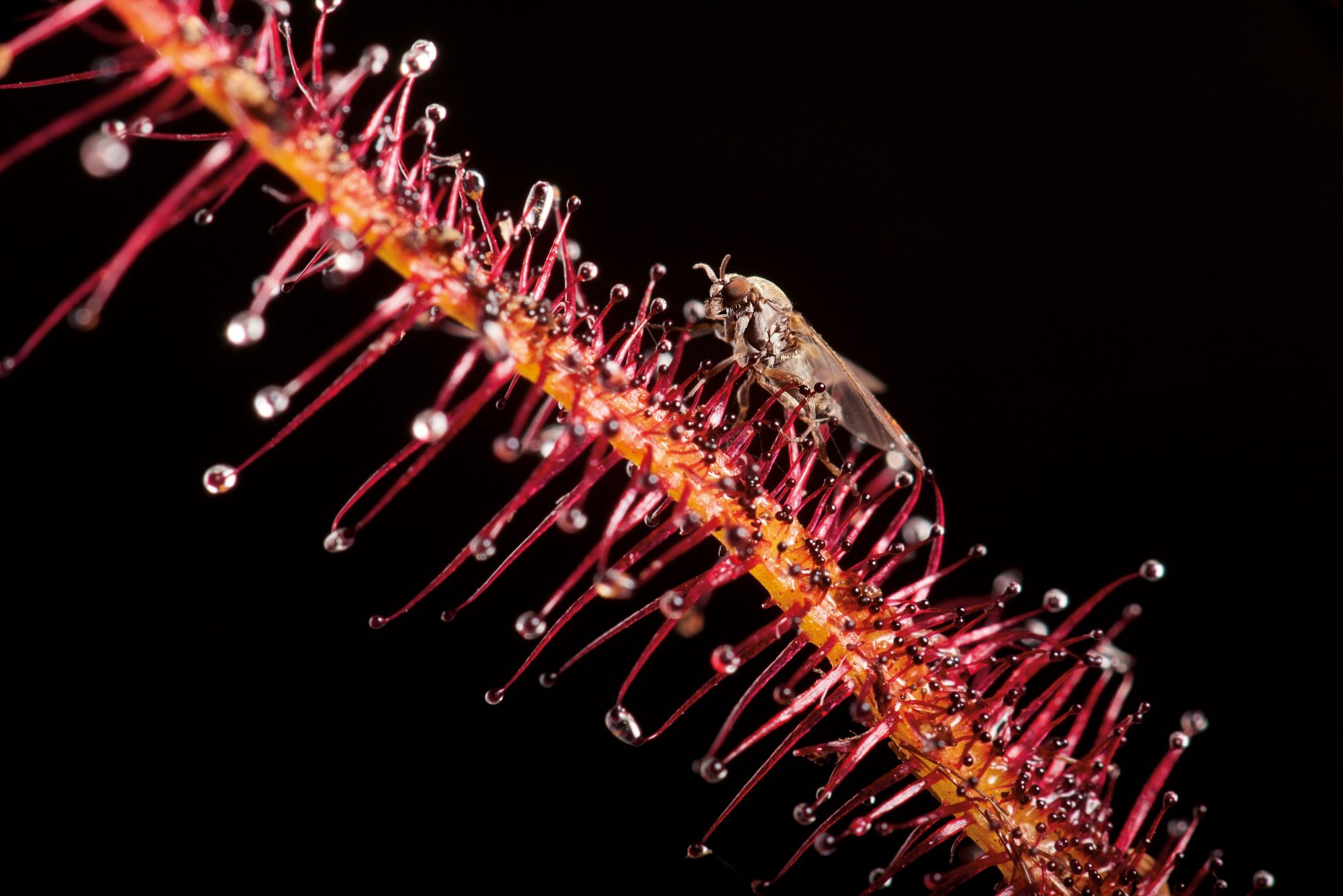 The Arthur Range is waking from a cold sleep. At last, the winter clouds are melting, admitting the first sun. As it creeps across the marble hills, life warms to its touch. Through winter, butterflies and hover flies have lain limp, stunned by the bitter grip of snow. Now they come back to life, creaky joints stretching to the sun. The tussocklands will soon be a buzz of flying insects seeking nourishment.

There is other life, too, stirring in the cold, damp ground. Shapeless, wizened, little more than tiny brown clumps. They’ve survived the solstice, entombed in snow. These are the undead, and now they’re hungry for living flesh. Summoning their meagre reserves of energy, they sprout tiny green tendrils 50 millimetres long, then unfold into bright red symmetrical lobes.

Along their margins tiny tentacles arise, capped by viscous blobs glistening like dew in the morning light. Hover flies, attracted to the sweet secretions, land upon them, and sink into an inescapable mire. Mucilage envelops them, asphyxiating the insects by clogging the spiracles through which they breathe. Those that don’t suffocate die from the exhaustion of struggle. Within 15 minutes, it’s over. Now the sundew produces necrotising enzymes—esterase, peroxidase, phosphatase and protease—that dissolve the insects’ soft parts, releasing proteins and nitrates that are absorbed through the leaves.

The plant needs its victims’ nutrients because these soils are thin and poor. The sundews and their cousins, the bladderworts, have made a niche of the country’s most hostile places—anaerobic bogs, acidic flushes and mineral-bereft swamps, poorly drained soils where water lies for weeks or months. By becoming meat-eaters, these plants have been able to colonise habitats too taxing for the competition.

Terrestrial bladderworts lie in boggy soils, trapping tiny protozoa and rotifers as they swim by. Others live submerged in ponds and lakes, eating larger creatures such as copepods, nematodes and mosquito wrigglers.

Bladderworts are not like other plants. For one thing, they’re not organised into roots, leaves or stems like most other angiosperms, and they have assembled sophisticated predatory organs, like the bladder traps. Lined with cells that produce sugary lures, the chamber— shaped a bit like a broad bean—is sealed at rest by a trap door that maintains a negative pressure inside. The instant any hapless prey bumps against it, the door deforms, buckling at the touch and creating a pressure differential that sucks the animal into the chamber. It happens so fast that only modern highspeed cameras have been able to capture the event.

The entire kidnap happens in barely half a millisecond—the fastest vegetable mechanics on Earth—and is so effective that bladderworts have been observed digesting the trapped tails of tadpoles bit by bit.

Within a general requirement for seasonal standing water, plant carnivores are cosmopolitan. They grow on every continent except Antarctica, in practically any environment that isn’t desert. Sundews, bladderworts, pitcher plants, fly traps, corkscrew plants and other creophageous kin top 16 genera. In New Zealand, we have only the most widespread two—seven native species of Drosera—the sundews— and four bladderworts, the Utricularia. You’ll find them in wet haunts and warm seasons pretty much anywhere—coastal bogs, clay cuttings, farm drains, seeps, peat swamps, lakes and high alpine quags—from North Cape to the subantarctic islands.

We have just two endemic species—one sundew and one bladderwort. All the others grow in Australia or the South Pacific as well, because they’re great hitch-hikers. Even a fragment of a stem, bound to the feathers of a seabird, can take root. Certain species are found dotted along the flyways of long-distance migrants such as godwits and ducks. Within New Zealand, waders like dotterels and oystercatchers carry the plants along the spine of the country. Others simply ride the wind—should a watercourse dry out, some aquatic bladderworts flower en masse, casting their genes to the sky in one last procreative lunge. Others shrivel back into tiny, hermetically sealed buds, or turions, to wait for wetter times.

Bruce Salmon was 13 when he spotted his first sundew, on a tramp in the Hunua Ranges south-east of Auckland. “I dug up my first plant and promptly killed it,” he confesses. But his efforts since have been about understanding and protecting our carnivorous plants: surveying, monitoring, describing, advocating. In 1985, he joined the New Zealand Carnivorous Plant Society NZCPS) and for many years served as its president. In 2001, he wrote an illustrated field guide that remains a standard reference.

The sundews are his fondest obsession. They’re spectacular, like little jewels that sparkle in the sun.” He’s spent years combing the country’s wetlands for sundews and bladderworts, and seen their fortunes turn. “The national park habitats seem to be okay,” he says, “but up north, a lot of swamps have been drained, including protected ones.” As dairy returns increased, observes Salmon, so did land clearance. “Farms used to have drains, and rough land, but that’s been lost as farms have been developed.”

Once, he says, carnivorous plants, secure in wetland strongholds, could have taken advantage of new habitats. “But nowadays, they have nowhere to come back from. It’s getting to the point where human intervention will be needed to sustain the tiny populations we still have.”

Some, however, have already intervened, and the pest plant register is sad testament to the fact that sometimes, enthusiasm spills over into zealotry. In 1999, Department of Conservation principal scientist Peter de Lange was walking in the Waitakere Ranges west of Auckland when he spotted something odd in a pond. “I was staggered to find it was full of pitcher plants,” he says.

The tubular pitcher, Sarracenia, is a native of North America, but birds didn’t bring it here—collectors did. Sarracenia flava now thrives in the Kaimaumau swamp in Northland, and on Mt Taranaki.

Plantings of sundews, bladderworts, butterworts, even Venus fly traps—often on conservation land—have since been discovered. The Convention on International Trade in Endangered Species (CITES) forbids trade in threatened plants or seeds taken from the wild, but not from cultivation. When DOC enforcement officers interviewed “key individuals”, says de Lange, “they discovered that people affiliated with the NZCPS had taken it upon themselves to plant these things in order to give them a seed base to trade from, as a way of getting around CITES”.

Collectors argue that they’re simply establishing reserve populations of threatened plants—giving them a helping hand. De Lange, though, is concerned that some of these exotic imports are crowding out our own native species. Utricularia gibba, an aquatic bladderwort, is now found almost worldwide. It arrived here sometime in the 1960s, and by the 1970s had spread through dune lakes and wetlands along Auckland’s west coast, the endeavour of one person.

But people aren’t always to blame. Another form of U. gibba was discovered in the Far North in the late 90s, and de Lange says that, given the area is a frequent landfall for migratory birds f rom Australia, it probably arrived naturally. Whatever the case, Utricularia is now choking wetlands and lakes from Cape Reinga to Waikato. “It’s serious beyond belief,” says de Lange. “This stuff is right up there with wandering Jew in terms of its impact on the environment.”

Burgeoning into thick, floating mats, aquatic bladderwort changes everything. “Light can’t penetrate the mats. A lake with gibba in it is often black and anoxic,” says de Lange. It’s also displacing our own Utricularia australis, which is now nationally endangered and may soon be listed as critical.

Bruce Salmon insists illicit plantings are a sideshow. “The real bad guy is the same the world over—habitat destruction.”

Certainly, life is about to get tougher still for carnivorous plants—alien or otherwise. As farming intensifies, hotter, drier days will shrink their contingent, watery world.

Up here, they endured the ice ages, but the carbon age will be a much sterner test.

New Zealand’s carnivorous flora is a mélange of migrants, and by international standards, paltry. Of 200 known species of bladderwort worldwide, we have just five, and seven sundews out of a global family of some 160 species. Most of our natives are also found across Australia and the South Pacific, thanks to their habit of hitch-hiking in the feathers of migratory birds. Others have arrived here as seeds; whipped aloft by fierce bushfire thermals in Western Australia, they then catch the Tasman westerlies to a new home.

Then there is a perplexing medley of aliens—pitcher plants, Venus fly traps, odd bladderworts from around the world—that have shown up in bogs and seeps across the northern North Island. These have been imported and planted by enthusiasts, to the ire of biodiversity managers.

The birds and the bees