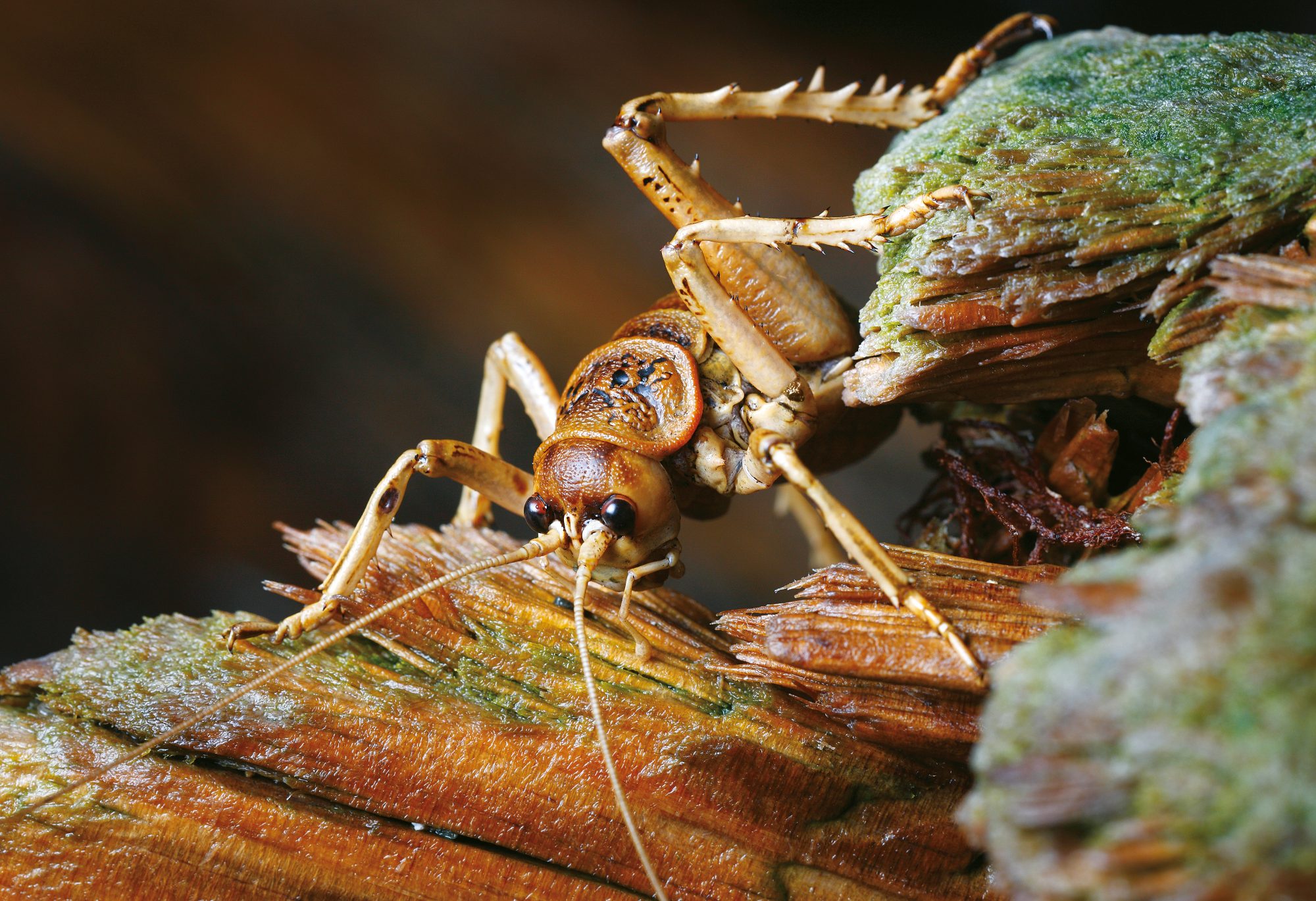 Cliffs rise to a parapet 100 metres high on the north-west coast of Mana Island, which gently slopes to the south-east like a great raft pitching in a turbulent sea. For centuries, offshore islands like this have been arks for endemic species plagued on the New Zealand mainland by the steady advance of pastoralism and invading hordes of rodents, cats and mustelids.

But Mana was not spared these ravages. It was culti­vated by Māori as early as 1400, occupied by Ngāti Toa in the 18th century, then cleared and farmed intensively for 154 years by Europeans producing some of the first wool ever exported from New Zealand. When restoration work started 23 years ago, the original vegetation was confined almost entirely to the cliffs and one small catchment.

But despite its harrowing history, three rare species clung to salvation on Mana—the goldstripe gecko, Cook Strait giant wētā, and McGregor’s skink. Today, after con­certed conservation efforts, including the eradication of mice, and planting half a million trees, the island is home to dozens of species threatened elsewhere in the country.

Few ecosystems are so peculiarly active after dark. After the Department of Conservation (DOC) rangers retire for the evening, after the lights click out and the generator utters its final death rattle, Mana sparks into life. Imperceptible to the feeble night vision of humans, a host of critters eschew the blinding light of day for the shroud of night, clattering about in the canopy of regenerating kohekohe, tawa and karaka, rummaging among the boul­ders on the shore or wading in the fertile ooze of Mana’s Waikoko wetland.

Their activities illuminated only by moonlight and the amber loom of sodium streetlights in Plimmerton seven kilometres to the east, they rely on acute senses and an array of adaptations that make nocturnal peram­bulations possible.

Some island dwellers, cold-blooded reptiles such as the extremely rare McGregor’s skink, have become extraordinarily efficient so they can hunt at night even in tem­peratures that would paralyse their diurnal cousins who go about their business only when fuelled by the warmth of the sun. Most lizards enter a torpid state in cold condi­tions, but Kelly Hare, a herpetologist at Otago University, has found that New Zealand skinks and geckos are among the most “fuel-efficient” in the world. Nocturnal species in particular are active in temperatures significantly below what their physiology is optimised for, pushing the limits of their range to occupy a unique ecological niche.

For other critters, such as the Cook Strait giant wētā, the absence of predators has removed constraints on physical dimensions, a phenomenon called island gigant­ism, allowing them to dramatically grow in size over generations. This is typical of many island ecosystems and the biological logic behind of some of the giants that once inhabited New Zealand, such as moa and Haast’s eagle.

But Mana Island is unique for another reason­: it is the site of the world’s most complex seabird translocation project. No fewer than 700 nestlings of three different petrel species were moved to the island over 11 years and hand-fed by volunteers who adminis­tered more than 11,000 meals of puréed sardines or krill through syringes or tubes.

The three species of burrowing petrels make a massive contribution to the island’s economy, as both importers and builders. After gathering fish at sea, they fertilise the land with their nitrogen-rich guano, which, together with the network of burrows they excavate, supports a large community of insects and other invertebrates.

DOC has now turned to technology to support the translocation efforts, creating what can only be described as a nightclub for sea birds. Fastened to waratahs atop the northwest cliffs is an array of speakers pointing out to sea. Charged by solar panels by day, they pump out a chorus of birdsong by night, designed to lure birds to the island from elsewhere in Cook Strait.

Photographer Rob Suisted, dressed in camouflage, positioned himself carefully among the artificial burrows at dusk and waited. First diving petrels wheeled above his head, then flew into the canopy. “Then this thing came in like a scud missile,” says Suisted. “Fairy prions are little birds, about the size of a fist, but they really travel.”

The prion landed on the clay next to him, settled down among the blooms of an ice plant and started to groom itself before his camera. It was emblematic of what he had come to expect shooting on Mana.

“During the day, what you see is what you get, but at night anything’s possible. Birds flutter through the trees as you walk through the forest. The place just feels alive.”

Giant cave wētās roamed around on the grass, giant leaf-veined slugs crawled through the vegetation. A clay face which is a sun-trap during the day became a landing pad for bugs by the light of the moon. It was literally cov­ered with geckos by the time the photographer walked past a couple of hours after dark. He found 10 more in the DOC house. One in his bed.

And Mana Island is still offering up conservation treas­ures. A juvenile wētā Suisted photographed took three entomologists to identify it, and might yet be an unknown species—its coloration was strikingly different from known examples.

As the native vegetation gradually en­croaches upon the grasses of its pastoral past, as the colo­nies of seabirds expand, as the populations of invertebrates grow in complexity and number, Mana will become one of the crown jewels of national conservation, a nocturnal wonderland, and a 217-hectare reference library for Cook Strait ecology.

Living on the edge