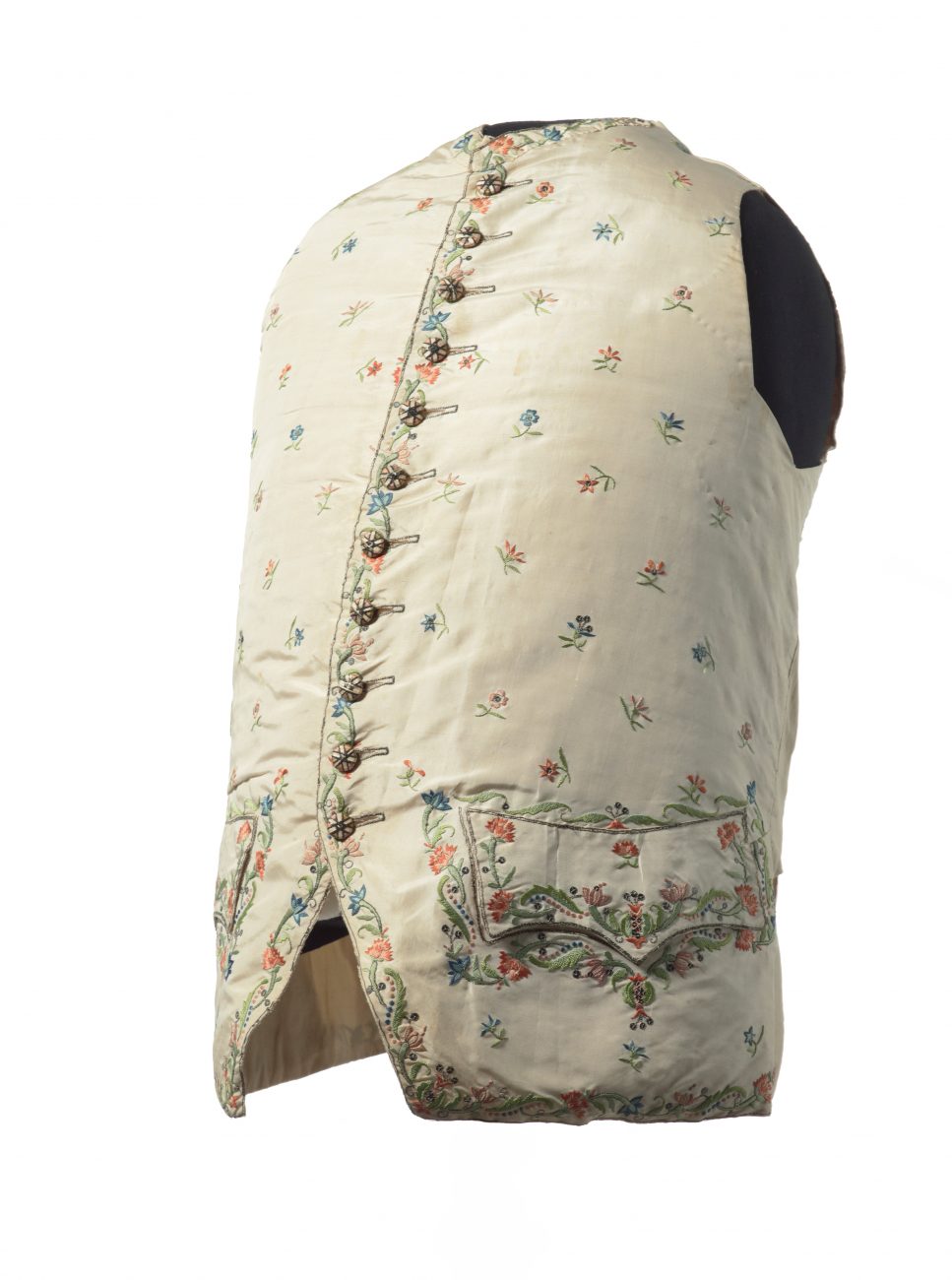 ‘James Cook’, read the label on this silk-and-linen waistcoat. The great explorer left it behind at a house he stayed at—or so the story goes. Did he overlook it in a chest of drawers? Was it an extravagant gift to the host? As a man of modest tastes, did he ever own it at all?

This garment, with its sparse tale of origin, was donated to Te Papa in 1967 by a Mrs Matthews. The label has been lost, and the waistcoat altered to fit a shorter, stouter man, but its length and high collar place its fabrication in the late 18th century, and the possibility surrounding its provenance draws textile historians and artists to the museum.

This waistcoat, however, has competition. The State Library of Victoria holds a cream wool naval waistcoat ascribed to Cook, unembellished apart from its 14 brass buttons. Meanwhile, the Australian Dress Register lists another embroidered-silk waistcoat reputed to have been worn by the explorer. This one is held in a private collection, as it has been since 1835, the year Cook’s wife, Elizabeth, died. Careful notes by collectors and antique dealers over the past 180 years trace it back to the Cook family. This waistcoat’s trump card, however, is its peculiar botanical embroidery, thought to resemble budding hibiscus, banksia seed cases and boronia flowers of the Cape York region. If it was indeed created in the late 18th century, the inspiration for its embroidery could only have been Cook’s first voyage of exploration to Australia in 1770.

But the waistcoat with the strongest connection to Cook is one that certainly never belonged to him. Cook returned from his second voyage bearing Tahitian tapa cloth, and upon his next departure, Elizabeth set about embroidering it. She backed the delicate bark-cloth with linen, and stitched a simple vine-like pattern from silk and metallic threads, adding a few sequins here and there. It’s a less elaborate pattern and more likely to be home-made than the silk waistcoats, which could have been commissioned from a professional seamstress, says curator Lindie Ward of Sydney’s Powerhouse Museum.

Cook never returned from his third voyage, the news of his death in February 1779 reaching Elizabeth in Mile End, London, 11 months later. The tapa-cloth waistcoat was never finished; the pattern pieces lay flat, never having been cut and tailored to fit a human body. Elizabeth eventually sent the pieces to Sydney, where it is now held by the State Library of New South Wales.

Elizabeth carefully preserved many mementos of her husband—his dress sword, a lock of his hair, his shoe buckles, his cutlery—but she destroyed the most personal: the letters they exchanged during the 13 years of their 17-year marriage that they spent apart.

After Cook’s death, Elizabeth is thought to have created an embroidered map of the western hemisphere, which traced her husband’s three journeys of discovery in a gossamer of tiny dots across the silk. In the end, she had the longest voyage of all; she outlived all of her six children, and survived James Cook by nearly 60 years.