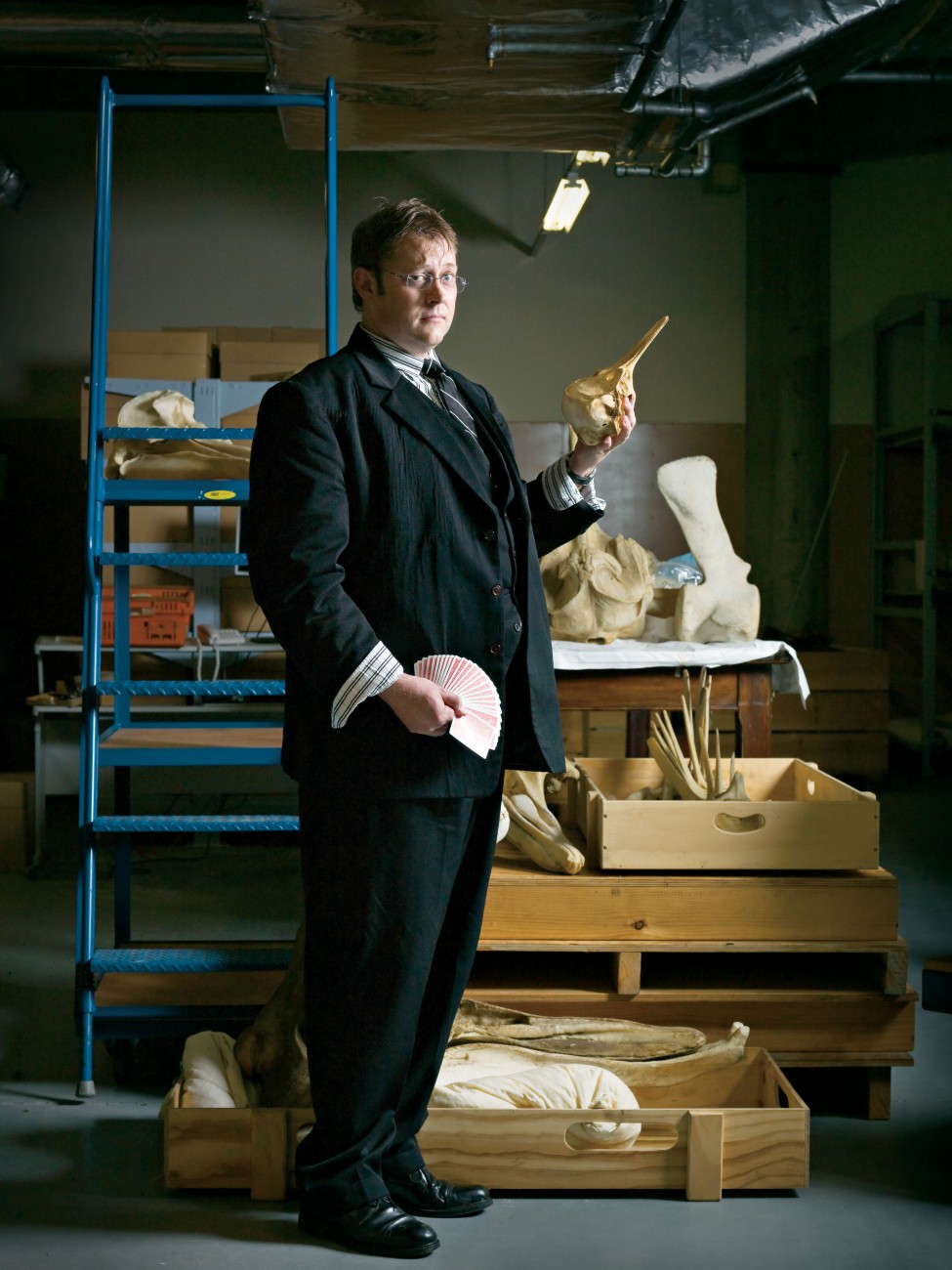 He then proceeded to perform a trick too complicated to explain here but which involved some sleight of hand that was both astonishing and impossible to fathom.

Performance has been something of a van Helden tradition: his mother juggled walnuts, his grandfather pushed pieces of paper through the table, his grandmother made mice out of napkins, and van Helden moonlights as a magician. He believes that we could all do with a little magic in our lives.

“Same sort of thing happens with science,” he says. “You’re standing on the edge of darkness with a torch and making discoveries and you get giddy with excitement. We don’t get that experience very often, but if you can create that great experience for people, shift their reality a little bit, it’s a nice thing to give.”

Beaked whales, says van Helden, “are the most enigmatic group of large mammals on Earth”. There are 21 species, 12 of which are known from New Zealand waters. They dine on squid and other soft-bodied creatures, hang out in the deeper parts of the ocean, and each species has its own multi-chambered “unique stomach arrangement”. Otherwise, little is known about them. If it weren’t for the occasional stranding, we wouldn’t even know that many of them exist.

Take the spade-toothed whale, christened as such by van Helden and colleagues after a 19th century whaling spade. The spade has a long flat blade with a small hook at its end. Most male beaked whales have a single pair of erupted teeth. It’s decidedly weird dentition—a single overbite on either side of its lower jaw. (Females also have teeth, but they don’t get large enough to grow through the gum.)

All that is known about the spade-toothed whale comes from three sets of remains. There is a lower jaw with two teeth, found on Pitt Island in 1872, which James Hector described as a strap-toothed whale. He was refuted the next year by John Edward Gray, the British zoologist, who described it as a new species. It was later synonimised back with the strap-toothed.

Then there was a cranium found in the 1950s at White Island, believed to be from the ginkgo-toothed beaked whale, stored away at the University of Auckland and largely forgotten about. And there was the damaged skull that washed up on Robinson Crusoe Island off the coast of Chile in 1986, which was classified as the Bahamonde’s beaked whale.

Using both morphological and molecular techniques, and working with researchers here and in Chile, van Helden was able to establish that all three museum-held remains were from the same species. Gray was right, it was a distinct species, and so along with a new colloquial moniker, it got its original Latin name back, Mesoplodon traversii.

“That’s what we call resurrecting a species,” says van Helden. “And what was really cool about it, for me, is that it epitomises why we have museum collections. We collect things through time, we gather information slowly and carefully, and by holding things in perpetuity we can reinvestigate those specimens. Science is not a collection of facts. It’s a collection of contestable ideas.”

But if nobody has seen the spade-toothed whale in the wild, and the last bone fragment was found over two decades ago, is he sure the thing is still out there?

“Yes, I mean these [skulls] didn’t fall out of a cliff as fossils,” he says. “And for them to end up in South America and New Zealand there must be a population of them that will live around the Southern Ocean.”

This, he says, is the remarkable thing: “These are one of the biggest animals. They range over vast distances and dive to great depths. They’re probably five and a half metres long, they have to come to the surface to breathe, but we’ve never seen one. It shows what else might be out there that we have no idea about.”