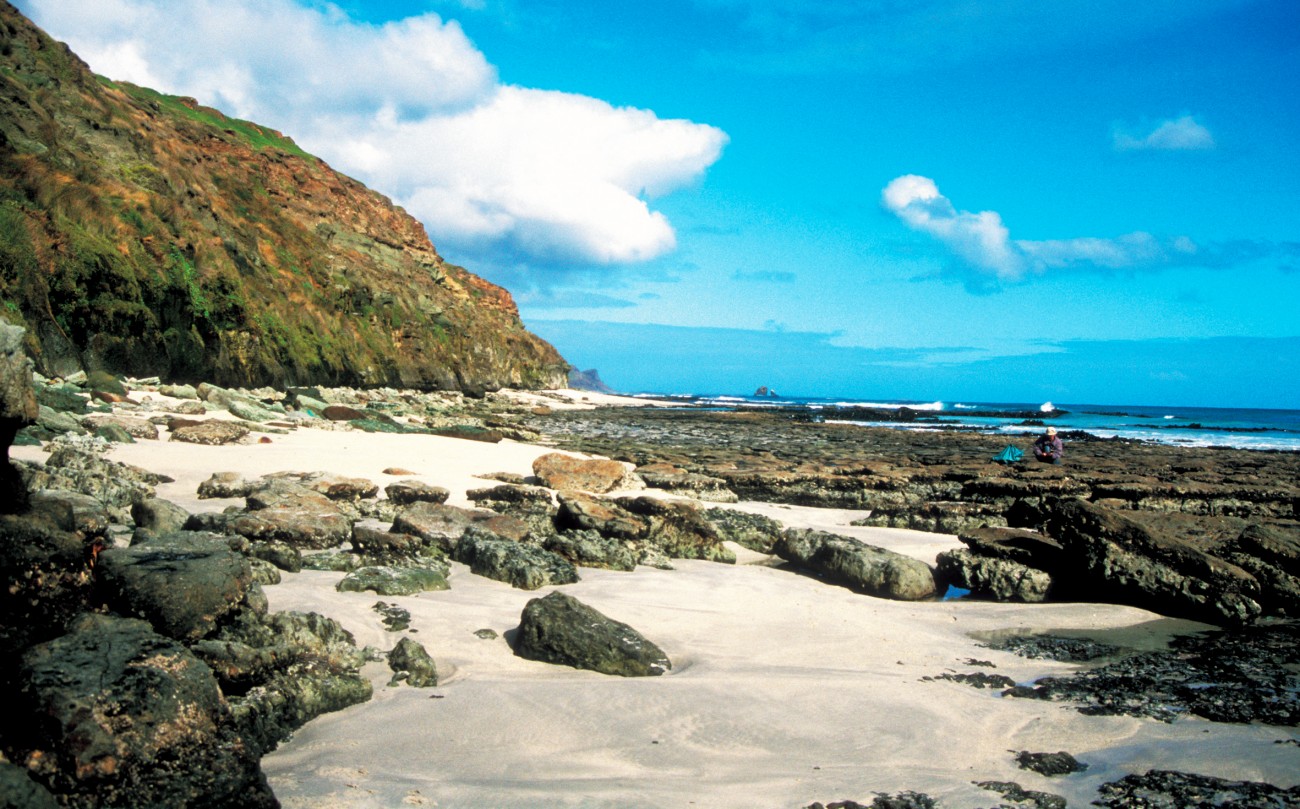 In January it was announced that a large deposit of dinosaur bones and other fossils had been discovered in the north-west corner of Chatham Island. Finds at the site included at least three kinds of carnivorous dinosaurs plus other probable dinosaur remains, marine reptiles, sponges and molluscs, and even ancient plant material, including spectacularly preserved pine cones.

“A find of dinosaur bones of this magnitude in a new region is rare in paleontology,” says Dr Jeffrey Stilwell of Monash University in Melbourne who made the initial discoveries, “In the Southern hemisphere, the last comparable discovery of dinosaur bones would have been in the Transantarctic Mountains 15 years ago.” Within New Zealand, the Chatham Island site is only the third location where terrestrial dinosaur remains have been uncovered. The other two sites are Mangahouanga Stream in Hawke’s Bay and a single Jurassic bone from Port Waikato.

Stilwell completed a PhD in molluscan paleontology at the University of Otago in 1995, and he and a student then visited the Chathams, “mainly on a hunch I’d got when comparing the list of fossils found on the Chathams with those found in mainland New Zealand. What we discovered on our reconnaissance visit was a wave-cut platform of silicified sandstone and conglomerate—the Takatika Grit—where a number of bones were visible. I remember thinking, ‘this is a place that holds a lot of secrets’, but I didn’t have the funding or time to pursue the issue further. Still, every summer I’d have a pang about returning to the Chathams.”

Only in 2003, thanks to a small grant from James Cook University in Queensland and the generosity of the private landowners where the site is located, was Stilwell finally able to return. With him were Monash University PhD student Chris Consoli and University of Otago palaeontology technician Andrew Grebneff. Together the three began to unlock some of the site’s secrets.

Finds in 2003 and 2004 from the 2 km long, 70–75 million year old, 10 m thick formation included toe and finger bones, a vertebra, partial tibia and claws. These came from two or three species of terrestrial theropod dinosaur, one a carnivore estimated to be 8–10 m long weighing many tonnes, and a second only a metre long. There were also bones from three marine reptiles (two mosasurs and one elasmosaur), teeth and vertebral discs from an astonishing nine families of sharks, plus some fossilized molluscs and sponges and the pine cones. I asked Stilwell how the terrestrial and marine fossils came to be together in the one formation. “The remains were preserved in a shallow marine environment, in something like 75 m of water close to shore,” he replied. “The dinosaur bones could have washed down rivers or the animals died then ‘bloated and floated’ for a distance before sinking to the sea floor.”

According to Stilwell, the Chathams have always existed as rather low-lying land east of the New Zealand mainland, although he thinks that at the time these dinosaurs were dying, a finger of land connected the Chathams to the rest of New Zealand.

Stilwell and his team have been back to the Chathams this summer and have made further discoveries that they are excited about. “What we believe we have discovered on our most recent trip is remarkable. We’re writing up our fi­­­ndings right now and hope to be able to release details in the near future,” Stilwell cryptically comments.

Of plants and seabird guano

In January and February, Department of Conservation (DOC) botanists Peter de Lange, John Sawyer and Amanda Baird, along with Landcare Research biosystematists Peter Heenan and Rob Smissen carried out an extensive botanical survey of the Chatham Islands. In the course of their field work, they found the endangered Poor Knights spleenwort and three plant species not previously recorded from the Chatham Islands.

One of these, Schoenus fluitans is a semi-aquatic sedge of such unassuming character that the field team didn’t initially recognise the plant they’d brought back samples of from several peat bogs on Chatham Island. Since the at-risk sedge has previously only been found on the volcanic plateau and Ruahine Range, it was not something they were expecting to meet.

Two daisies, Senecio marotiri and Senecio sterquilinus, were discovered on South East Island and on Western Reef, off the main Chatham Island, respectively. The daisies were both known from other locations around off-shore islands and mainland New Zealand but finding them in the Chathams was a surprise.

The discovery of S. sterquilinus, also known as muttonbird groundsel, on Western Reef seems particularly remarkable, since the reef may be completely submerged at times, making it a challenge for any terrestrial plant to cling to life there. The plant is described as “guano-loving”, and the reef is an area where seabirds congregate, so the birds may somehow transport seeds there.

This species is likely a vestige of a seabird-driven ecosystem, according to Peter de Lange. “Bob Ornduff coined the term ‘ornithocoprophilous’, which is a polite way of saying an ecosystem based on organisms that love bird excrement,” says de Lange. “The fragments left of this ecosystem suggests that New Zealand was once an archipelago whose flora and fauna was largely driven by seabirds. They brought in nutrients from the sea with their excrement and the disturbance they caused in nesting spread it about somewhat. If this is the case, and I think the evidence points that way, it becomes incredibly important to take a more holistic approach to conservation efforts.”

The Poor Knights spleenwort (Asplenium pauperequitum) is not thriving in its namesake home. A specimen of the fern had been collected on the Forty Fours in the Chathams in 2005, so de Lange was hopeful that populations of the nationally endangered plant would be found elsewhere around the islands. Still, the discovery of more than 530 individuals at four different sites on the main Chatham Island—two at Point Somes, one at Te Koparuparu Bay and one at Ocean Bay—may have been the high point for the expedition. There could well be more specimens on the Chathams than at the Poor Knights. The discovery may also mean that the fern will be found elsewhere in New Zealand. De Lange comments, “Coming upon those plants was one of those occasional astonishing moments you get in field research. The rest of the team was doing some plot work nearby and I thought I’d have a look around. I was skirting a poor shark-mauled seal that seemed to be in the last throes of life when I looked over and saw the ferns.”

The new finds are a huge boon for one of our most endangered ferns. Seemingly impossible to grow in captivity and with wild Poor Knights populations prone to “boom-bust” cycles that may relate to weather patterns, botanists have been struggling to manage the species for the last decade.

However, there is a caveat. Because the spleenwort’s ecology on the Chathams differs from that on the Poor Knights, it may turn out that the Chatham Islands’ spleenwort is a distinct subspecies. On the Chathams, the plant grows in profusion in exposed cracks on schist and greywacke and seems to be less sensitive than it is in the Poor Knights where it is restricted to rhyolite in dark and damp crevices.

Later this year, DOC will publish a checklist of all plants on the Chathams, including these recent finds. To date, that’s a list of 718 different species, including 412 indigenous and 306 naturalised species. Forty-six of the plants on the list are restricted to the Chathams and 23 are still unnamed. Future expeditions will likely add to the list again!

Until a few years ago, the Chathams had 11 species of native freshwater fish, all of them shared with the mainland. Then in 1994, Charles Mitchell discovered a new species in a peat lake (Lake Tuku a taupo) that was endemic to Chatham Island. Originally, the fish was thought to belong to the whitebait genus Galaxias and described as G. rekohua, however, recently it has been recognised as a mudfish and is now Neochanna rekohua.

Mudfishes belong to the same family (Galaxiidae) as whitebait but differ in certain respects. Most have reduced pelvic fi ns or lack them entirely, the eyes are reduced and the nostrils are long and tube-like. The fish can apparently aestivate in mud, peat (abundant on Chatham Island), or even in quite dry ground when waterways dry up during summer. Their name comes from this habit. James Hector, a geologist, found the first mudfishes, describing that they were found:

“at a depth of 4 feet from the surface, in a stiff clay embedding roots of trees…enclosed in hollows in the clay; and that when first extracted they moved freely, if placed in water they get sluggish and soon die… I believe that the early settlers in New Zealand were frequently much astonished by digging up fish along with the potatoes they had planted in the rich swampy land—a natural bounty which they were not prepared for”.

The ability to survive out of water for prolonged periods is probably related to the habitats these fish live in—typically swamps and boggy creeks where the water is shallow and prone to seasonal disappearance.

There are now five different mudfish known from New Zealand, all freshwater and non-migratory, but they are related to an amphidromous Tasmanian mudfish (N. cleaveri) which has a whitebait-like marine juvenile phase. This Australian species seems to have particularly close affinities with the Canterbury mudfish (N. burrowsius) and the new Chatham mudfish, and is possibly a distant progenitor of all New Zealand mudfishes.

Since the original discovery, the Chatham mudfish has been found in a second south Chatham Island lake (Lake Rakeinui) and in a stream near one of the lakes by Nadine Gibbs and a DOC monitoring team. The fact that the stream environment is somewhat different from that of the lake gives hope that the fish may turn up in other areas and environments around these ever-surprising islands.