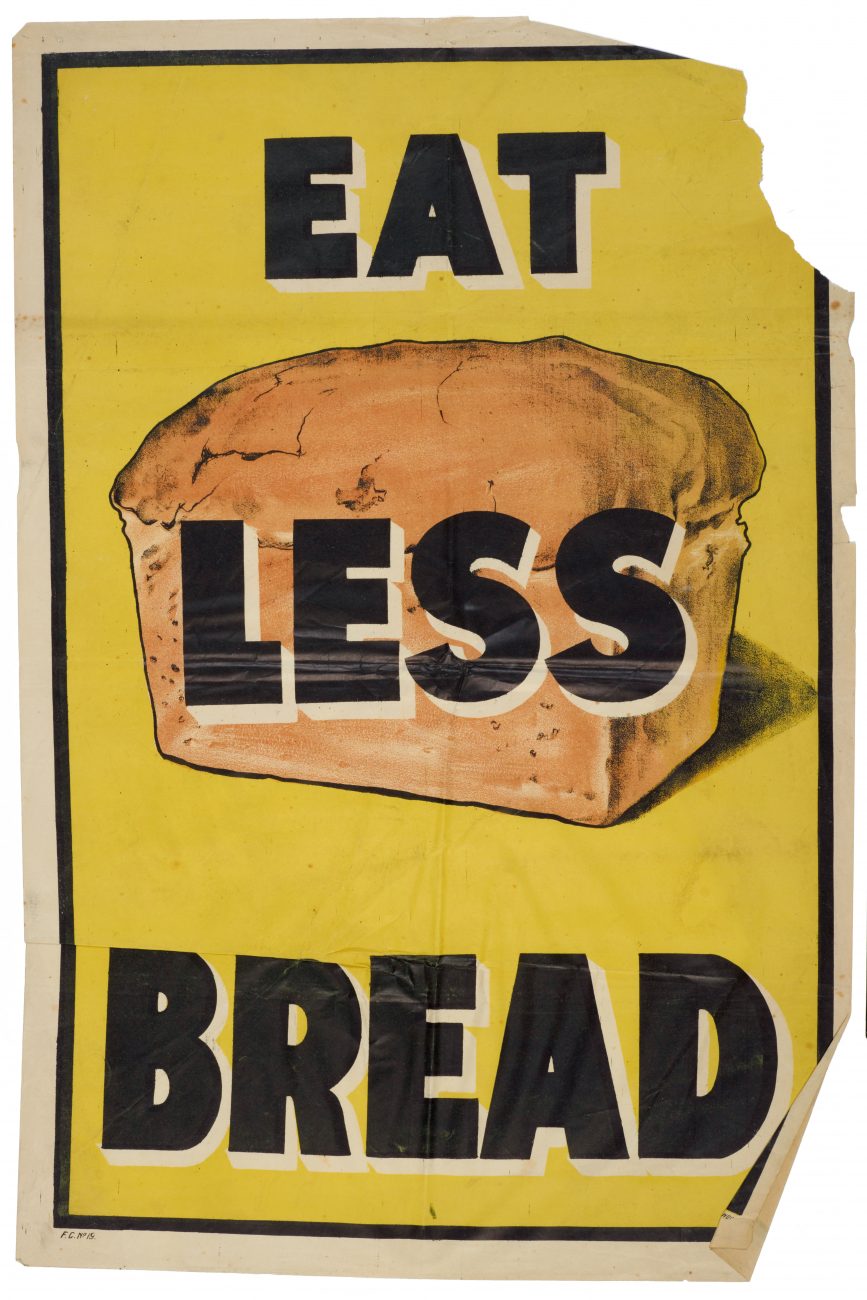 When Germany Blockaded Britain with U-boats during World War I, food shortages hit the country hard. Just three years earlier, Britain had been the world’s leading wheat importer, but by 1917, 400 ships were being sunk each month trying to deliver provisions to the British Isles. Rather than impose rationing, the Minister of Food Control, Lord Rhondda (David Alfred Thomas), mounted a publicity campaign to encourage mealtime frugality.

This poster is one of a series printed by the British Ministry of Food in 1917. Others are equally arresting, bearing messages such as ‘Save the wheat, help the fleet’, ‘Let your shopping help our shipping’ and ‘I risked my life to bring you food’.

But food was just one subject of the British wartime poster effort. A far greater number were produced to encourage recruitment, often slyly manipulative in tone: one depicts a small boy playing with toy soldiers and asking, ‘Daddy, what did you do in the Great War?’

The New Zealand government opted to import these posters in bulk rather than produce its own. “Britain had more of a poster tradition, better technology, and a special parliamentary recruiting committee set up­ their job was to produce propaganda mate­rial,’ says Stephanie Gibson, Te Papa’s curator of contemporary life and culture.

Posters were put up everywhere: train stations, banks, post offices, tram cars, passenger ships, factories. They were also imported in the form of lantern slides, which could be shown in cinemas.

The government produced posters occasionally to address local matters, such as conscription or fundraising through the purchase of war bonds, or ‘Liberty Loans’. They are text-only, and less bright and bold than the propaganda imported from Britain or, occasionally, Australia.

War posters had another use that their creators didn’t foresee. Long before the Great War’s conclusion, people were planning how to commemorate it. “I’ve seen lots of evidence that as soon as posters were published, people were collecting them—not for themselves but for the ‘greater good’,’ says Gibson. “Everybody brought something home.’

From 1917, Wellington’s Dominion Museum (later Te Papa), aided by the New Zealand War Records Section in London, began to accumulate memorabilia destined for a great New Zealand war museum. This poster was a gift of the British Department of Defence to the planned museum in 1919. But it was never built, and the collection was eventually distributed around New Zealand.

Almost a century later, the message within this poster is a familiar one, but for an entirely different reason. These days, the problem is a surfeit of wheat in the diet rather than a lack.