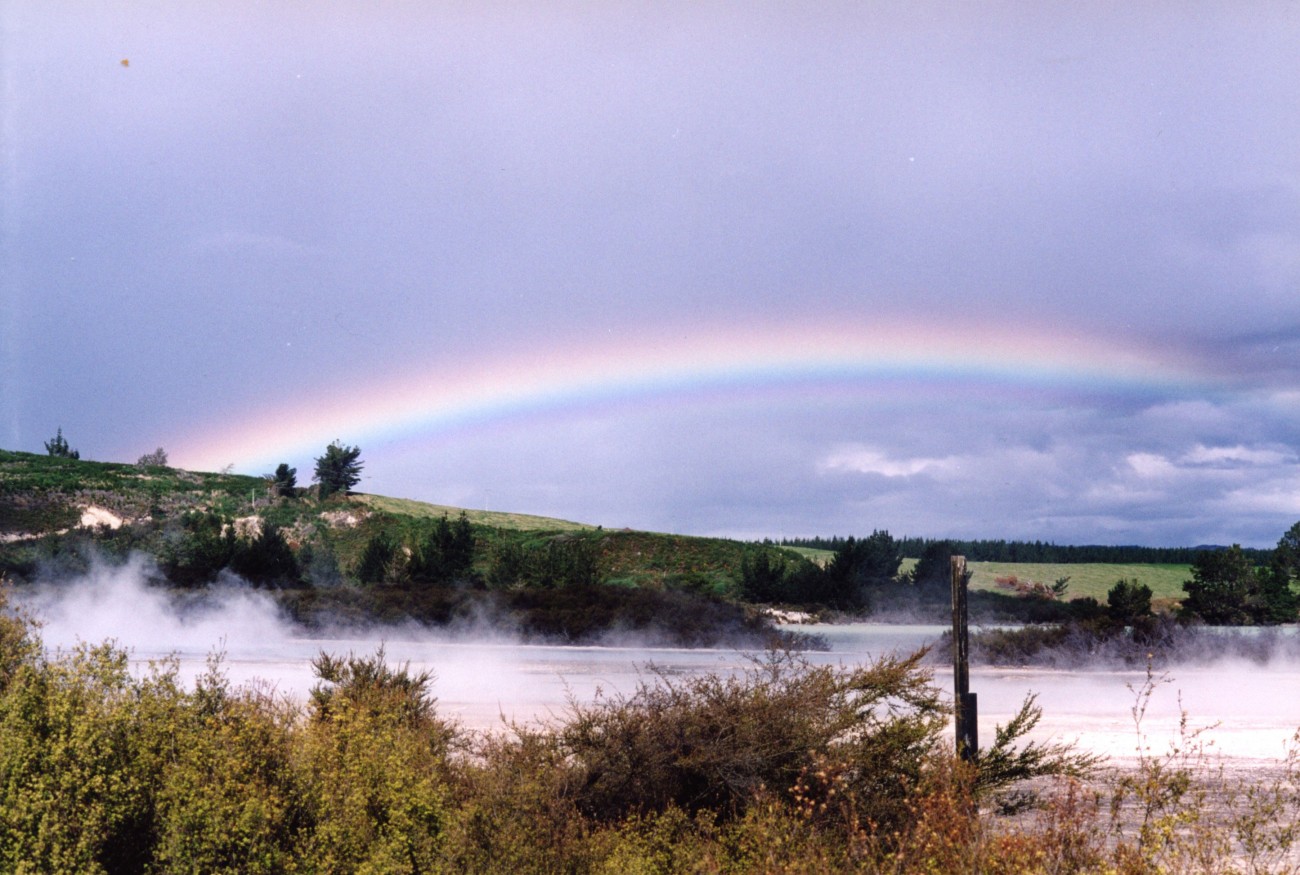 Due east of the lake that gives the area its name, stunted kanuka and rampant feral pines hide a jumble of acid-bleached pumice mounds. In their midst, and easily overlooked by the inattentive visitor, are some of the more spectacular sulphur crystals to be found on the New Zealand mainland.

Deposits of sulphur are common throughout the Taupo–Rotorua­ White Island thermal region. In a number of places they have been ac­tively mined, including at Rotokawa itself, where an estimated 17 million tonnes of sulphur underlie the sur­face. More modest accumulations often form on the surface about fumaroles and hot springs. At Tikitere and Waiotapu, small, yellow, en­crusting masses are exhibited to the public behind glass that helps keep prying fingers at bay. But those at Rotokawa put these others to shame. Here, splendid stalactitic masses of bright, lemon-yellow needles grow above steaming vents.

As in other New Zealand thermal fields, numerous vents at Rotokawa discharge vast quantities of steam, along with the gases hydrogen sul­phide and carbon dioxide. Much of the steam condenses about the vents. It forms moist films upon any available surface, be it rock, plant or soil. The gases either escape into the atmosphere or dissolve in surface waters, including the films of con­densate.

Once in solution the hydrogen sulphide readily oxidises. Depending on the presence—or absence—of other substances, the sulphide is converted to sulphur or sulphate.

In the first instance yellow sulphur crystals are deposited on the surface, while in the second dilute sulphuric acid is produced that attacks rocks filmed by condensate. The results of both processes can be seen at Ro­tokawa.

The most spectacular sulphur crystals at Rotokawa are found in a pumice bank some 5 m high. Along this bank a number of steam vents gently exhale over a horizontal dis­tance of some 10–12 m and about 1.5 m up the bank. Pendulous en­crustations of sulphur crystals have developed above, around and below each vent, and extend upslope for over 2 m.

Each accumulation consists of ropy parallel strands composed of open-packed clusters of acicular, yellow crystals. Each cluster con­tains one or more central, pendant needles up to several centimetres long, while each needle consists of a single sulphur crystal from which smaller crystals branch, form­ing an open, skeletal structure.

Droplets of con­densate collect on the tips of the sulphur crystals near the vent. It is within these drop­lets that the dissolved sulphide is oxidised and, as a result, adds a minute increment of sulphur to the tip of each growing needle.

Away from the im­mediate vicinity of each vent, the sulphur crystals pale, as if bleached. Crystal size becomes notably smaller than at the vent, and the clusters are more closely packed. At a still greater dis­tance, the encrustation is reduced to a thin, rather massive layer, resem­bling coral. It has a beige hue and consists of microscopic crystallites.

Beyond the zones of sulphur deposition, the pumice surface ap­pears fused. Pores are partially filled or even obliterated. A close inspec­tion shows the surface to be coated in a thin, white, glistening rind that in places appears rumpled and, elsewhere, resembles a mass of scal­loped flounces.

The limits of sulphur deposition mark the point at which oxidation of sulphide to sulphur ceases. Beyond, production of sulphuric acid domi­nates, the acid dissolving the sur­rounding glassy pumice. A by-prod­uct of the corrosion of the rock sur­face is the formation of pure silica, which precipitates as pH conditions change within the condensate film. It is this silica that forms the glisten­ing rind, for which mineralogists have coined the name silica residue to distinguish it from the silica sinter deposited about hot springs.

The unspoilt charm of this re­markable New Zealand outcrop is enhanced by its isolation. The gentle hissing of the vented steam is disturbed solely by bird calls, burps from adjacent geothermal pools, and the occasional rumble of a distant logging truck. Access requires a good trek along several kilometres of logging roads. Although the site is well worth a visit, permission is required from both the Department of Conservation and Ngati Tahu. Visitors always need to be on the alert—the area can be lethal.

For those chasing that ever-elusive evidence of life on Mars, the Roto­kawa sulphur crystals hold special fascination.

The precipitation of sulphur and the generation of sulphuric acid can be described in terms of sim­ple inorganic chemistry as outlined above. However, numerous bacteria are known that can tap the small amount of chemical energy stored in a hydrogen sulphide molecule and use it to fix carbon. Such bacteria can facilitate reactions between the hydrogen sulphide and the dissolved carbon dioxide at Rotokawa to make organic carbon molecules plus sul­phuric acid: 6CO2 + 3H2S + 6H2O = C6H12O6 + 3H2SO4

Sulphide-oxidising bacteria such as Thermodesulfobacterium thrive in the dilute sulphuric acid that gives the water of Rotokawa its name. Their activity amongst the living crystals of Rotokawa’s bitter waters provide any would-be Martian sci­entist with a ready-made outdoor laboratory.