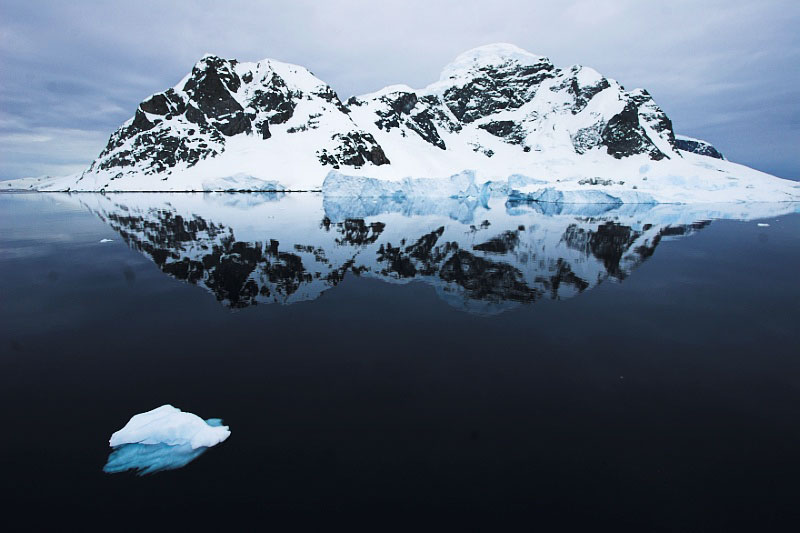 It strikes me as unusual that I would have to come to one of the coldest places on the planet to witness warming at its most extreme. But here I am, in Curtis Bay on the Antarctic Peninsula, surrounded by bash ice and bergs. All about me, tiny pieces of reticulated ice crackle on the surface.

There are splinters and crunches, sounds like shotguns as bergs split open and calve into the sea with a roar. Then penetrating silence, as if the entire continent is poised to collapse. Soon, the little voices in the ice begin to whisper again.

Each year, the great embayments of the conti­nent fracture and break up, colossal floes shearing from the permanent ice and drifting out to sea as tabular bergs nautical miles across and pan-flat on top. Six months later, the white conti­nent waxes again, building sea ice that will double its area.

Each year, the annual melt is greater, the freeze less substantial. Each decade, for the past five, average temperatures on the Antarctic Peninsula have risen by half a degree Celsius.

Seven of its great ice shelves have either retreated or completely disintegrated. Something is going wrong, and it started here first.

Rather than paring back on combustion and consumption, we’re doing more of it. Globally, greenhouse-gas emissions are accelerating: they grew more quickly between 2000 and 2010 than in each of the three previous decades. Emissions during the decade to 2010 were nearly 70 per cent higher than they were in the late 20th century. Half of all greenhouse-gas emissions since 1750 have occurred in the past 40 years.

New Zealand has been doing little to help. Our emissions have gone up 25 per cent since 1990. On average, each New Zealander produces twice the greenhouse-gas emissions of the average citizen of China, and around eight times those of someone living in India. We are now the fifth-highest emitter per person in the world—behind Australia, the United States, Canada and Luxembourg.

Rather than planting trees, we’ve been felling them: 151,000 hectares have been dropped since we signed the Kyoto Protocol. Pretty soon the trees felled during the forestry boom of the 1990s will be felled too, representing a huge carbon source rather than a carbon sink that currently offsets a portion of our emissions. Another problem is our love affair with ‘enteric fermentation’. In 2013 alone, our fields resounded as the digestive tracts of the national herd emitted 23,935 million tonnes of methane­ double the carbon-dioxide equivalent of all the vehicles on our roads.

This being election year, more hot air is circulating than usual. But the major parties remain muted on the matter of mitigation. “Best endeavours” with “minimal disruption to the economy” are the cautious words of one party leader as he implied that the forecast by the Intergovernmental Panel on Climate Change of 0.06 of a percentage point off annual economic growth to pay for a shift to a low-carbon economy would be too expensive. I don’t expect he’s done a calcula­tion on the annual cost of the droughts, storms and sea-level rise that projec­tions forecast. Indeed, the tide may need to slosh across the threshold of Parliament steps before climate science is respected.

The scientists cannot be more emphatic. If there were alarm bells, they would be ringing. Though I can’t hear them—down here in Curtis Bay, any sirens are drowned out by the cacophony of the summer melt.

Ernest Shackleton wrote of the “little voices” of the ice that would draw men into the unknown, away from trodden paths. Frank Wild wrote that he could “not escape the ‘little voices’… the wild will keep calling and calling forever in your ears”. For them, the little voices were the call of the wild. A century later, I wonder if the wild isn’t saying some­thing different.

In this special issue, the ice speaks loud and clear. New data, extracted from Antarctic ice cores, points to more dramatic change than scientists had forecast. The fate of the West Antarctic Ice Sheet will add metres to estimates of sea-level rise and dramatically alter the future tenability of coastal land the world over. It may be time to listen to the little voices.