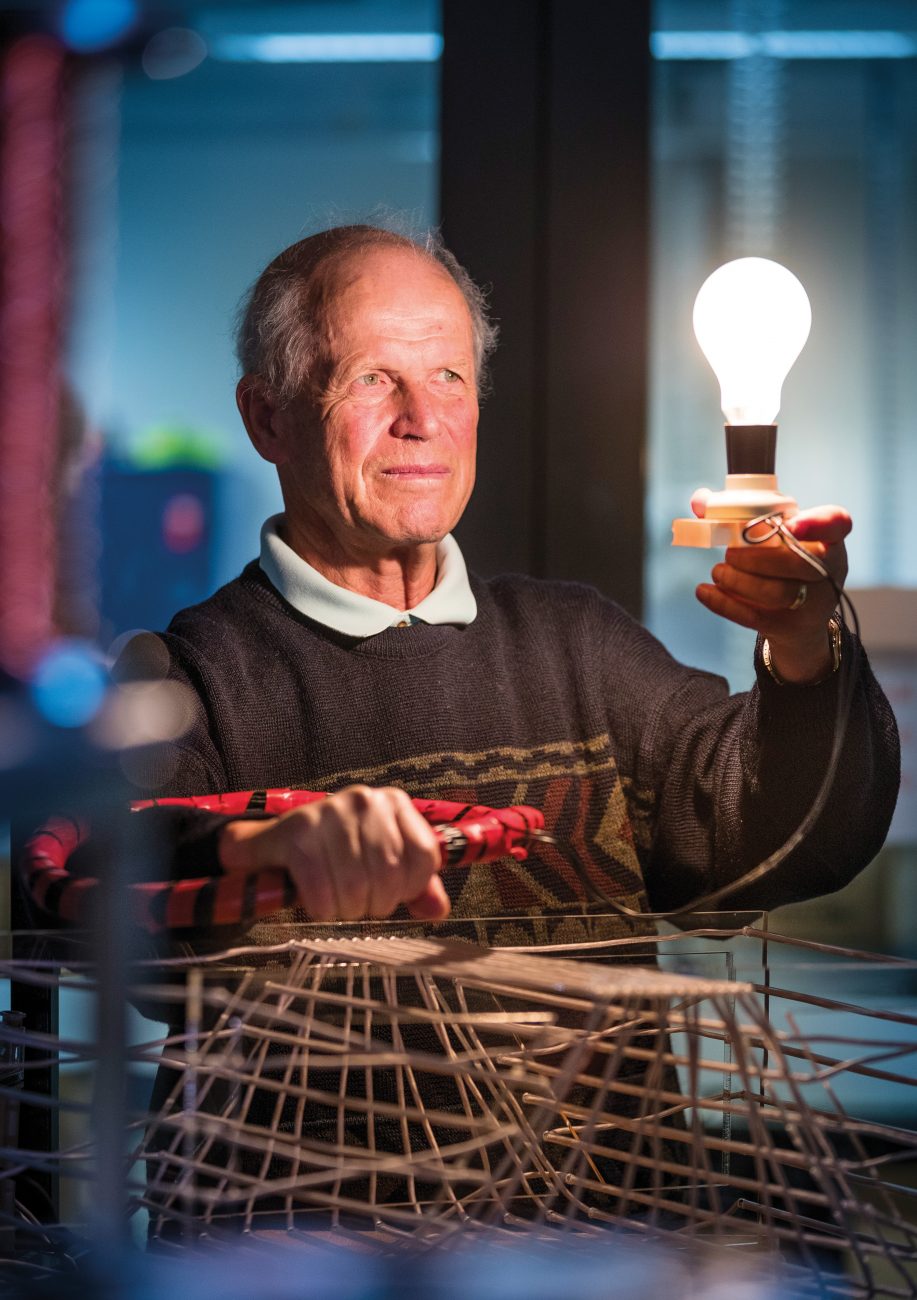 It’s an array of wire ribs on a rectangular Perspex frame, like the guts of a piano. The thick white wires are electrical coils, arranged to emit power in one direction. The other part is a black halo of wire bound together with red tape, connected to a single lightbulb. Hover the black coil above the white ribs—don’t let them touch—and the bulb glows. Electricity is crossing the air between them, without the need for a wire as a conduit.

This is the kernel of an idea that could make electric cars the norm and erase the tangle of cords behind the television cabinet. John Boys, its pioneer, has spent the better part of three decades improving it—an ongoing puzzle that sees him turn up to work every day at the University of Auckland, despite his 75th birthday being just around the corner.

So far, inductive power transfer (IPT) has been put to uses as diverse as street lights, security systems, theme-park rides and computer-chip factories. Around three-quarters of all flat-screen displays in the world are manufactured with IPT-motorised machinery, under licence from the University of Auckland, because it’s ideal for ultra-sterile ‘clean rooms’.

Leading the world in IPT technology has come as a surprise for Boys. He grew up in Invercargill without grand designs for the future, but when his father’s job at the Post Office caused the family to relocate to Hamilton, he found himself starting over, at 15, in a high school where he knew nobody. He took refuge in an abundance of science classes, and excelled. None of his family had been to university. “My mother was very keen,” he says. And his father? He pauses to consider. “If I’d played rugby it would have been better.”

But science was his preferred field of competition. He acquired a PhD (“which took forever”), and spent a stint in Ireland working for an American manufacturing company, a job he regretted leaving to return to family in New Zealand. (The feeling was mutual: his former employers flew him to Ireland every year, for more than a decade, as a consultant.)

Back home, Boys secured a position at the University of Auckland and put his mind to one of the biggest problems in electrical engineering: moving electricity without using wires. Previous attempts achieved either efficient transfer but little power, or plenty of power transfer but poor efficiency.

In 1992, Boys and his team built a prototype that used interfering magnetic fields to transport an electric current between two points. It was efficient, and powerful. It even worked underwater.

The next step was to commercialise the technology, but investor after investor rejected the concept—or told Boys that it wouldn’t work. He was unfazed. “We thought it was pretty good,” he says simply. He just needed to wait for someone who understood it.

It took two years, but when a top executive from Japanese manufacturer Daifuku visited Boys’ lab, he signed a contract with the university on the spot. Along with research partner Grant Covic, Boys’ new task was to develop IPT-powered machinery for Daifuku’s car-assembly plants.

Boys is an affable man with a ready smile, and it’s clear from a glance around his lab that work doesn’t feel like work to him—but this contract took things to a new level. He could Telex his new Japanese contacts asking for a part, and it would arrive in Auckland the next day, flown overnight, occasionally with the diplomatic mail. More than 20 years later, Boys still works closely with Daifuku: “We’re on first-name basis, now,” he says, delighted.

These days, Boys is working towards one more goal for IPT: cars. He tried retiring once, but he ended up back at the lab the following morning. When I visit, he’s supervising two students who are building an improved version of his wire-rib device, but this time, the white wires are coiled tightly on a flat surface, making a dome of power available above them. How long will it take him to solve this puzzle? “Electric vehicles are really a tough ask,” he laughs. “And if we can do it, it will be superb.”