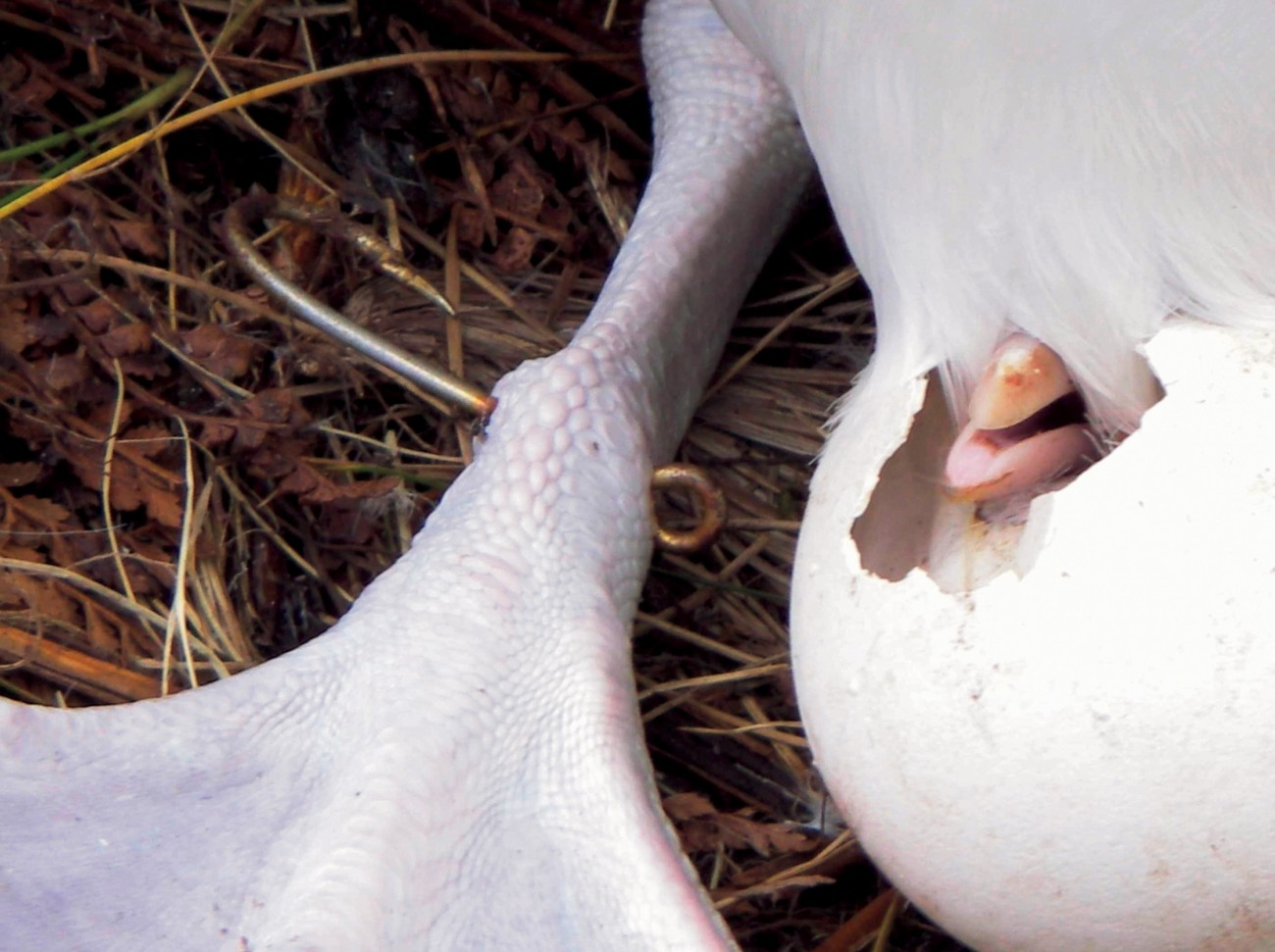 How does such human rubbish reach one of New Zealand’s sub-antarctic islands? Uninhabited and remote, these islands are protected as National Nature Reserves and collectively form a World Heritage Area. DOC is engaged in restoring these somewhat-modified islands by removing introduced animals such as sheep, cattle and rats. This is helping return the islands to their pre-hu­man glory. Vegetation is burgeoning on Campbell Island and small birds such as pipits and snipe are breeding again on the main island, having sur­vived the rat era by living on small offshore stacks. The Campbell Island teal, a flightless duck, was bred in captivity and these are now being released back on the island.

But despite these gains, the negative influence of humans is still felt on the islands. Peter and Stacy Moore of DOC have visited Camp­bell Island for several years studying the southern royal albatross popu­lation. They report that long-line hooks and plastics are brought back to the island by the albatrosses.

Albatrosses roam widely in New Zealand waters when breeding and cross the southern oceans to South America during their non-breeding periods. “Their scavenging lifestyle brings them into contact with fishing vessels where they can be acciden­tally caught and killed when they try and eat the hooked baits,” says Peter. Mfish, DOC and the fishing industry all are working to reduce bycatch, but internationally, not all fishing boats care about birds. “Our moves are making a difference, but with millions of hooks set in the Southern Ocean per year, as well as new fisheries and areas being developed, there is a continuing problem,” Peter adds.

Campbell Island is the strong­hold for southern royal albatrosses, hosting some 8000 nests annually. Since it takes almost a year to rear a chick, successful pairs only breed every second year. Birds are slow to mature and don’t breed until they are 6–12 years of age. “The oldest banded albatross we have found so far on Campbell Island is 41 years old,” says Peter. “Grandma”, a close­ly related Northern royal albatross at Taiaroa Head reached 60! “Most birds probably don’t make it into their 40s though,” states Peter.

Although Southern royal albatross is not considered a high bycatch species, the DOC teams encoun­ter some of the survivors of fishing interactions on Campbell Island. In February 2007 Stacy found a breed­ing bird with fishing line wrapped around its bill and protruding from its gape. “We caught the bird and pulled as much line out as we could until we encountered resistance and then cut the excess line away. Presumably a hook was caught in its gullet but rather than stress the bird further we released it back to its nest,” says Stacy. “There is no way of telling if the bird will survive,” she says. They find regurgitated hooks beside nests, possibly from discarded baits that birds swallow whole but they could be from birds that are hooked on long-lines and are re­leased alive by the fishers.

Occasionally they see birds with hooks embedded in their legs. Lucki­ly for the bird in the photo, the injury had healed and the team was able to remove the hook. Most likely the bird was accidentally caught when it tried to grab at baits as a long-line was brought in. Presumably a fisher then cut the line to release the bird. Obviously some birds are released with care by the fishers. “We have been surprised to find some birds with home-made bands made from fishing gear,” Peter says. “We don’t recommend that people make their own bands as they could potentially harm the birds.”

Because they are scavengers, albatrosses investigate any floating object they see. “They are attracted to plastic rubbish which they eat when they mistake it for food,” says Stacy. “We find weird and numer­ous pieces of plastic such as bottle tops, pens, cigarette lighters and squid lures, even childrens’ toys, beside albatross nests.” These items have been regurgitated by chicks or their parents along with other indigestible hard parts. “If too much plastic material is fed to chicks they could starve or dehydrate as there is no room for food, or be poisoned by organochlorines and other toxic substances in the plastic,” says Stacy. One estimate is that 5 tonnes of plastic are fed to 500,000 Laysan albatross chicks each year on Mid­way Atoll in the North Pacific and thousands of birds die as a result. Those birds fly in search of food over what has been described as the world’s largest rubbish dump—a huge rotating gyre full of plastic flotsam. “Although things are not as dire in New Zealand, judging by the amount of plastic we find on Campbell we can’t be complacent about our own throw-away society,” Stacy says.

Albatrosses, those magnificent denizens of the open ocean, need every help they can get to ensure they continue to grace our waters for generations to come. “We can help the albatrosses now by continuing to encourage fishers to reduce the chance of accidentally catching seabirds,” says Peter. “Casual littering on land or from boats will harm marine life, even at our remote islands, so we can all do our bit to keep our oceans clean,” says Stacy.