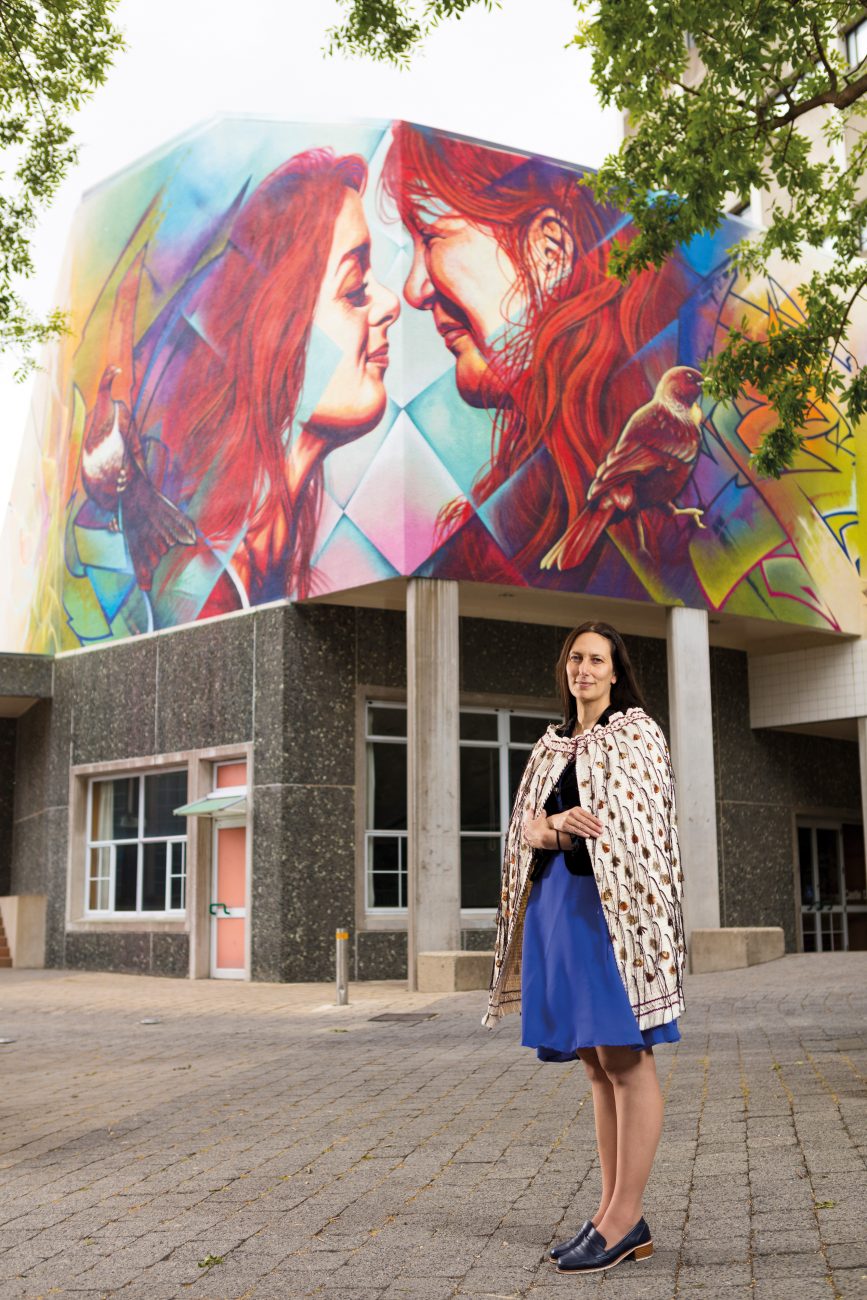 Growing up in Glenorchy, the village perched at the top of Lake Wakatipu, Jacinta Ruru’s backyard was Mt Aspiring National Park. In every direction there were mountains. The landscape had drawn her parents away from family in the north—her father’s whakapapa includes Raukawa, Ngāti Ranginui and Ngāti Maniapoto—and her father took up deer hunting, trapping, scheelite mining.

Ruru had “enormous freedom”, she says, but it came with a growing sense of unease. “We’d be up there on those mountains and those hills a lot and knew they were really important to Ngāi Tahu, but I really wondered where Ngāi Tahu were,” she says.

Even the peaks surrounding her bore the names of Europeans: Earnslaw, Larkins, Bonpland, Alfred, Christina. Where were Ngāi Tahu’s stories, and their names for the landscape?

Ruru’s parents always told her that she could go where they hadn’t been—to university—so the idea assumed the weight of certainty, even though she knew so little about it that it might as well have been a foreign country. Growing up, one of the few people she knew who had a degree was her next-door neighbour, and he’d hung it on the wall of his lounge, like a souvenir.

But Ruru hadn’t really thought much further than getting there. She simply chose subjects that her high school education hadn’t offered: politics, Māori studies, sociology. When she glimpsed a friend’s law coursework, and saw how the Treaty of Waitangi was being explored, she added a Bachelor of Laws to her Bachelor of Arts.

“I realised for the first time that law has the potential to be a really powerful discipline,” she says. “You can certainly be creative in terms of putting forward arguments to a court, or to Parliament. That legal training and that analytical thinking give you a really good basis to be of use to Māori communities.”

If law was the tool of justice, then she could wield it to correct injustice, Ruru reasoned.

In postgraduate studies, she returned to the national parks of her childhood, examining how they were described in legislation.

“I explored how and why the law could do better in recognising Māori relationships with land,” she says. “National parks are very clearly described in the law as places of scenic value, recreational value and scientific value—but we’re still completely missing any recognition that these lands are significantly important for Māori identity.”

In 1999, Ruru joined the Law Faculty of the University of Otago, and in 2016, became New Zealand’s first Māori law professor.

She continues to research the ways in which indigenous people can own and manage the natural world—land, water, minerals—both in New Zealand and overseas.

A decade ago, Ruru and one of her Māori students worked on the idea of ‘legal personality’, building on American law professor Christopher Stone’s 1972 argument that objects in the natural world ought to have legal rights, as people do.

“The work that I was doing was in the context of water,” she says.

“I wondered, could we neutralise that ‘ownership’ issue, move away from a debate as to who owns the water to thinking about, perhaps, the water owns itself? It is a tupuna—can our law recognise that?”

Through Treaty of Waitangi settlements, Te Urewera was granted legal personhood in 2014, and the law is the process of doing the same for the Whanganui River.

Ruru now teaches undergraduate law, incorporating a Māori voice within the study of a system that relies heavily on European ideas. In 2016, she won the Prime Minister’s Supreme Award for tertiary teaching—the highest award in the country for a post-secondary educator—which also granted her the guardianship of the woven Rauaroha korowai. (The same year, she was one of the first two Māori women appointed fellows of the Royal Society of New Zealand.)

Ruru’s students, accustomed to reading legislation and judicial decisions, also encounter short stories, poetry and Treaty claim settlements, which often incorporate creation myths in order to describe an iwi’s relationship with the land and the ways in which they draw their identity from it.

“I create those opportunities for respecting that we also have a Māori legal system, and how those stories themselves can help portray the laws or the values for Māori society,” she says. “It’s a different way of reading the law.”