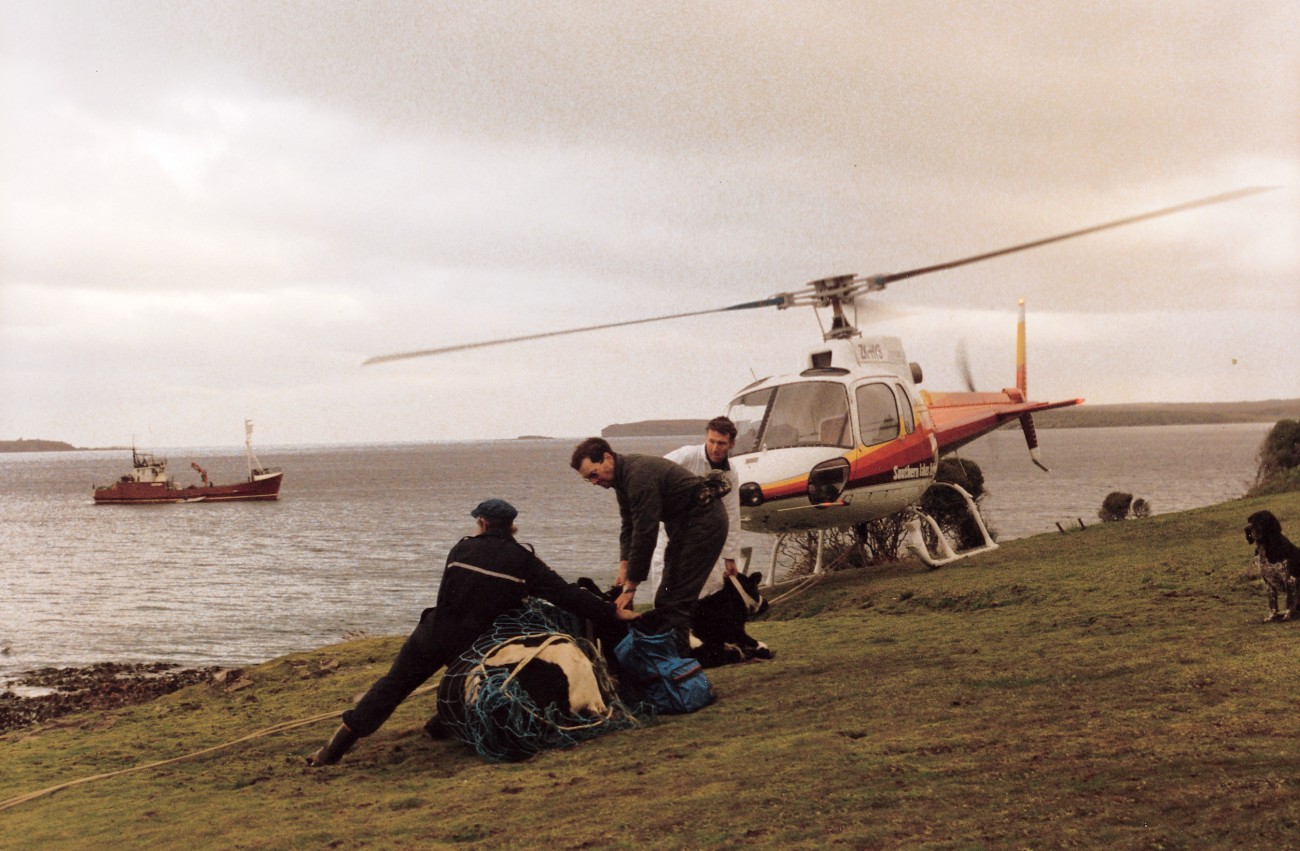 A unique breed of cattle from Enderby Island, in the subantarctic Auckland Island group, has been saved from extinction by a combination of luck and high technology.

Using the latest artificial breeding techniques, AgResearch scientists at Ruakura have produced a pure-bred calf from the last remaining Enderby Island cow, an elderly matriarch known as Lady. Lady survived against all odds on Enderby, evading one intensive cull and several subsequent attempts to rid the island of unwanted mammals.

The saga of the Enderby cattle began in 1895, when nine cattle and 20 sheep were landed on the 688 ha island to form the basis of a mixed farming operation. These cattle were either of shorthorn or Shetland stock it is difficult to decipher the original bill of lading.

The futility of trying to farm in the Auckland Islands described as having “the most miserable climate on earth” soon became apparent, and the venture effectively ceased in 1910. A few remnant stock were left behind to fend for them­selves in the dismal condi­tions. The sheep died out, but, surprisingly, the cattle survived in part because of their habit of foraging for seaweed when inclement weather precluded grazing on the megaherbs or tussock that form the natural vegetation of the island.

However, in tandem with rabbits (which had been introduced in 1865 to provide sustenance for shipwreck victims), the cattle put increasing pressure on the native flora and fauna of the island. The native South Georgian diving petrel became extinct on Enderby, and populations of the New Zealand sea lion and yellow-eyed penguin were adversely affected by the newcomers.

Under its mandate to protect the natural biota and environment, the Depart­ment of Conservation began to consider eradicating both cattle and rabbits. But as pressure to restore Enderby to its original condition mounted, so did awareness of the need to preserve the uniquely hardy Enderby cattle.

With restoration of the island and in situ preserva­tion of cattle incompatible, the Rare Breeds Conservation Society suggested establishing a breeding population of Enderby cattle on mainland New Zealand. The logistics and costs of getting live cattle off Enderby seemed insur­mountable, so it was decided to concentrate on retrieving eggs and sperm during the cattle culling operation: mature cows were to be autopsied to remove eggs, mature bulls to have sperm collected post mortem.

The extermination operation on Enderby went ahead in 1991. Hunters shot around 50 cattle during the three-week operation. The genetic heritage of the breed was assumed to be safe in the eggs and sperm that had been harvested and frozen. However, upon examination in New Zealand, none of the eggs proved to be viable, and much of the sperm was of poor quality.

On the assumption that no cattle had survived the cull on Enderby, the RBCS began a breeding pro­gramme using in vitro fertilisation of non-Enderby cows with Enderby sperm. After extensive efforts, seven half-bred cattle were born, all of which were bulls. This was not a useful outcome. Mating these bulls with other cattle could only dilute the Enderby genetic identity still further, with resultant offspring being just one quarter Enderby

Meanwhile, DoC learned to its surprise that a handful of cattle were still alive on the island, and continued its efforts to shoot them as opportunity presented, apparently unaware of the difficulties that the RBCS was having.

By the time the RBCS learned of the survival of some cattle, only a single cow and her calf remained. Logistical difficulties notwithstanding, the society decided it was imperative that these cattle be physi­cally removed alive from the island, and lobbied hard to gain permission to do so.

DoC was about to start poisoning the Enderby rabbit population, and agreed to allow the RBCS to use the facilities associated with that campaign to capture the remaining cattle and transport them to New Zealand. Unfortunately, the calf did not survive the trip, so hope for the survival of Enderby Island cattle became focused on one individual, a cow which was named Lady.

Although Lady by name, she proved to be something of an Old Maid. Traditional artificial insemination (AI) techniques failed dismally. Embryo transfer was then tried. Hormones were administered to encourage the shedding of multiple eggs, followed by AI. The embryos were then flushed from Lady’s uterus and implanted into recipient cows, but none survived.

Despite these setbacks, Lady did maintain that most critical of female charac­teristics: continuing a normal cycle of egg release. There was still hope.

Aware of the difficulties being experienced in getting Lady to conceive, and acutely conscious that time was running out, the RBCS obtained funding from the Lottery Grants Board to enable AgResearch at Ruakura to become involved. Located on the outskirts of Hamilton, AgResearch Ruakura possesses some of the best technical know-how in advanced bovine reproductive technology in the world.

Repeating procedures attempted earlier, Ruakura had the same disappointing results. About all that was left, short of cloning, was to attempt IVF, in vitro fertilisation. In this process, eggs are directly removed from an ovary. Despite the huge number of eggs some 100,000 present in a cow’s ovary, only 15 can be expected to be sufficiently

mature for harvesting at any one time, and harvesting can only be performed every three days. In keeping with the luck that had dogged the Enderby saga, no more than five mature eggs at a time could ever be harvested from Lady.

The IVF procedure involves eggs and sperm being mixed and left for 24 hours in special IVF media. Successful fertilisation is detected by division of the egg cell. A week later the tiny embryo, now beginning to form a foetus and placenta, is placed in an unrelated recipient cow which has had its breeding cycle synchronised with that of the subject.

Typically, for every 100 eggs harvested, 30 embryos are produced, 12 of which result in live calves from recipient cows. With Lady, 60 egg collections were made. Despite excellent fertilisation rates using Enderby Island sperm, only 18 embryos suitable for introduction into recipient cows were produced, since most of the embryos died at the four- or eight-cell stage.

Only two embryos developed successfully. One of these aborted at 40 days, and the other resulted in a healthy hull calf born in May of this year.

This bull calf, and hopefully future brothers and sisters, should ensure the survival of the Enderby breed. Any unique qualities inherent in the cattle beyond a certain perversity in breeding are as yet unknown, and it may be years before they are fully appreciated. But like Old Blue, the Chatham Islands black robin, Lady has probably saved her race.