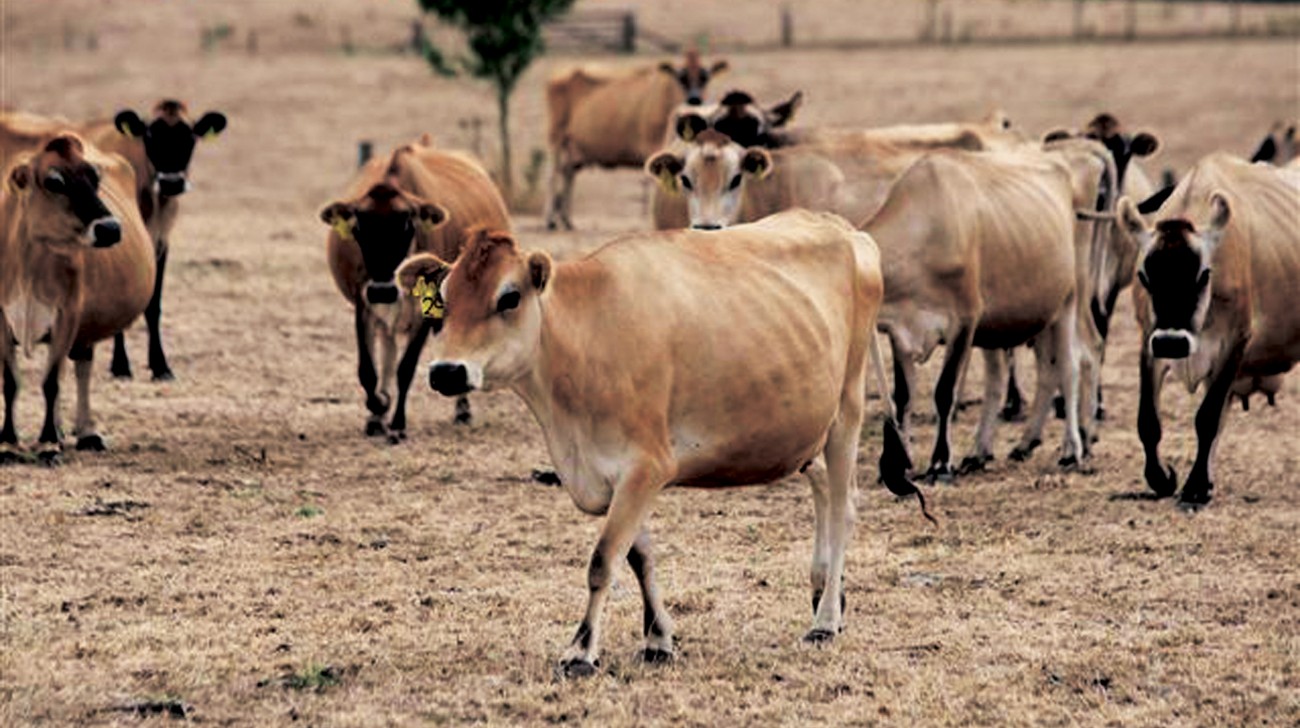 Only 4 mm of rain fell at Ruakura during Jan­uary, the lowest since records began in 1906 and only four per cent of its average rainfall. Coming after dry months in November and December, Waikato’s driest ever January has turned its iconic green pastures into a dusty brown landscape, more typical of a Canter­bury summer.

Rainfall was also well below average over most other North Island districts south of Waikato, as well as eastern areas of the South Island. As soil moisture plummeted, drought took hold in many farming areas.

It was a hot January as well. The aver­age temperature for the whole country was 18.3°C, which is 1.3°C above the long-term average. The persistent hot weather shows up in the average of daily maximum temperatures calculated by NIWA’s National Climate Cen­tre, which were more than 2°C above normal in many places and record highest in Puke­kohe, Ruakura, Nelson, Tekapo, Dunedin air­port, Clyde and Gore. In Central Otago, Alex­andra’s average daily maximum was 28.2°C, which is 4.5°C above normal, although only the second highest since records began.

The heat and dryness were to be expect­ed during a La Niña summer, although the number of records broken is probably a sign of global warming adding to the drama.

La Niña is one phase of a weather pattern known to climatologists as El Niño Southern Oscillation (ENSO), which affects the whole Pacific basin and beyond and is the major cli­mate pattern after the seasonal cycle.

During a La Niña summer, anticyclones are more frequent over southern New Zealand, bringing dry weather there, while outbreaks of warm northeast winds bring rain to areas in the north and east of the North Island, such as Gisborne, Coromandel and Northland.

The easterly trade winds across the tropical Pacific are also strengthened and the tempera­ture of the sea surface near the equator lowers by several degrees. There is both cause and effect here, because the trade winds are made stronger by the larger temperature difference between the Pacific Ocean and the waters around Indonesia and northern Australia, while the stronger trade winds cause surface waters in the Pacific to spread away from tropical latitudes to be replaced by colder water welling up from below.

ENSO is an example of a system linking the atmosphere and the ocean through a feedback mechanism. It oscillates between El Niño and La Niña and back again in an ir­regular cycle usually taking between three to five years. The stronger trade winds occur­ring during La Niña increase the low-level air converging over the western end of the Pacific, which in turn strengthens the up­ward motion of the air, leading to more con­densation and heavier rain. The condensing water vapour releases enormous amounts of heat into the air, increasing the upward motion, leading to further condensation and rain, and so on in another feedback cycle.

This means much heavier monsoon rains over the western end of the Pacific; repeated flooding and landslides have occurred in Indonesia over the last few months, caus­ing dozens of deaths. In Australia, the rain is welcome as it is breaking the worst drought in over a hundred years, although there has also been significant flood damage.

The heaviest rains, so far, have been in Queensland and down the east coast but only small amounts of rain have penetrated the major agricultural area of the Murray Dar­ling river basin. However, the signs of change are encouraging, and rain has also fallen over Western Australia after a long dry spell there.

Over the Pacific, La Niña causes the main rain band, known as the South Pacific Con­vergence Zone, to shift westward. Tonga, for example, had almost a month’s rain in six hours on the afternoon of 12 February.

Towards South America, La Niña typically brings drought to the Galapagos Islands, caus­ing a major die off of plants and animals.

Although New Zealand is warmer than average during La Niña, the global average temperature goes down as many parts of the world suffer colder conditions than normal. In North America, for example, La Niña is associated with colder than average weather from Alaska, across western Canada and down over the Great Plains. Where the cold air meets warm humid air moving north from the Gulf of Mexico conditions are favourable for rare winter tornados.

Some of these tornados occur during the night when they are harder to spot and their victims are sleeping and unable to respond to warnings. A particularly deadly outbreak occurred in February, killing over 50 peo­ple in the states of Arkansas, Tennessee, Kentucky and Alabama. Arkansas was one of the states holding primaries that day for November’s presidential election and some polling booths had to close as the tornados approached. Ironically, Clinton, one of the towns struck by tornados, had the same name as one of the main candidates.

La Niña, combined with global warming, has also taken the blame for the drought af­fecting the American southwest where Lake Powell, on the Colorado River, has fallen below 50 per cent capacity. As this drought intensifies, interest is growing in the story of past climate as revealed by tree ring studies.

Thick growth rings show the 20th century to have been the wettest in the last thousand years, while, disturbingly, periods of pro­longed drought are showing up. During the driest decade in the 13th century, the flow of the Colorado River appears to have been much less than the total amount of water cur­rently removed to supply the farms and cities of the 30 million people living in the region.

Parts of the world where La Niña is linked to cold weather include Western Europe and Asia from India through to Japan, where unu­sually heavy snow has fallen. Other areas prone to heavy rain during La Niña include southeast Africa, where the Zambezi caused major flooding in Mozambique this summer.

When will it end? Once established, both El Niño and La Niña tend to persist through the southern hemisphere summer into au­tumn then break down around April or May. Odds are we will see a change then, although global warming will still be with us.