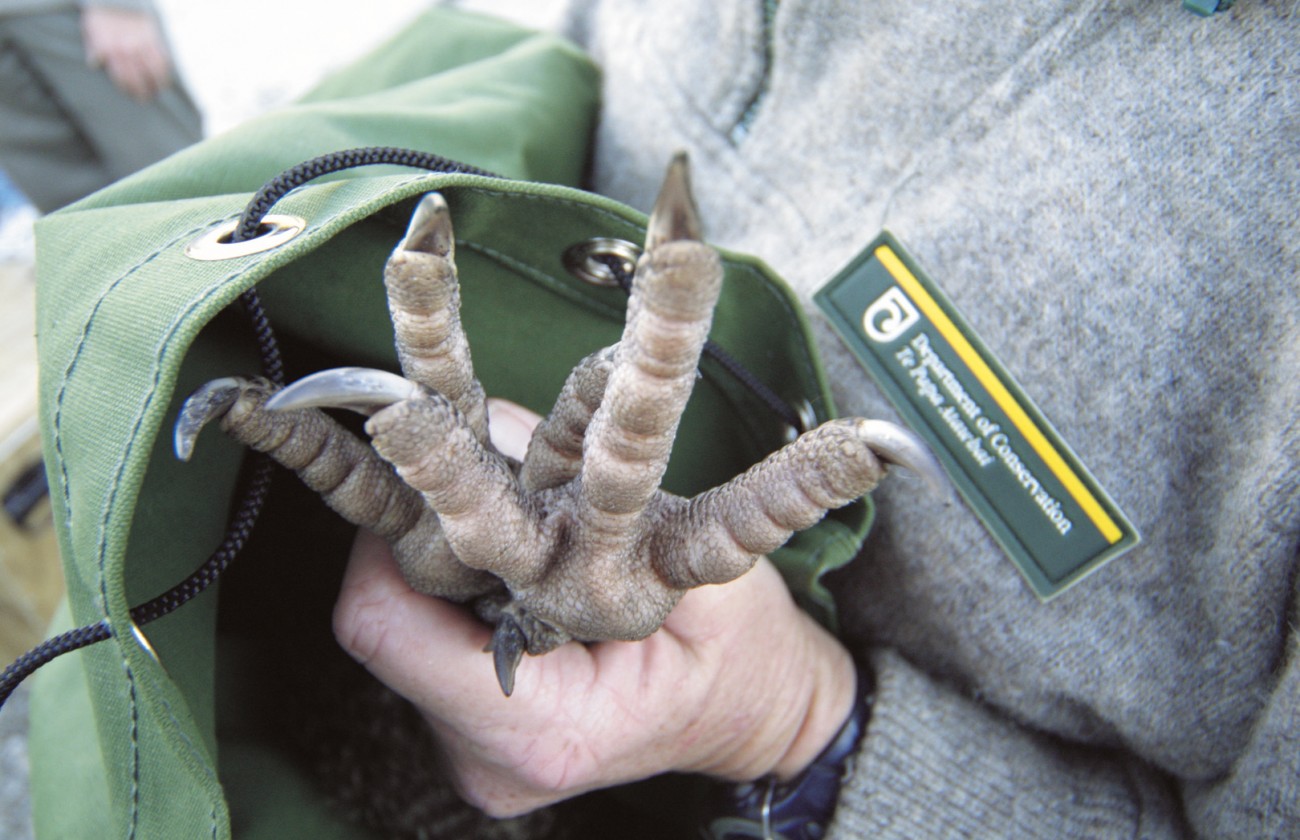 Both birds were members of a group of nine adult great spotted kiwi (Apteryx haastii) that had been transferred from north-west Nelson over the preceding week. The trans­fer was part of the Kiwi Recovery Programme—a co-operative enter­prise of the Department of Conservation, Forest and Bird and the Bank of New Zealand—which aims to increase the number of places where kiwi live. The return of kiwi to Lake Rotoiti also marked a milestone for the Rotoiti Nature Recovery Project, an intensive pest-control and ecosys­tem-restoration project managed by DoC. Great spotted kiwi is the first species to have been reintroduced to the nature-recovery area from a list that also includes mohua (yellow-head), saddleback and red-crowned parakeet.

The transfer began near Cork­screw Creek, which drains an upland area of tussock land and bush thick­ets in the rarely visited north-east­ern corner of the Gouland Downs, Kahurangi National Park, several kilometres west of the Heaphy Track and north of the Saxon kiwi-study area. It was identified as a suitable source because great spotted kiwi are abundant there, and the sur­rounding open tussock flats and ridg­es are ideal terrain for catching kiwi. Most importantly, however, long­term monitoring of kiwi in the Saxon study area has shown the popula­tion on the Gouland Downs to be relatively robust, indicating it could sustain the removal of five pairs.

On May 13, 2004, expert kiwi-catchers hailing from as far afield as Northland and Haast met at Cork­screw Creek to begin the first wild­to-wild transfer of great spotted kiwi to be attempted in modern times. The only other such attempt, in 1915, which entailed moving seven pairs from the Gouland Downs to Little Barrier Island, occurred long before radio transmitters were avail­able for monitoring the fate of the transferred birds, which, for reasons unknown, failed to establish them­selves in their new environment.

Our transfer was experimental. In particular, we didn’t know whether the birds would disperse from the release area. By using radio transmit­ters to follow their movements we expected to learn much that would be useful for establishing other new populations.

Although the Gouland Downs are notorious for inclement weather—a factor that probably favours the local kiwi population by depressing predator abundance—we experienced a series of unusually calm and clear nights, ideal for kiwi-catching. One pair was caught on the first night, then another pair, plus two single adults—one male, the other fe­male—were caught on the following night. The next day the six captive birds were transported to Lake Rotoi­ti by helicopter in two consignments. Representatives of the Golden Bay iwi group Manawhenua ki Mohua travelled with them. Following a wel­coming ceremony held beside the lake, the kiwi were placed in holding burrows within the nature-recovery area. Later that night the burrow covers were lifted and the birds were free to leave. Meanwhile, the Corkscrew Creek team continued to catch, health-screen, band and radio-tag kiwi, until, by the morning of May 19, a total of five males and five females had been transferred.

Sadly, one of the first three fe­males to be moved had suffered a serious injury inside her plywood transfer box. Her bill had apparently become jammed just as the lid was closed, resulting in the loss of the upper tip. She was transferred to the Institute of Veterinary, Animal and Biomedical Sciences at Massey Uni­versity, where she was cared for with financial assistance from the Shell Wildlife Fund. Following an appar­ent improvement in bill condition and feeding ability, the female was released at Lake Rotoiti for 10 days in May 2005 but failed to maintain weight so was returned to captivity.

In mid-August 2004 one of the males was repeatedly plotted in one location, suggesting he was incubat­ing an egg. Great spotted kiwi are notoriously difficult to monitor on the nest without disturbing them and possibly causing them to abandon it. We monitored the apparent nesting attempt with as little interference as possible, using radio-telemetry to plot the bird’s location from a dis­tance. It turned out to be pre-breed­ing behaviour, but in November the same bird settled down to incubate in earnest, and by mid-February we were able to confirm that he had suc­cessfully hatched an egg: the first kiwi egg to hatch at Lake Rotoiti in living memory. Unfortunately, the chick left the nest burrow before we were able to intercept and radio-tag it.

One year after the transfer, two of the kiwi in the nature-recovery area have shed their radio transmitters, but project staff are confident both birds are alive and can be retagged. Each of the other seven kiwi was recaptured, retagged and weighed in May 2005. Only one female had lost weight (170 g) during her first year in her new home, and her body con­dition was classified as very good. Another female weighed the same as when transferred, while another had increased in weight by 80 g. All four males had gained weight over the year, an average increase of 261 g.

One year after the transfer it appears that the wild-to-wild method has potential for establishing new populations of great spotted kiwi, and these birds seem likely to become a permanent feature of Nelson Lakes National Park.