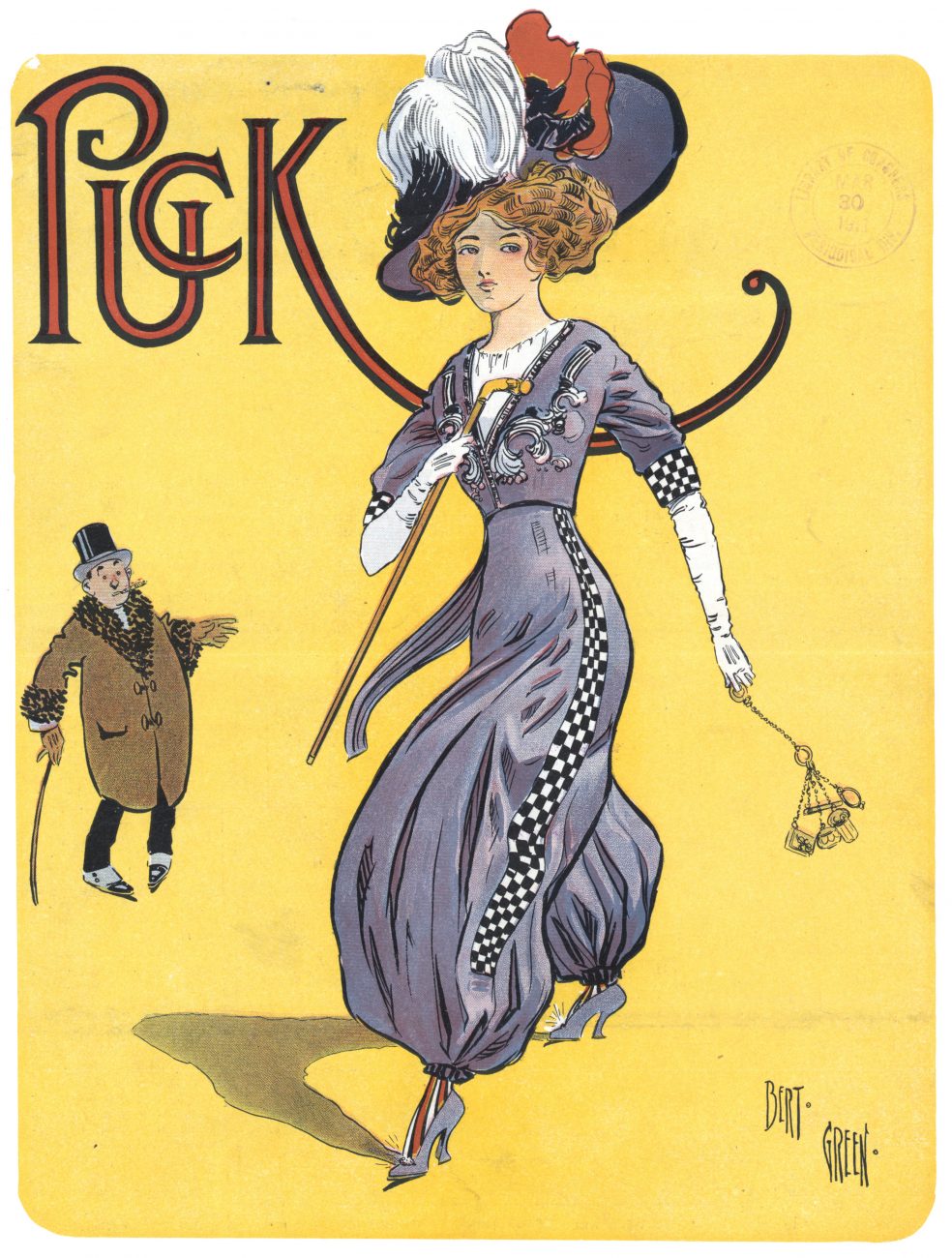 On April 19, 1911, the electric telegraph brought news of a bizarre fatality in the Australian city of Bendigo. An elderly man had been knocked to the ground and crushed by a large crowd following a woman wearing a “harem skirt”.

This latest fashion, thought up by Paris couturier Paul Poiret to allow the stylish woman to exhibit “the harmony of her form and all the freedom of her native suppleness”, had made a similar splash in New Zealand just three weeks earlier. When Wellington’s DIC department store announced that the outfit could be seen on a living model in its windows at 3pm, a crowd of some 3000 turned up to await the drawing of the curtains. Such was the excited press of people straining to see the veiled model that the window glass shook; it shook more when she sat and made a show of reading a gilt-edged copy of the Koran. Eventually, Sergeant Kelly and his constables were obliged to shut down proceedings, and a card advising ‘Show postponed’ was placed in the store window.

At the Feilding races, an adventurous young woman kitted out in a harem skirt was followed about the enclosure by an enthusiastic crowd of several hundred people. The effect was filmed at the instigation of the stunt’s organiser, a local picture show proprietor. Indeed, the ‘skirt’—in fact, baggy pants gathered in at the ankle—proved a ready draw. Oamaru’s Opera House attracted a record audience the same month when ‘The Girl in the Harem Skirt’ appeared onstage to enliven a Universal Picture Company programme that included Views of the Norwegian Town of Trondheim and Curious Caterpillars.

A harem skirt designed by Wellington drapers George and Kersley featured in a new one-act sketch, My Costumier’s Bill, while the entertainer Belle Crome—who was equally at home singing, playing the violin, or ringing bells—wore a “costly and dainty” skirt imported from Wirth’s of Paris in a show at the Greymouth town hall.

The Marlborough Express took exception to local hoteliers who brazenly drummed up business by dressing their barmaids in “trouserettes” and hinted that, at a time of growing prohibitionist sentiment, they should weigh the likely reaction at the ballot box.

But it was left to the Old World to express true outrage at the latest swerve of fashion. At the Budapest Opera House, the sight of two society ladies wearing harem skirts caused an uproar. When the women attempted to hide behind a pillar, they were forcibly held in full view by other women and pandemonium ruled until the manager appeared promising ticket refunds. And at a Comédie Française dress rehearsal in Paris, the audience took such exception to the sight of a cigar-smoking actress strutting about on stage in emerald-green pantaloons that the costume was abandoned before opening night.

Even Pope Pius X weighed in, condemning the harem skirt as a “daring attempt towards the triumph of female emancipation” and banning it from Catholic churches.

Perhaps it is not surprising that, as a bastion of women’s suffrage, New Zealand took a more tolerant, even pragmatic, line. As the Greymouth Evening Star reviewer said of the harem skirt worn by the indefatigable Belle Crome: “Judging by the way Miss Crome was able to move around, it is a form of dress that should be popular with ladies who wish to go a long way in a little time.”