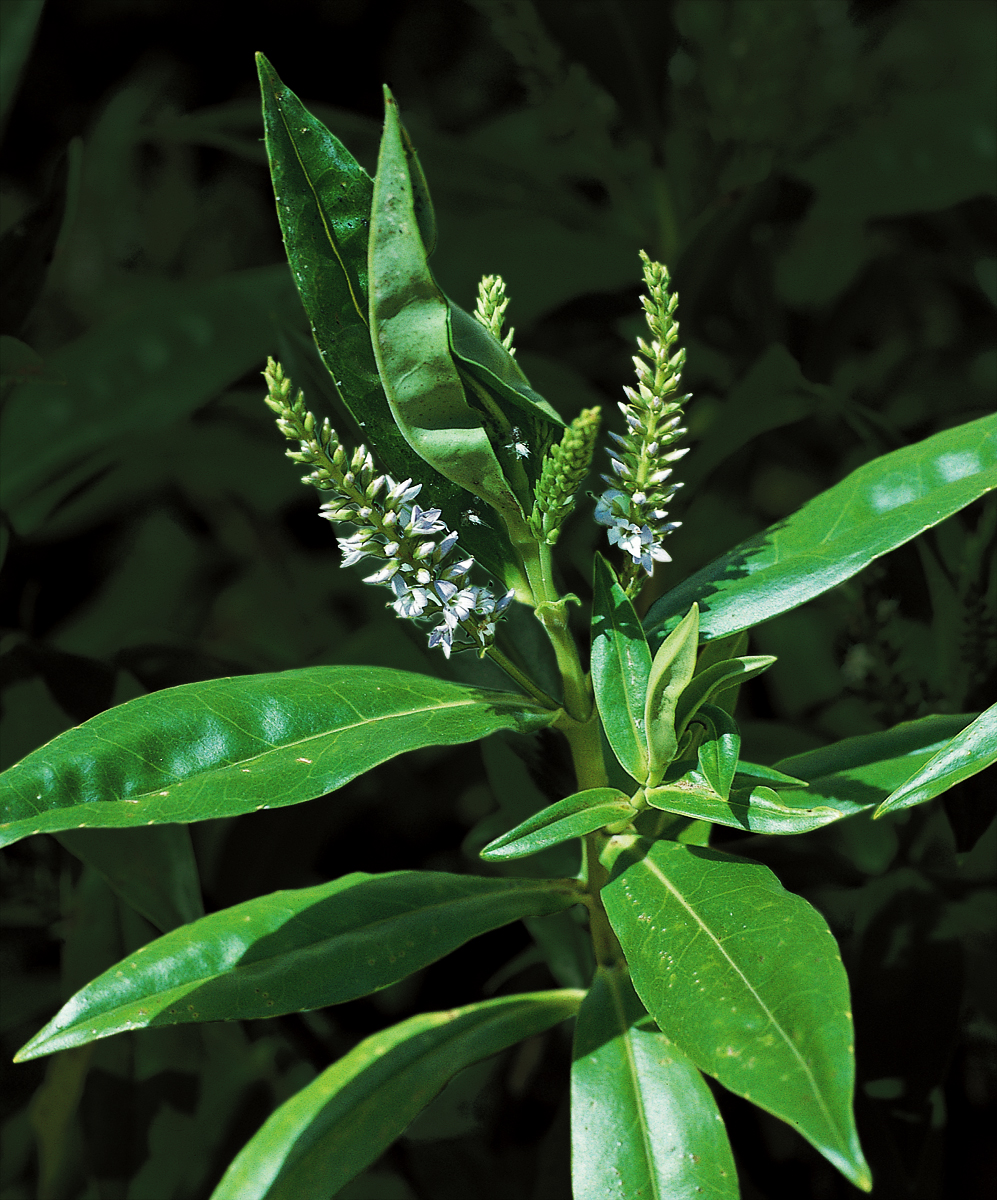 While Concerns For New Zealand’s many endangered native animals are frequently voiced, threatened flora receives somewhat less notice. Yet many of our plants are in equally dire straits. No fewer than 319 species-14 per cent of our flora are considered endangered, and a further 142 species are of very restricted occurrence.

However, the prospects for a species with one of the most precarious of toeholds on existence, the Kermadec koromiko (Hebe brevi­racemosa), are brightening.

Originally described in 1910 from the cliffs above Denham Bay on Raoul Island by the New Zealand naturalist Reginald Oliver, the Kermadec koromiko was even then in serious trouble. Oliver wrote that it was already becoming uncom­mon, on account of the fact that it “has been almost killed out by goats,” and that it was “now only found in cliffs and other places inaccessible to these ani­mals.” Sixty-nine years later, following several field surveys, Christchurch botanist Bill Sykes reported that it was “now probably extinct,” and it was listed thus in David Given’s 1981 book Rare and Endangered Plants of New Zealand.

Owing to concerns over the demise of the Kermadec koromiko and other endemic plants, goats were among the first introduced animals on the island to be targeted for control. Systematic hunting commenced in 1971, and 13 years later goats were finally eradicated from Raoul Island.

Even in the early stages of the goat control programme there was an almost immedi­ate improvement in the flora of the island. However, no Kermadec koromiko plants were seen, and its extinct status seemed confirmed until, in 1983, goat hunter Ray Scrimgeour, while tracking a lone goat across a bluff system, stumbled upon a single specimen of the plant. Until 1997, this solitary plant was the only known example of the species in the wild, and the source of all material held in cultivation in New Zealand.

Since 1983, attempts have been made to germinate seed from the wild plant and to plant out cuttings. Although seeds germinated readily, few if any seedlings survived, although some cutting-grown material succeeded in the wild.

Back in New Zealand, the future of Kermadec koromiko has remained far from assured. The species is not especially attractive, so only a few specimens are held by botanic gardens, universities and specialist growers. Furthermore, the long-term conservation value of many of these specimens was thrown into doubt when in 1995 evidence of sponta­neous hybridism between Kermadec koromiko and other Hebe cultivars was discovered. This find means that unless strict measures are adopted to prevent further hybridism, ex situ stocks of the Kermadec koromiko may eventually become polluted with the genes of other Hebe species.

Faced with these prob­lems, the Department of Conservation considered a more thorough survey of Raoul Island. It seemed probable that additional plants must exist, for Hebe seed is typically only viable for 6-18 months, so it was unlikely that the only known wild plant had germinated from seed deposited 75 years earlier.

Good surveys usually require specific information about the target species’ lifestyle. However, knowl­edge of the ecology of the Kermadec koromiko was very limited. The first information on the species was written 74 years after goats had become estab­lished on Raoul, so the cliff habitat Oliver observed may have been a refuge rather than a preferred habitat. Observations on cultivated plants showed that they grew and flowered better in dappled light, rather than full sun or heavy shade. This suggested plants might be found under taller, but not too dense, vegetation.

Armed with this sketchy information, it was left to Department of Conservation staff to identify suitable sites on the island. Past surveys had covered most accessible places on Raoul, and some areas of cliff. However, because of their height (400­600 metres), unstable nature and sporadic covering of Kermadec pohutukawa, most cliffs could not be scaled safely, nor could staff iden­tify what plants grew there.

In 1997, plans were made to co-ordinate the depart­ment’s weed survey and eradication programme with searches for the Kermadec koromiko. Pockets of the aggressive Mysore thorn and Brazilian buttercup remained on the clifftops and threat­ened to re-infest the island unless controlled. Volunteer staff with abseiling and single-rope climbing skills were brought to the island, and as a result of their dedication and bravery, a small seedling Kermadec koromiko was discovered on the Denham Bay cliffs in December 1997. This discovery provided the necessary impetus for further cliff work, and by early 1998 the same staff discovered a further 50 plants.

While these recent discoveries have helped reduce some of the urgency to manage the species, the Kermadec koromiko is still far from being off the endangered list.

Botanists still lack a full picture of the species’ natural abundance, and while seedlings have been observed on the cliffs, natural recruit­ment from the original 1983 plant, which grew above the cliffs, was never observed. Rats, which are widespread on Raoul and have a major impact on the island’s flora and fauna, may be eating koromiko seedlings.

Although plans to eradicate rats are well under way, control is unlikely to start until sometime after the year 2000.

In the meantime, weed control measures are being increased prior to rodent control, as it is likely that rats also suppress the spread of weeds, and so their removal may result in even more serious weed problems.

Despite these difficulties, it is now fair to say that the future of this species is looking better than ever. Aside from the 52 wild plants now known, there are15 cutting-grown plants established in the wild, and between 25 and 30 seedlings currently held in the island’s nursery are destined to be planted during the winter of 1999.