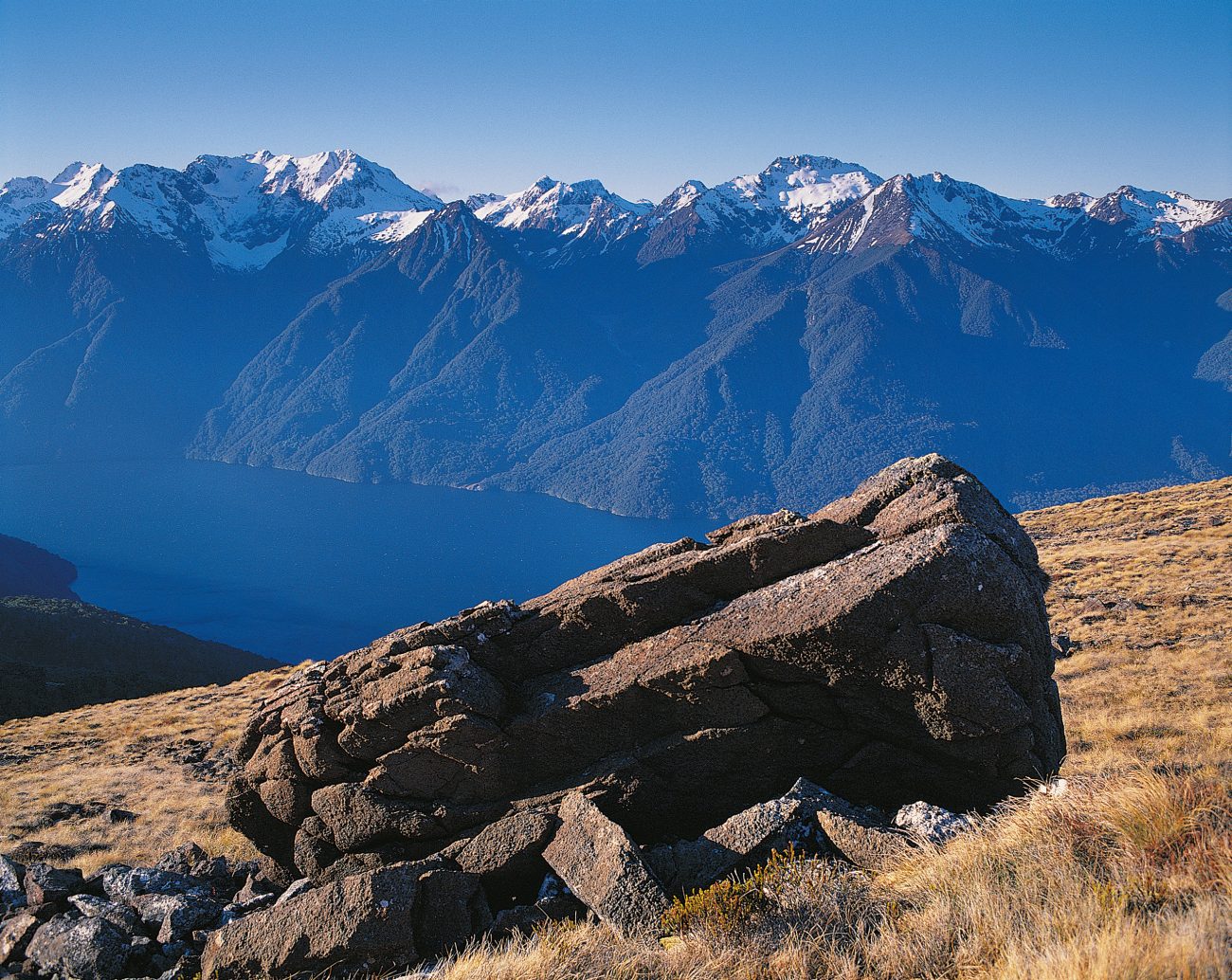 Of all the Great Walks, the Kepler is the only one that was deemed ‘a classic’ from the moment it was conceived. Opened in 1988, it came about when the Department of Conservation joined several infrequently used routes on the Kepler Mountains to make a well-constructed track, with the aim of easing the number of walkers crowding onto the Milford and Routeburn tracks. That it failed in this intention and instead offered another high-standard multi-day track to walk in this wonderful part of New Zealand was entirely predictable. But its popularity seems to prove that a track doesn’t have to be an ancient Māori greenstone trail or a place of colonial history, or even feel the decades-old reverberations of explorers, hunters, trampers and their ilk to have poignancy in a world overwhelmed by humans.

The well-conceived Kepler Track cuts a daring line across some spectacular Fiordland tops and links many disparate natural features—caverns of limestone, meadows of alpine plants, forests of lowland beech and two lakes of monumental size. Furthermore, it neatly returns to its start at Te Anau like a giant ouroboros (the serpent of creation that swallowed its own tail), having led you across a wild edge of Fiordland. It takes between three and four days to walk its 60 kilometres, and can be done clockwise or anticlockwise.

From Te Anau to Brod Bay, the Kepler starts out gently enough through a forest of red beech and mountain beech on the edge of Lake Te Anau, the largest lake in the South Island. Whether you wander in silence or converse with a companion, these first kilometres help to clear the mind of the recent hectic past and other unnecessary thoughts. The harder work begins with the climb up the east-facing hill from Brod Bay to the bushline through an entrancing forest covered in lichens.

From Luxmore Hut, the next day’s tramping is spent almost entirely above the bushline, winding around easily travelled mountain faces and ridges. The track zigzags a few times, then climbs gradually before commencing a long sidle under the northern faces of Mt Luxmore. The rocks around Mt Luxmore sparkle with crystals and mica, their grainy, gritty texture splashed in strong dark reds and blue–greys. Indeed the Kepler Track, of all the walks described in this book, has the most interest for those with a geological bent. Here it’s possible to point to the ground and roll your tongue knowingly around such expressive words as gabbro, dunite, pegmatite, diorite and gneiss.

This second day, no matter what the weather, will etch long-lasting images into your memory.

When glancing down to place your feet you will see rocks and alpine tussocks, flowering herbs and mountain grasshoppers; when you look out you will see huge Fiordland vistas, and may even experience an almost vertiginous feeling of spaciousness.

By making an early start the following day you can walk all the way to Rainbow Reach carpark (allow seven to eight hours), or to the Te Anau outlet in 10–11 hours. But most prefer the five- or six-hour stroll down the Iris Burn to spend a third night at Moturau Hut on the shores of Lake Manapōuri.

Beyond Moturau Hut, a boardwalk stretches out above a superb kettle bog, a soggy mire where tiny purple bladderworts, deep blue swamp orchids and diminutive sundews waver amongst rustling wires of rush and green sphagnum moss. After several swamps are traversed, the trail reaches the Waiau River where, at the Rainbow Reach bridge, you can catch (in summer) a shuttle bus to Te Anau. Otherwise the track continues for a further three hours of forest and riverside walk to complete the circle back at the Lake Te Anau outlet.

The Kepler Track is constructed to a high standard and has three huts with bunks, mattresses and running water. Heating, gas cooking facilities and flush toilets are supplied between late October and April.