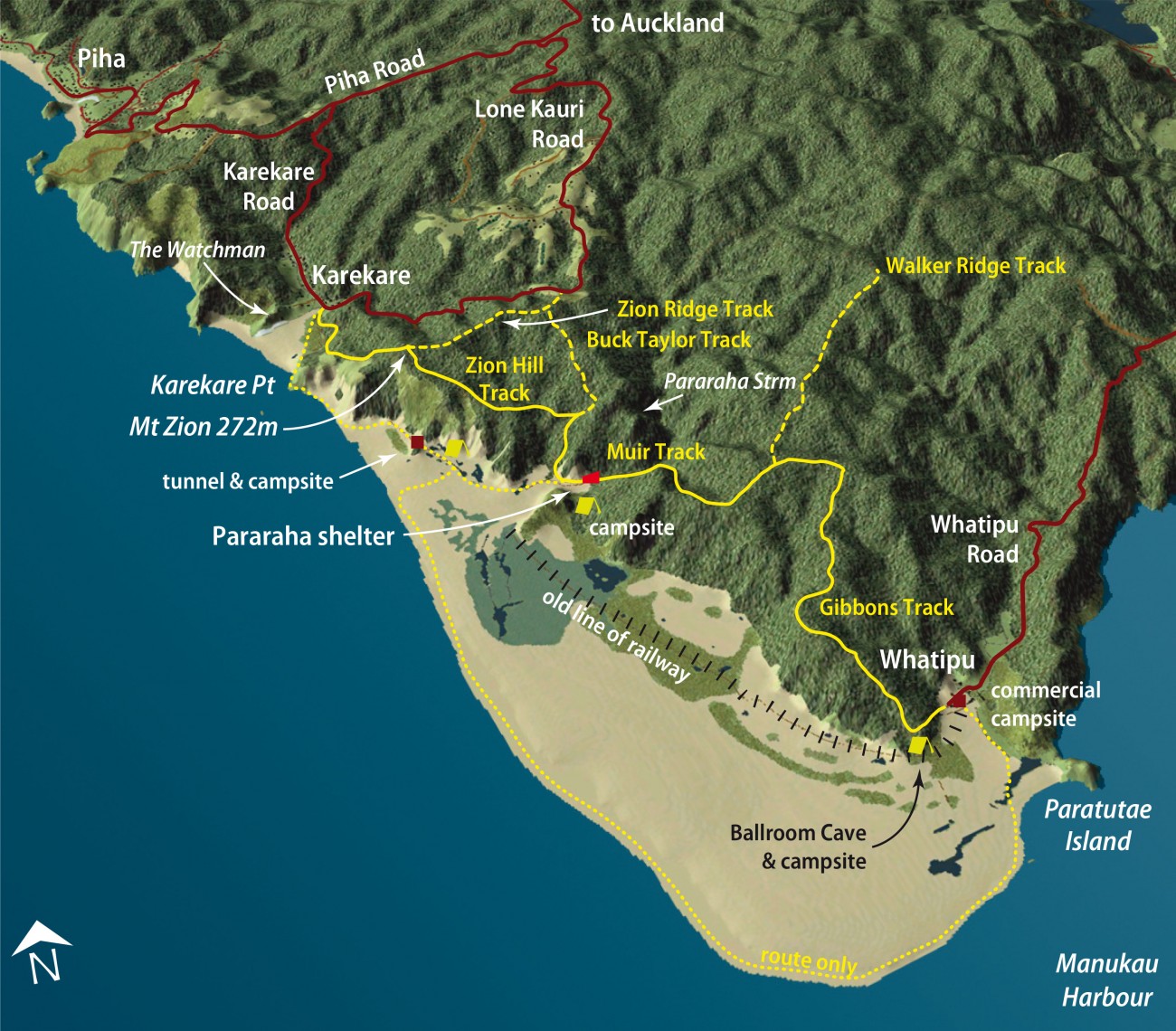 This coastal walk is arguably one of the best overnight tramps in the Waitakere Ranges, the densely forested hills on Auckland’s northwestern flank. It’s a tramp through subtropical forest to a pleasant campsite beside the gorged Pararaha Stream, beyond to the ironsand and bold headlands of Whatipu, and then a coastal stroll back to Karekare. Although the trip can be completed quite comfortably in a longish day, many will want to take a tent and spread it out over a more leisurely weekend.

From the carpark at Karekare, take the Pohutukawa Glade Walk to a picnic area. Here, a signpost indicates the start of the Zion Hill Track, which follows the route of an old Maori trail to Pararaha. A steady climb leads to a forested spur, with some good views back over Karekare Beach and to the distinctive shape of The Watchman—a headland invariably rendered hazy by sea spray. After about 20–25 minutes, you’ll reach Mt Zion (272 m) and the junction where the Zion Ridge Track branches off. Stay on the Zion Hill Track. After traversing an undulating ridge and crossing a small stream, you enter a kauri grove with some sizeable trees.

The track, now increasingly rutted and muddy, crosses a second stream to join the Buck Taylor Track. Head right here, where the track drops down to a coastal wetland in the Pararaha Valley. A signpost at a track junction in the valley indicates the way to a campsite upstream. The walk from the junction to the sheltered campsite takes about 20 minutes. The valley is lined with nikau palms, mahoe and cabbage trees.

From the camp, the Muir Track climbs steadily onto a ridge, where it joins the Gibbons Track. From its highest point, the track descends for some distance, finally emerging at Whatipu Stream, where there is a footbridge.

As a side trip, it’s possible to follow a rough unmarked route that heads northwards before you cross the footbridge. This leads to some sea caves that were once used as shelter by Maori and, later, as a ballroom for timber workers in the 1920s. There’s another campsite here, with a toilet. Back at the footbridge over the Whatipu Stream, head towards the beach, where you will get a good vista of the wild coastline at the northern entrance of Manukau Harbour. Cutter Rock pokes up defiantly, with the impressive Paratutae Island and Ninepin Rock nearby.

From Whatipu, you begin a coastal walk back to Karekare over the black sands so characteristic of Auckland’s western coastline. Walking in a wild coastal environment is something of a rarity in the North Island, and this is a shoreline to savour—pounding waves, a haze of sea spray and the ever-present, brooding, forested cliffs of the Waitakere Ranges. Past Pararaha Point, head inland towards Tunnel Point through some large sand dunes to join the trail leading towards Kare-kare. At Tunnel Point there’s another campsite overhung by large pohutukawa, making it a very nice lunch spot.

After walking through the tunnel you emerge on the beach again at Cowan Bay, where the spectacular cliffs of Cowan Point meet the Tasman Sea. Paratahi Island lies just off the coast and there are some interesting rock pools along the shore. Once you round Karekare Point, The Watchman comes into view again, and then it’s simply a short stroll inland to the carpark.