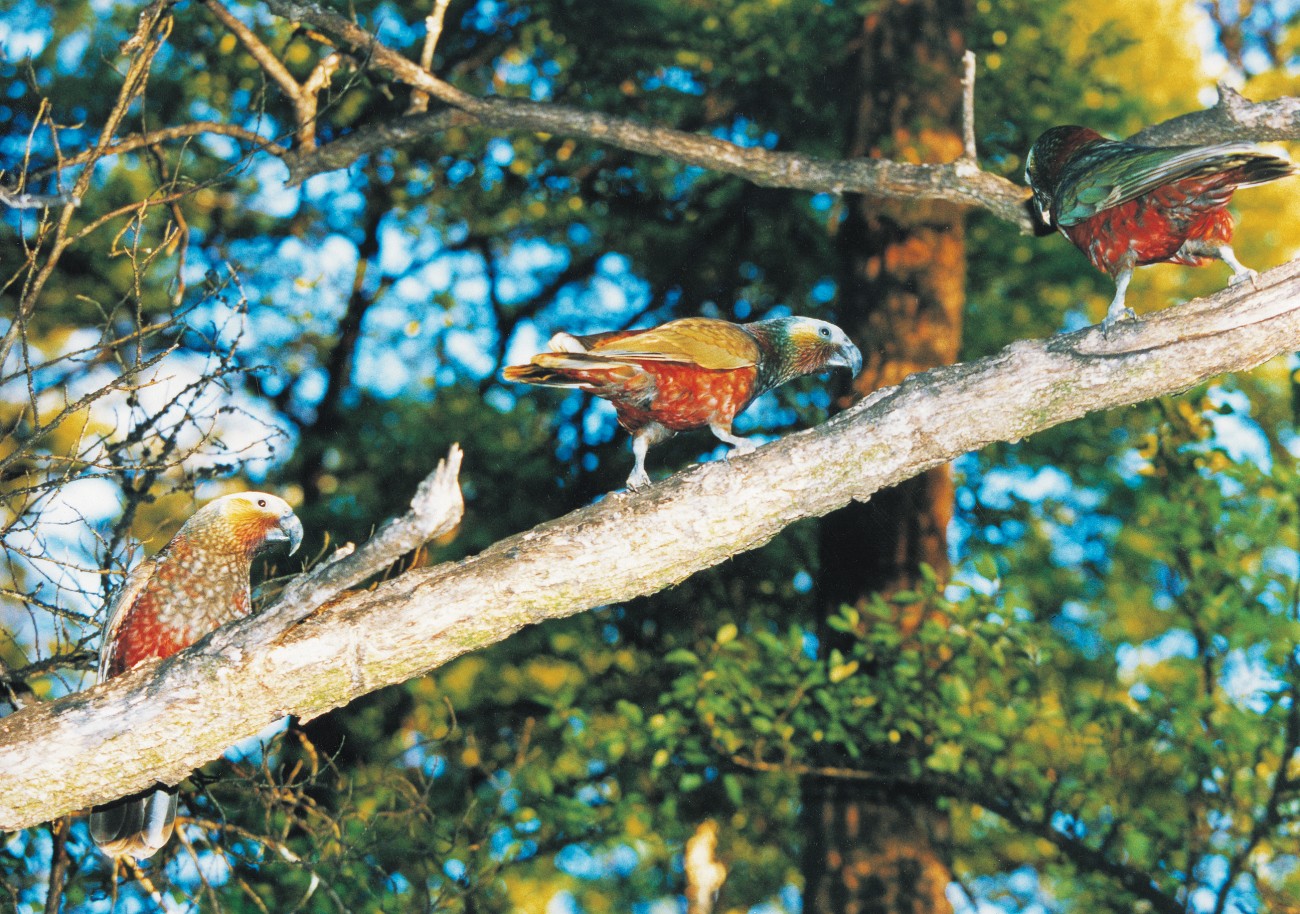 In a picturesque valley between the Livingstone and Earl Mountains in Fiordland National Park, conservation staff have won a significant battle in the war against introduced predators.

The 40 km long Eglinton Valley now has a healthy and growing population of South Island kaka, the noisy and once prolific native parrot of the deep forest.

In the Eglinton, heavily forested hills flank the tussock-covered valley floor on both sides. These hills once rang with the squeals and chatter from huge flocks of kaka, but the introduction of stoats in the 1800s to combat a rabbit problem brought disaster for kaka, as it did for many other native species.

Young kaka are particu­larly vulnerable to stoat predation. The chicks spend about three months in nests in hollow trees, where they have little defence against nimble stoats. Fledglings which manage to survive this dangerous period spend their first week out of the nest on the ground, calling loudly to be fed and presenting a ridiculously easy target for a predator.

At the time of European arrival in New Zealand, kaka were among the most numerous of forest birds, outnumbering pigeons in the diet of some Maori tribes. They massed in huge flocks from sea level to the treeline, from North Cape to Bluff, in forests which covered most of the country, apart from Canterbury and parts of the South Island east coast.

No estimate of their total number exists, but a serving of 6000 kaka at a tribal gathering in Taranaki in 1880 was not an uncommon culinary indulgence. The birds seem to have been able to sustain that level of harvest for several hundred years. Today, with their greatly diminished forest habitat invaded by predators, there are probably fewer than 100,000 kaka, and the species’ future is uncertain.

It was first thought that the stoat problem was too massive to deal with—and, moreover, that the impact of stoats on total kaka numbers was not serious. However, research in recent years has proved just the opposite. In the Eglinton Valley, a low-cost stoat-control trial was set up during 1997, using traps baited with hen eggs, and the results were encouraging.

The 1999/2000 “stoat plague summer”(see story opposite page) was the first opportunity to test whether this level of control could successfully protect kaka during a particularly severe stoat summer.

Again, the results were heartening, and in the summer just past 15 pairs of kaka successfully reared 26 chicks, and only two females were killed on the nest by stoats. Given that 2000/2001 was also a “stoat plague summer,” this level of breeding success exceeded all expectations.

There is still a long way to go in the war for kaka against stoats, and Fiordland is a huge and forbidding battleground, but an encour­aging start has been made. Most encouraging is the relatively low cost of stoat protection compared to other forms of wild animal control.

The wooded hills of the Eglinton Valley are not exactly ringing with kaka calls, but they can be heard, and the sound is growing.