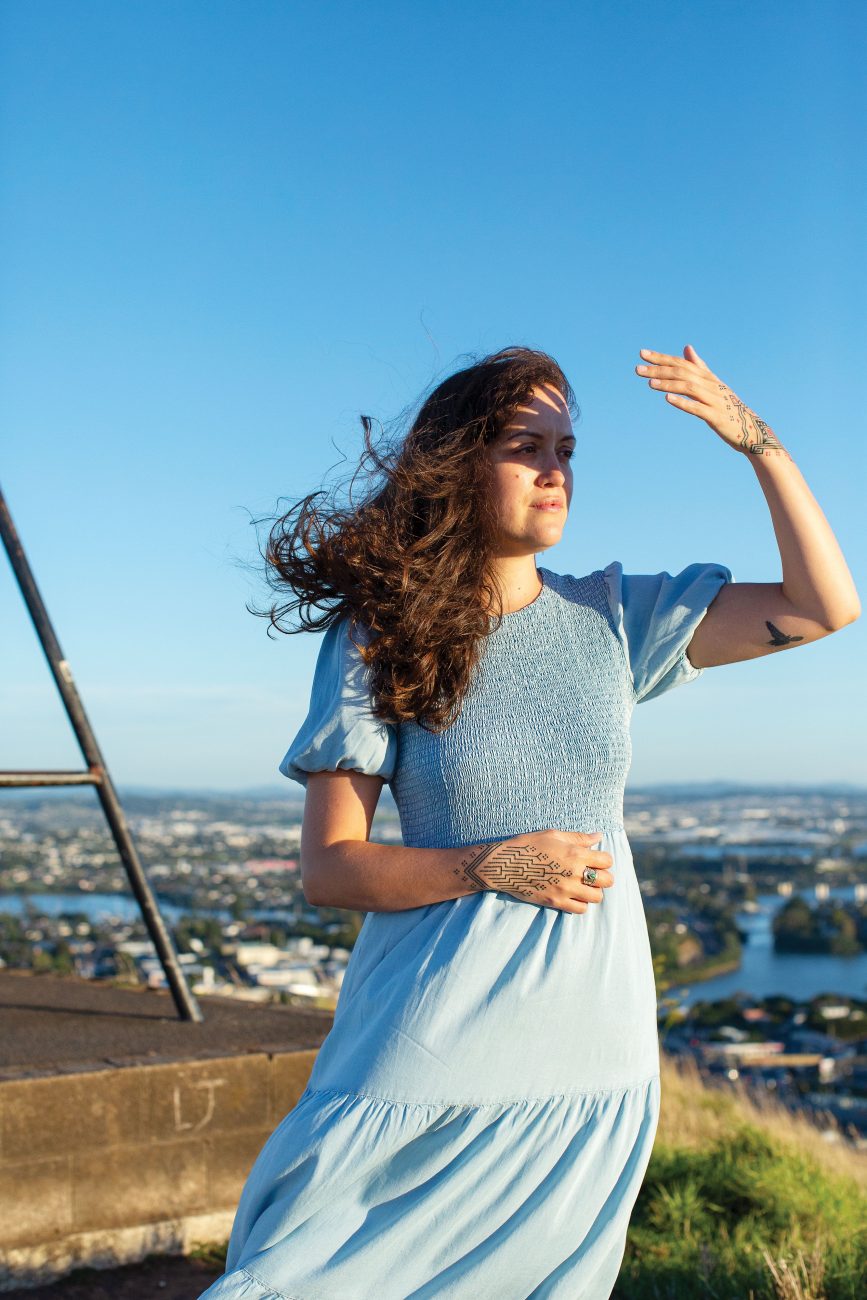 The vision came to Jade Kake (Ngāpuhi, Te Arawa, Whakatōhea) on Motu Matakohekohe, an island in Whangārei Harbour. Up top, it’s dusty and bare, but there, where her Te Parawhau ancestors had a major pā, there’s a sweeping view of the bays and inlets. Her gaze settled on whānau-owned ancestral land at Te Rewarewa, where her grandfather was born and raised.

“I was thinking about the kāinga that used to be [in the harbour], and those that are still there, and about what impact I—not alone, among others—might be able to have in my lifetime. I got excited about seeing those kāinga re-established… and the idea that we might be able to live together as whānau on our whenua again, and how different our lives might be as a result.”

Papakāinga, communal villages, were once the base unit of Māori society. They were collections of raupō or nīkau whare, inhabited by closely related whānau, and strategically located near sources of kai and other resources, and neighbouring hapū. Jade says they allowed people to thrive within “a continuous network of environmental stewardship [and] reciprocal relationships”.

The dismantling of this system happened fast after European settlement began, thanks to loss of land, the destruction of sources of kai, and planning laws. The 1842 Raupo Houses Ordinance banned raupō housing, citing fire risks, but effectively outlawing Māori settlements. Zoning rules had a similar effect. Mass urbanisation was the calculated result, damaging the collective decision-making processes that came from living together, and disconnecting people from their land.

Jade’s whānau hadn’t been able to live at Te Rewarewa since the early 1970s. She herself was born and raised in Australia, thanks to her beloved grandfather, Haki. When his mother died in childbirth, and he and his many siblings were sent to live with various relations, Haki took off. “He actually joined the circus, with Prince Tui Teka and a bunch of other boys, and they travelled the world.”

Haki’s life of adventure eventually saw him settle in Australia, where Jade’s mum was born, and then Jade. She grew up in northern New South Wales, on Bundjalung country, on an intentional community called Billen Cliffs—one her parents helped set up.

“That environment had a big impact on me. These people had come together and deliberately planned out where the sections and homes would be, the conservation areas, the shared facilities; and you knew everyone, you could rock around to anybody’s house. I could see people testing out ideas in real time, see the impact on their lives.”

Despite the distance, through Haki the idea of Te Rewarewa was never far away.

“I could see that desire in him and that yearning in him. He always talked about coming home, and I was like, ‘I’ll come with you’.”

The year Jade moved home for good, aged 23, the hapū gathered to camp at Te Rewarewa. “One of my cousins said, ‘This is Jade, she’s just moved back from Australia,’ and one of the kaumātua said, “You’re worth ten of those ones that are going in the other direction.”

Today, Jade is an architectural designer running her own award-winning practice, Matakohe Architecture and Urbanism, which supports whānau and hapū to develop their own land. But the projects closest to her heart are the creation of 21st-century papakāinga on her whenua tūturu at Pehiāweri, and Te Rewarewa.

It’s hard not to share Jade’s excitement when she talks about the master plan the whānau whānui has drawn up for the 64-hectare block at Te Rewarewa. First, a marae towards the harbour, and a campground, so whānau who don’t live there can easily spend time and reconnect. There will be 42 homes, arranged in hapū clusters, each designed for big multi-generational whānau, with communal facilities. The centre of the block will be given over to regenerating native bush. The back corner will be zoned light industrial, so whānau can live and work on site.

Getting a project like this off the ground is complex. You have to navigate whānau politics, work with regulations that weren’t designed with kāinga in mind, anticipate potential hostility from neighbours, and find ways to raise finance: banks won’t lend money against Māori land because it’s collectively owned. The project is almost at resource consent stage.

A big part of Jade’s work is enabling others to help take on this load. She’s teaching at Huri Te Ao School of Future Environments, AUT, passing on technical and cultural skills to both Māori and Pākehā architects and urban designers, spreading ideas through her Indigenous Urbanism podcast, and writing. She’s got two manuscripts signed to publishers, and has recently picked up major awards for her words.

Right now, Jade is letting her staff take the reins at her architectural practice so she can spend 2022 doing full immersion at Takiura. When she gives her mihi, after naming her iwi, hapū, marae and ancestral kāinga, she comes to herself with a delighted smile: “Ko au he tauira o te reo Māori ināianei.” I’m a student of te reo Māori now.