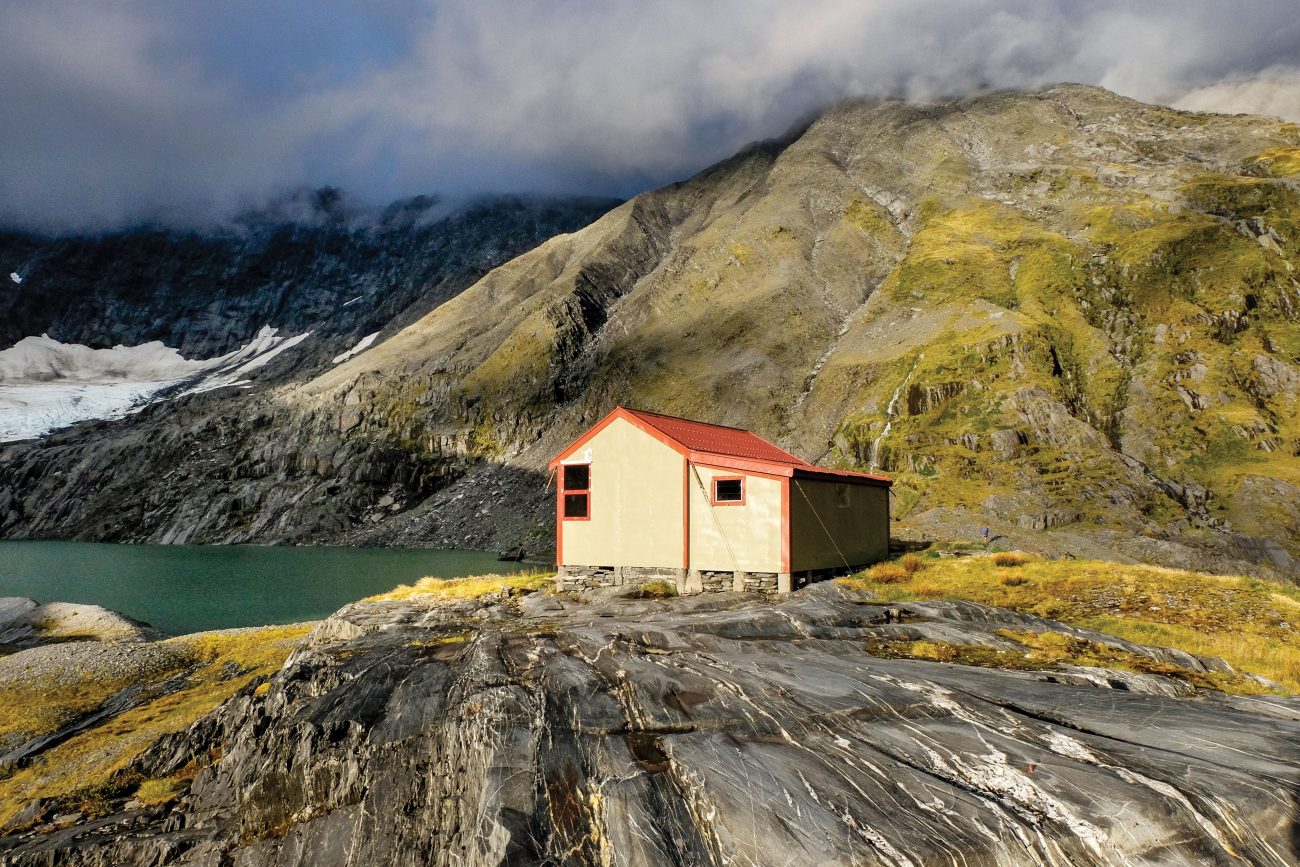 In 1970, the Ivory Glacier was considerably larger than it is today and flowed all the way down into the lake. These days, the remnant piece of ice that is left tells you all you need to know about whether global warming is real or not, but in the 1970s things were not so clear and significant scientific effort was being put into understanding the world’s climate.

New Zealand had been asked to contribute to an increasing number of international studies and the Ivory Glacier, which flowed off a small catchment on the Lange Range, was chosen by glaciologist Trevor Chinn for one such study, mainly because of its size.

The smaller the glacier in this temperate part of the world, the more sensitive it is to any changes in the climate. A number of other smaller glaciers were also considered, including the Brewster Glacier, but Ivory ultimately won through.

The six-bunk SF70 Ivory Lake Hut was built on a glacier-polished platform on the lip of the cirque facing the lake, arrestingly close to the edge of a sheer cliff. For the next decade, glaciologists lived and worked here at various times of the year to measure and record what was happening with the glacier. The SF70 was not really designed as an alpine hut and in many ways it is a testament to the design that Ivory Lake Hut has lasted as long as it has on this exposed site.

By the early 1980s, it was evident that Ivory Glacier was starting to shrink quite rapidly, and 20 years later it had retreated right out of the basin that now forms the lake. Today, all that remains of the glacier is a relatively small patch of ice on the side of the Lange Range.

The hut has long since been abandoned for scientific use, and despite some modest maintenance over the years it was in need of an overhaul by 2015.

While Ivory Lake Hut had fared surprisingly well in extreme conditions, there were a range of issues that needed to be remedied, so a number of committed volunteers associated with The Backcountry Trust and local kayaking group Waitaha Awa Kaitiaki set about fixing them over a few years.

In 2016, urgent repairs were carried out. A door had blown off and let water into the entry, so that was replaced. The lean-to that had been added to the hut had also suffered serious snow-loading damage.

In 2017, the roof was removed and insulation was added into the cavity. Insulation was also put in under the floor, both windows were replaced with double glazing and a perspex layer to protect them from stones, new ventilation was added, and a passage was created between the hut and shed. The hut was repainted using Dulux Weathershield in Colorsteel colours Pioneer Red and Desert Sand.

The restoration was completed in 2019, with the volunteers adding new linings, architraves and skirting, shelves, coat racks and even a perspex protector for the historic map on the wall. The shed was also repainted.