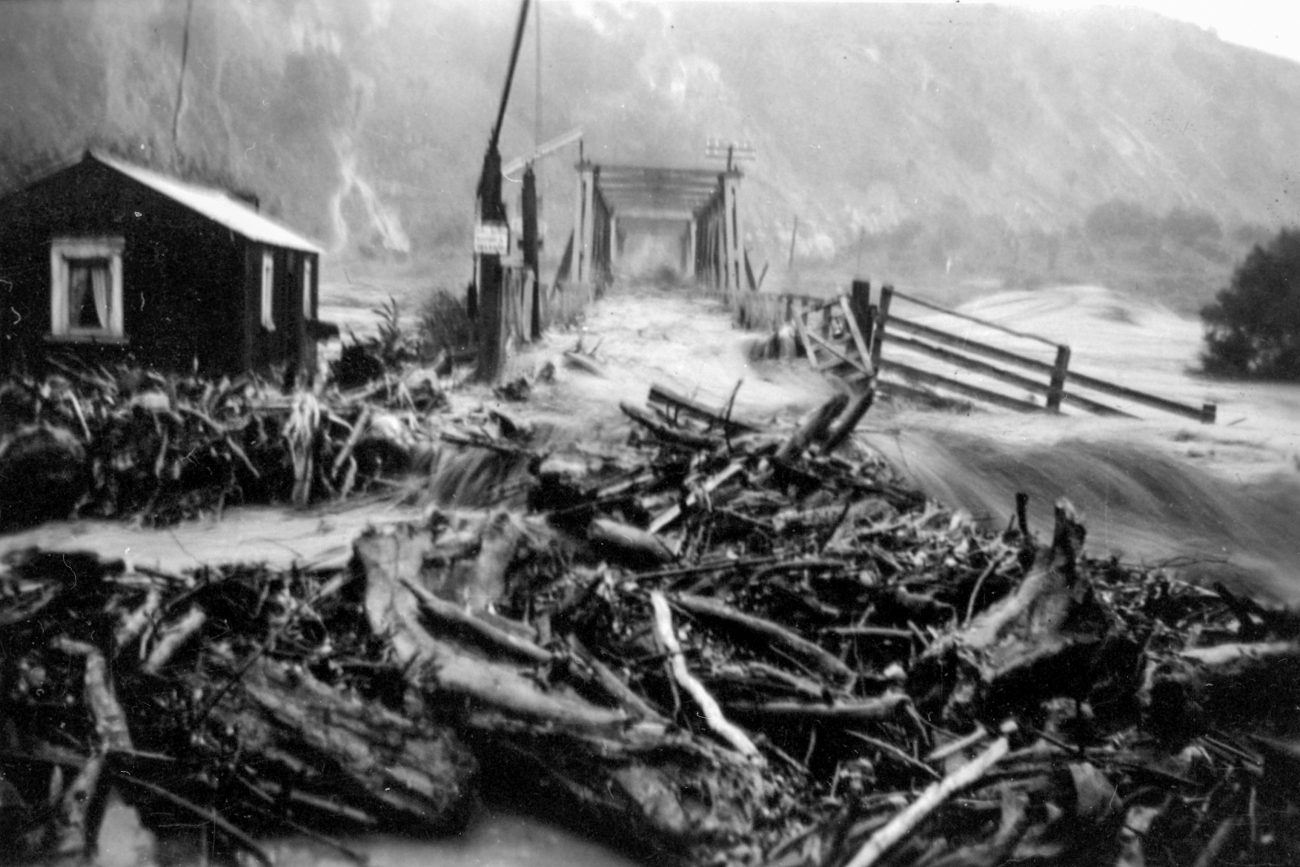 In early August, a metre of snow fell over the higher parts of the Napier-Taupō road and stayed for several days. The weight of snow on power lines brought down 200 power poles, cutting electricity to many homes. The cold southerly change brought more snow to Hawke’s Bay than areas further south because of a mechanism meteorologists call overrunning. When the southerly reached Hawke’s Bay, it undercut a relatively warm airflow from the northeast that had a much greater amount of water vapour. The cold air, being denser, stayed on the surface, forcing the warmer air to rise over it. As both airstreams blew inland, they were also forced by the hills to rise further.

As the warm air rose, it expanded and cooled, causing some of the water vapour to form ice crystals which fell, joining to form snow flakes as they bumped into each other. The air in which the snow formed had a temperature well below zero, but, having come from the sub-tropics, was still some 15ºC warmer than air at the same altitude that had originated in the deep south.

It may seem strange that such a heavy snowfall should occur as the world’s temperature is steadily warming, but the important factor here—as with the occasional heavy snows seen in parts of the northern hemisphere over the past decade—is the increase in water vapour in the warmer airstreams blowing out of the sub-tropics.

Overrunning has been a key player in most of the heavy rainfall events that have affected the provinces of Hawke’s Bay and Gisborne, such as Cyclone Bola and also the Esk Valley flood of April 1938. This latter event lasted three days, bringing up to a metre of rain to an area of Hawke’s Bay about 16 kilometres wide and 60 kilometres long from Kotemaori to the watershed of the Tutaekuri River. Parts of Napier, Clive and Hastings were flooded a metre deep and the level of Lake Tutira, north of Napier, rose by three metres after more than 300 millimetres of rain in 14 hours. Worst hit was the Esk Valley, where the river rose 10 metres in one stretch.

Fifty-four bridges were washed away or severely damaged across the district, stranding many people. Slips were widespread. One farmhouse, well above the Esk River, was partially destroyed by one and the occupants forced to flee through the rain to the woolshed. Minutes later, a larger slip crushed the rest of the house and buried the remains under 15 metres of debris. The family were forced to stay in the woolshed for three days before the river fell enough for them to escape on horseback.

So much sediment washed into the river that the Esk Valley was left covered in silt one to three metres deep when the floodwaters subsided. The water was more than two metres over the floor of the Eskdale Railway Station, and silt lay 1.6 metres deep. The silt was dug out of some houses but the old road running up the valley remains buried beneath the road since built over it. Once the silt had consolidated on farmland, new fences were installed; some posts were placed on top of the old buried posts.

An estimated 12,000 cubic metres of slips came down over the Napier-Wairoa railway line and more than 15,000 cubic metres of material washed out from under the tracks. The mouth of the Mohaka tunnel was blocked by five metres of debris and water backed up in the tunnel.

Some families were cut off for weeks and supplies had to be dropped to them by aircraft. One aeroplane crashed in the Pakuratahi Valley and the injured crew had to wait 19 hours before medical help could reach them as the bridge over the Esk River was down. A wire was taken across the flooded river by a man on horseback with some difficulty as the horse lost its footing several times. Once the wire was secured, a boat was attached to it, enabling the crossing to be made.

The extent of the erosion was mostly blamed on the intensity of the rain, which reached 420 millimetres in 24 hours at Puketitiri on April 24, but the killer Hawke’s Bay earthquake of 1931 may also have contributed to instability of the land. There had also been record rain in late January, when the remains of a tropical cyclone affected Hawke’s Bay, triggering some slips. Widespread thunderstorms in the middle of February added more rain to the landscape. One of these caused a flash flood in the Kopuawhara Valley that drowned 21 people working on the tunnels for the railway between Napier and Gisborne.

Much of Hawke’s Bay had recovered by the following summer, but not the Esk Valley, which remained a desolate wasteland of dried mud and dead trees, prone to dust storms as soon as the wind got up.

As well as being a year of heavy rain, 1938 also had record high temperatures in numerous places, some of which were broken only last summer. One of the reasons for this was that the sea around New Zealand in 1938 was about 1ºC warmer than average. This helped warm the air as well as increase rainfall by evaporating more water into the atmosphere.

Currently, the ocean surrounding the country is again warmer than average, so we face an increased risk of heavy rain in the coming months. Last summer, a strong El Niño affected the Pacific Basin. While a strong La Niña often follows close on the heels of a strong El Niño, this has not happened yet, so the coming summer may well be a neutral year, stuck halfway between the two.

So we should keep a watch out for tropical cyclones coming our way this summer and next autumn.