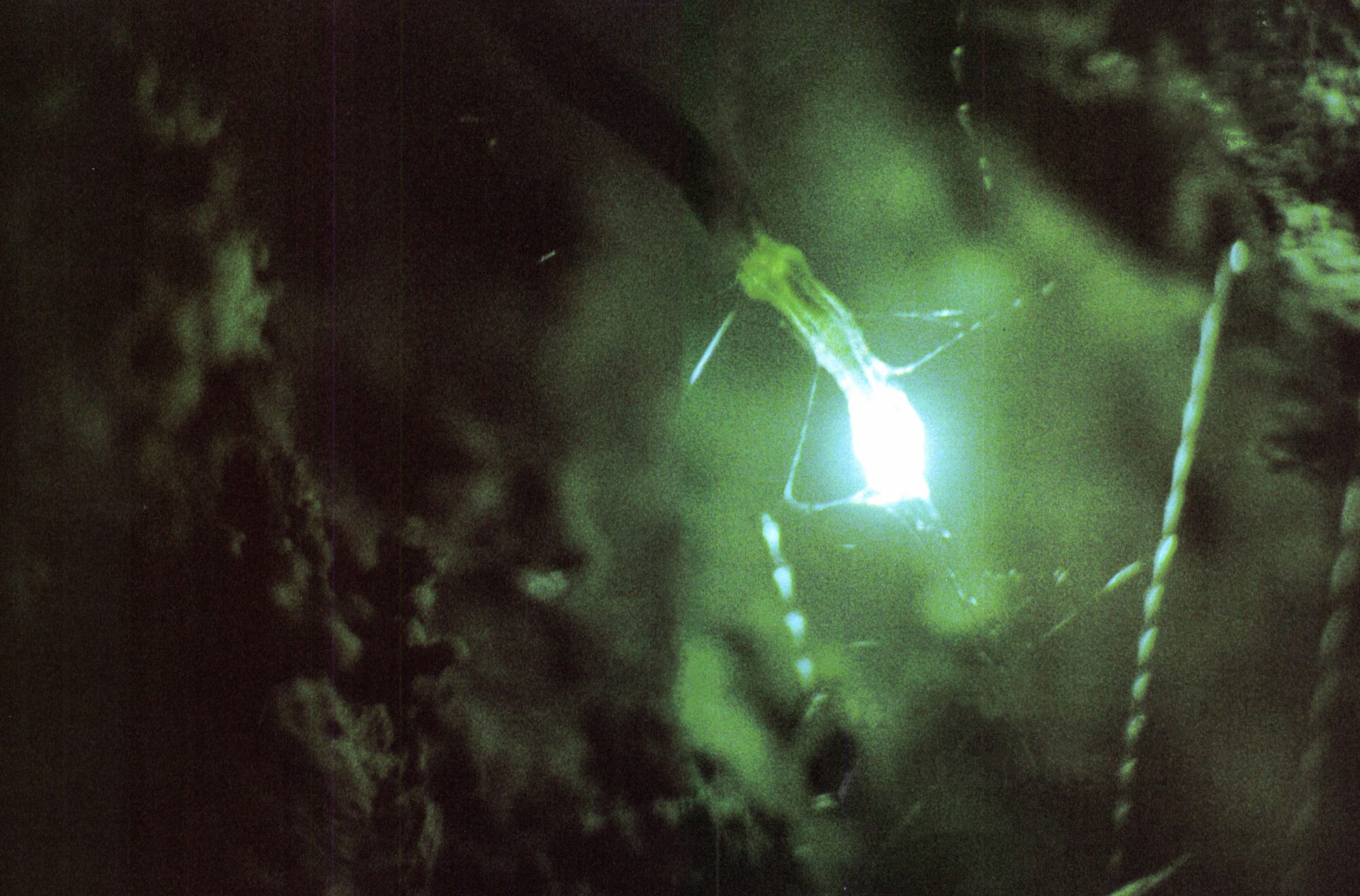 In the dark , damp corners of our cities there is a corrupt subcul­ture abroad. It is most active at night, when innocent victims, lured to these retreats by small, bright lights, are captured and murdered. In the same dark enclaves, confident males, often congregating in small gangs, lie in wait to seduce virginal females the moment that they slip out into the cool night air. Where conditions are crowded, there are nightly fights, too, sometimes to the death, and even some cannibalism.

Such a scenario would normally warn people to steer well clear of these ghettos of depravity, but they are an attraction that both residents and overseas tourists flock to see. They are not the red-light districts of our cities, but rather areas where the bluish light of bioluminescence brightens the blackness, and the lives and deaths of humble glow­worms play out a nocturnal drama.

For decades, the glow-worm grot­tos in limestone caves at Waitomo have been a world-renowned tourist stop, and, more recently, similar caves near Kaitaia and Te Anau have offered the same attraction at the northern and southern ends of the country. To enjoy the dazzling light shows at these remote locations, many visitors travel for hours, little realising that the same creatures can invariably be seen glowing just as brightly close to their own homes. Throughout the country, those who are prepared to venture out in the dark—and who do not dull their night vision with bright torches—can usually find glow-worms if they look in the right places.

Alongside streams, in public parks, on damp, south-facing walls  of cuttings, inside abandoned rail­way tunnels and under the seeping roofs of large culverts, the twinkling lights of these insects can commonly be seen. In all of these sites, glow­worms avoid surfaces that are splashed or washed by trickling wa­ter, and they are most abundant where soft mud covers the ground below.

Glow-worms are the carnivorous larvae of a gnat, Arachnocampa luminosa. These slender, semi­transparent grubs deserve the atten­tion they get not just for their glow­ing tail-lights, but also for the cun­ning traps that they set to snare their prey.

The larvae spend their lives suspended from the undersides of rocky ledges and overarching vegetation, from which they deploy their sticky insect traps. The person who in­vented the adhesive fly-papers that were commonly found hanging from the ceilings of our homes before the days of aerosol fly-sprays could well have been an admirer of glow-worm snares, for both employ the same trapping technique.

Each gnat larva lives in a simple tube made from silk and mucus that hangs like a hammock from the ceil­ing above by a number of silken guy ropes. The tube is more than twice as long as the worm-like grub which inhabits it. The worm can slither very quickly from one end to the other to catch prey which has be­come entangled in one of its snares or to retreat from predatory harvestman spiders that are partial to glow-worms.

By reaching out of its hammock, the glow-worm can hang an array of silk threads from the ceiling all around it. Unlike spiders, which se­crete silk from a complex set of glands in the abdomen, glow-worms secrete silk from a gland just behind the mouth, and decorate each thread with large beads of sticky mucus. Most glow-worms set out at least a dozen threads, and some have sev­eral dozen hanging down like a crys­tal chandelier around the insect’s biological light bulb.

Along shaded, overgrown banks the threads are seldom much longer than a couple of centimetres, but in the still air of tunnels and caves, where there is less likelihood of hanging threads being tangled by disturbing breezes, they are frequently up to 20cm long.

The threads are aerial fishing lines set to snare the glow-worms’ insect prey. The most common items on the glow-worm menu are midges, which seem particularly susceptible to the lure of glow-worm lights. Glow-worms are often found in sites where there is soft, wet mud below, because these mires are the midges’ favourite breeding grounds.

As adult midges emerge from their pupal cases, their instinct is to fly in search of other wallows to colonise. Setting out under the safety of darkness, it is natural for them to fly up towards a clear starlit sky. It takes very little imagination to realise that this is the false image created by a colony of glow-worms in a cave or tunnel, where a dark background bespeckled with bluish-white points of light could easily be mistaken for a starlit heaven.

It turns out to be an adhesive hell. As the midges approach the false stars, they become stuck to the sticky beads of mucus, and then, as they struggle, entangled in the hang­ing lines.

A glow-worm moves quickly to the threads that have trapped prey and hauls them up to its tube. With sharp, powerful jaws, it bites into the food and devours it immediately, discarding only the wings and other hard parts of the exoskeleton that it cannot digest.

The chemical basis for the glow­worm’s glow is not fully understood, but appears to involve a combina­tion of energy (in the form of ATP—the energy “currency” in living cells), magnesium, oxygen and the enzyme luciferase, all co-operating to generate light from a substrate molecule called luciferin. All known bioluminescent insects (per­haps a few dozen to a few hundred species of flies, springtails, bugs and beetles) use some variant of this sys­tem.

While some species emit light from their whole bodies, most have specialised light-producing organs. In glow-worms, light is generated by an extension of the Malpighian tu­bules (excretory organs analogous to a mammalian kidney). Some bioluminescent insects (such as fire­flies) are flashers, while others, like the glow-worm, exude a gentle, steady glow. Not all shine with the same hue, either. The glow-worm emission peak is a bluish 488nm, whereas that of the firefly is 547 – 600nm—a more orange light.

How many watts does a glow­worm produce? The best estimate obtained during the course of re­search for this story was that each worm is capable of producing one nanowatt (one thousandth of a mil­lionth of a watt). Glow-worms may be ever ready, but they are unlikely to dent the torch market—although, apparently, some people have tried to harness them for this purpose. In a book entitled How We Lived Then, a history of everyday life during World War II, the author noted that a shortage of torch batteries led to a novel solution: “A torchless West Country landgirl recalls finding her way home by the faint glimmer of a handful of glow-worms, placed on the mirror of her handbag.”

The growth rate of glow-worms is dependent on the availability of food. Hatching from clusters of round eggs laid in moist ceiling de­pressions, the young larvae (which can glow as soon as they emerge) disperse, crawling away to find suit­able vacant sites from which to sus­pend their first feeding traps.

Sometimes there is competition for space, and as growing larvae at­tempt to expand the size of their midge traps with more threads, ter­ritorial fights occasionally break out. Reaching half out of their hammock tubes, they strike out at each other while their tail-lights glow brighter as the conflict intensifies. It is not unusual for these disputes to be settled beyond further argument with the victor de­vouring the vanquished.

After several months—longer, when food is scarce—a larva reaches pupation size of 35 – 40mm. Before pupat­ing, it gathers in all of the sticky fishing lines that sur­round its tube, presumably in order that it does not become trapped in its own snare when it emerges as a delicate winged adult.

Suspended by a single thread from the ceiling, in a transparent skin made from its larval hammock, the pupating glow-worm immedi­ately becomes shorter and plumper, shrinking to about half its length. Over the next fortnight its transfor­mation into a delicate long-winged fly can be observed through the transparent skin that encloses it, and throughout the process the fluores­cent filament in the last segment of the body continues to glow intermit­tently.

In females, which are noticeably larger, this light takes on a new func­tion in the darkness as they near the time to emerge as flying adults. Per­haps it would be appropriate at this stage if their flashing neons were red, because they use them una­shamedly to attract recently emerged males. As the males gather around, their attentions cause the mature pupa to glow with even brighter pulses, and when the female eventually breaks out of her cocoon she is mated in­stantly.

All this indecent haste is neces­sary, for the females have but a short time to mate, disperse and lay their eggs. Many perish within a day, and none live longer than three days. Their lights are extinguished for the last time as they commence their egg-laying, then die exhausted.

Tales of the underworld