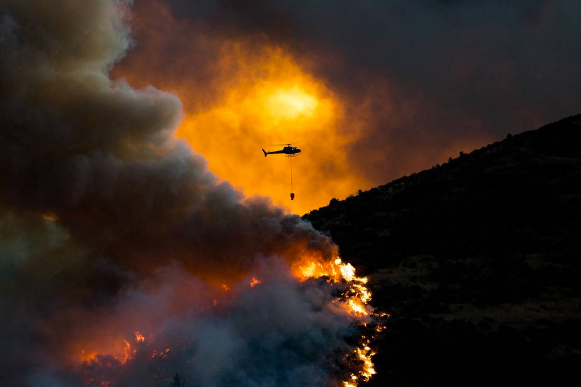 On Monday, February 13, an electrical fault on Early Valley Road at Lansdowne near Christchurch sparked a fire. An hour and a half later, another fire was reported several kilometres further east, near Dyers Pass, one of three roads crossing the Port Hills. By Wednesday night, the fires had joined to become one large conflagration, burning more than 2000 hectares, destroying nine homes and numerous other buildings and resulting in one death before they were finally extinguished, 66 days later.

The fires started when a dry northwest wind was blowing. It wasn’t particularly strong, but the northwesterly had low humidity, typical of air that has crossed a mountain range. During its descent from the top of the Southern Alps, 3000 metres above sea level, the higher atmospheric pressure compresses the air, causing its temperature to rise. By the time it reaches Christchurch, it is often 10 degrees warmer than before it crossed the alps. Most of the water carried by the air falls as rain when it rises over the mountains, so there is very little moisture left once the air reaches sea level on the Canterbury side, where the humidity can be as low as 20 per cent.

The Port Hills fire accelerated rapidly when the wind increased on Wednesday, February 15. It was now blowing from the northeast, meaning that at first, it brought back the low-humidity air spread over the ocean by the previous day’s northwesterly. A day later, the northeasterly was blowing air that had spent a long time over the ocean. Consequently, humidity shot up to 100 per cent at the top of the Port Hills, and 90 per cent lower down, helping firefighters control the blaze.

As temperatures rise around the world, wildfires are becoming larger and more frequent. The tropics are expected to warm faster than Antarctica in the decades to come. The increasing temperature difference between these two regions will strengthen westerly winds over New Zealand, raising the risk of wildfires over eastern areas of the country.