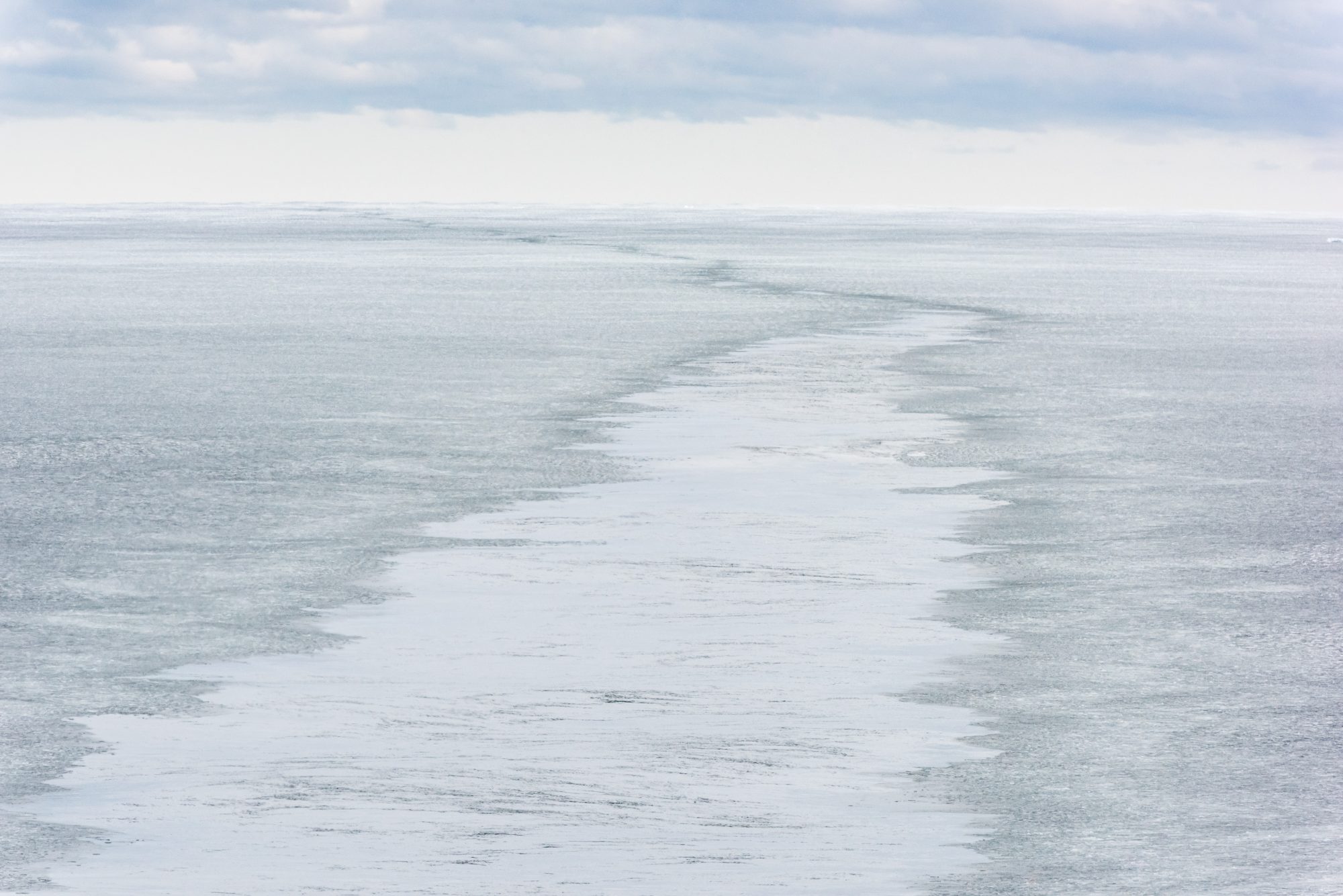 On January 22, 1841, the two sailing ships of the Ross Expedition, the Erebus and the Terror, crossed 74°20’ S—the furthest south any human had ever been.

In a generous mood, Captain James Clark Ross issued an extra ration of grog to his crew, and—though the polar sun never dipped below the horizon—the celebrations continued long into the evening. He later recorded in his diary, “the seaman’s favourite toast of  ‘Sweethearts and wives’ was not forgotten in the general rejoicing on the occasion.”

In the days that followed, the adventurers collected “several entirely new forms of creature” from the sea floor, and discovered an immense volcano “emitting flame and smoke in great profusion”, which Ross named Mt Erebus. They then approached a vast frozen cliff that towered above the ships’ masts and extended east as far as they could see.

“This extraordinary barrier of ice, of probably more than a thousand feet in thickness, crushes the undulations of the waves, and disregards their violence,” Ross wrote. “It is a mighty and wonderful object, far beyond any thing we could have thought or conceived.”

It also proved impassable, and with winter approaching, Ross set course back to Hobart, leaving the icy waters to the whales, penguins and petrels for another half century.

The ice barrier would later be named the Ross Ice Shelf, and the enormous bay into which it plunges, the Ross Sea.

This southernmost sea in the world stretches from Cape Adare in the east to the Bay of Whales in the west, and extends deep into the Antarctic continent. Its 4000 kilometres of coastline encloses a vibrant and virtually pristine ecosystem: a hub of biodiversity and a hotbed of evolution rivalling the Galapagos Islands. It’s hosted human drama, too: Scott, Shackleton and Amundsen—the pole-seekers of the ‘heroic age’ of Antarctic exploration in the early 20th Century—all began their epic journeys there.

At the time of Ross’s voyage, New Zealand was a fledgling colony, and the Treaty of Waitangi just a year old. Since then, through exploration, politics, fishing and science, the Kiwis who’ve voyaged in Ross’s wake have made this a place where our small country looms large.

Head south from Stewart Island and a string of rocky New Zealand outposts lead you into the Ross Sea. The Snares, the Auckland Islands, the Campbells, the Ballenys, Cape Adare, and Ross Island, on which the New Zealand research facility—Scott Base—is located.

“It is an area that New Zealanders think of as being almost part of New Zealand,” says Gary Wilson, marine science and geology professor at Otago University and director of the New Zealand Antarctic Research Institute. “We’ve got a longstanding connection to that part of the world.”

That connection was established in 1923, when Britain claimed the Ross Dependency—spurred by Norwegian interest in whaling the area—and passed the administration of it to New Zealand.

Before then, New Zealanders had accompanied both Scott and Shackleton on their Antarctic quests of the early 1900s, and had worked on the whaling boats and infrequent scientific expeditions that followed in the 1920s and 30s. But successive New Zealand Governments remained largely uninterested in developing the country’s claim to Antarctica, until 1957, an eventful year of frenzied activity in the Ross Dependency.

Under Edmund Hillary’s leadership, Scott Base was built at the foot of Mt Erebus on Ross Island, giving New Zealand a permanent presence in Antarctica.

In October 1957, Hillary also led a Ross Sea-based team supporting the Trans-Antarctic Expedition—the first successful crossing of the continent, by Briton Vivian Fuchs. (With four other Kiwis, Hillary headed out from Scott Base on tractors to lay supply depots for Fuch’s party—and then, in what Hillary later called a ‘jaunt’, made a cheeky, unscheduled 650-kilometre dash for the South Pole themselves. They reached it just after the New Year amid accusations they had stolen Fuch’s thunder—the controversy, according to one newspaper, briefly making Hillary the “most hated man in England”.)

The year 1957 was also the focus of intense global scientific effort across Antarctica as part of the International Geophysical Year, and New Zealand scientists began a research programme that has continued uninterrupted for 60 years.

The international co-operation that year laid the foundations for the 1961 Antarctic Treaty—often hailed as one of the most successful international agreements—under which New Zealand and all other nations agreed to put aside their territorial claims and preserve the continent for “peace and science”.

They did not, however, enshrine any protection for the surrounding seas. In 1982, treaty nations established the Commission for the Conservation of Antarctic Marine Living Resources (CCAMLR) to manage marine resources in the Southern Ocean, including the Ross Sea, though the whole area remains part of the global commons.

Despite this relative lack of formal protection, the Ross Sea has been little compromised by the human expansion. A 2008 Science study mapped human impacts on the oceans globally and found that the Ross Sea—sometimes called the “last ocean”—is the healthiest marine ecosystem on Earth.

Though it is almost entirely covered by sea ice for most of the year, its chilly waters support thousands of species, from tiny fish with antifreeze in their blood to the elusive colossal squid.

A third of the world’s population of Adélie penguins spend summer in its waters, alongside a quarter of all emperor penguins. New species of invertebrates are being discovered faster than they can be catalogued. Crucially, despite whaling and limited sealing last century, its top predators—killer whales, minke whales and five seal species—are still abundant.

One key part of the food web, though, is under threat. The two-metre, 100-kilogram Antarctic toothfish is the Ross Sea’s top fish predator, occupying a role similar to sharks in other ecosystems. It is also in high demand in top-end restaurants, and for the past two decades, commercial fishing fleets have hunted Antarctic toothfish in the Ross Sea. Here, too, New Zealand played an outsized role—in 1997 sending the first fishing boat south. It was followed by vessels from up to 12 nations.

Although the fishery is regulated under the Antarctic Treaty system, and has been certified (controversially) as sustainable by the Marine Stewardship Council, some scientists are concerned about the potential for overfishing, arguing that there is evidence the ecosystem is already being altered and that not enough is known about toothfish behaviour, distribution or overall numbers to set meaningful catch limits.

“We led the charge into the Ross Sea fishery—we opened up that whole can of worms,” says Barry Weeber, co-chair of the Environment and Conservation Organisations of Aotearoa New Zealand (ECO) and adviser to the Antarctic Oceans Alliance. “The tragedy is that once you open up an area, it’s very hard to close it again.”

To prevent any further degradation of our most untouched ocean, and to preserve one part of the globe where scientists can examine a near-complete ecosystem, conservationists like Weeber have spent the past decade pushing for a large-scale Marine Protected Area (MPA) in the Ross Sea.

“It’s not only the last chance to study it, it’s also a question about human forbearance,” he says. “How much of the planet does the human footprint need to tread on?”

Since 2011, New Zealand and the United States have been trying to secure support for a joint MPA proposal that covers 1.5 million square kilometres of the Ross Sea, although a large area is set aside for controlled toothfishing. To succeed, the proposal must be accepted by all 25 members of CCAMLR. At the annual meeting in Hobart in October 2015, after years of rejections, a revised plan finally won support from China. This year, delegates will try to get the final holdout, Russia, over the line.

But there are threats even the most stringent MPA cannot ameliorate.

Since the Industrial Revolution—already well under way at the time of Ross’s voyage—human activities have been increasing the concentration of greenhouse gases in the atmosphere.

The poles are the parts of the planet most vulnerable to climate change, says Gary Wilson. “That cold engine at the bottom of the planet drives a number of global systems and it’s more susceptible to warming,” he says. “It all comes home to roost in Antarctica.”

The vulnerability of the West Antarctic ice sheet to climate change is well known—its collapse may already be inevitable. How warming is impacting on the Ross Sea on the other side of the continent, however, is less certain.

The processes at work are complex, arcane, interwoven. The maximum extent of sea ice varies wildly from year to year and recently reached record highs. The Ross Ice Shelf, too, moves, shifts sideways, ebbs and flows.

That’s how, 175 years after James Clark Ross voyaged into the record books, a new record was set for the furthest south ever sailed. In February this year, the Heritage Expeditions ship carrying the photographer of this feature—as well as two descendants of Ross—nosed up to the Ross Ice Shelf in the seldom-visited Bay of Whales and notched up 78°43.971’S.

That doesn’t necessarily mean the ice shelf is retreating, cautions Wilson. “The position is so little different from 100 years ago it’s in the noise level,” he says. “We don’t know if it is receding—but we’re trying to find out.”

Much of New Zealand’s current Antarctic research is linked to climate change, and Ross’s “extraordinary barrier of ice” is a priority, he says.

Scientists from the University of Otago spent last summer camped on the shelf. They drilled through ice, measured snow and radar-imaged the sea floor in an attempt to understand the extent and movement of the Ross Ice Shelf in the past, and how it will respond to future warming of the ocean and atmosphere.

As yet, however, so much remains unknown about how our warming world will change our last untouched ocean. Like Captain James Clark Ross, we’re sailing into uncharted waters.

What's happening in Antarctica this summer?