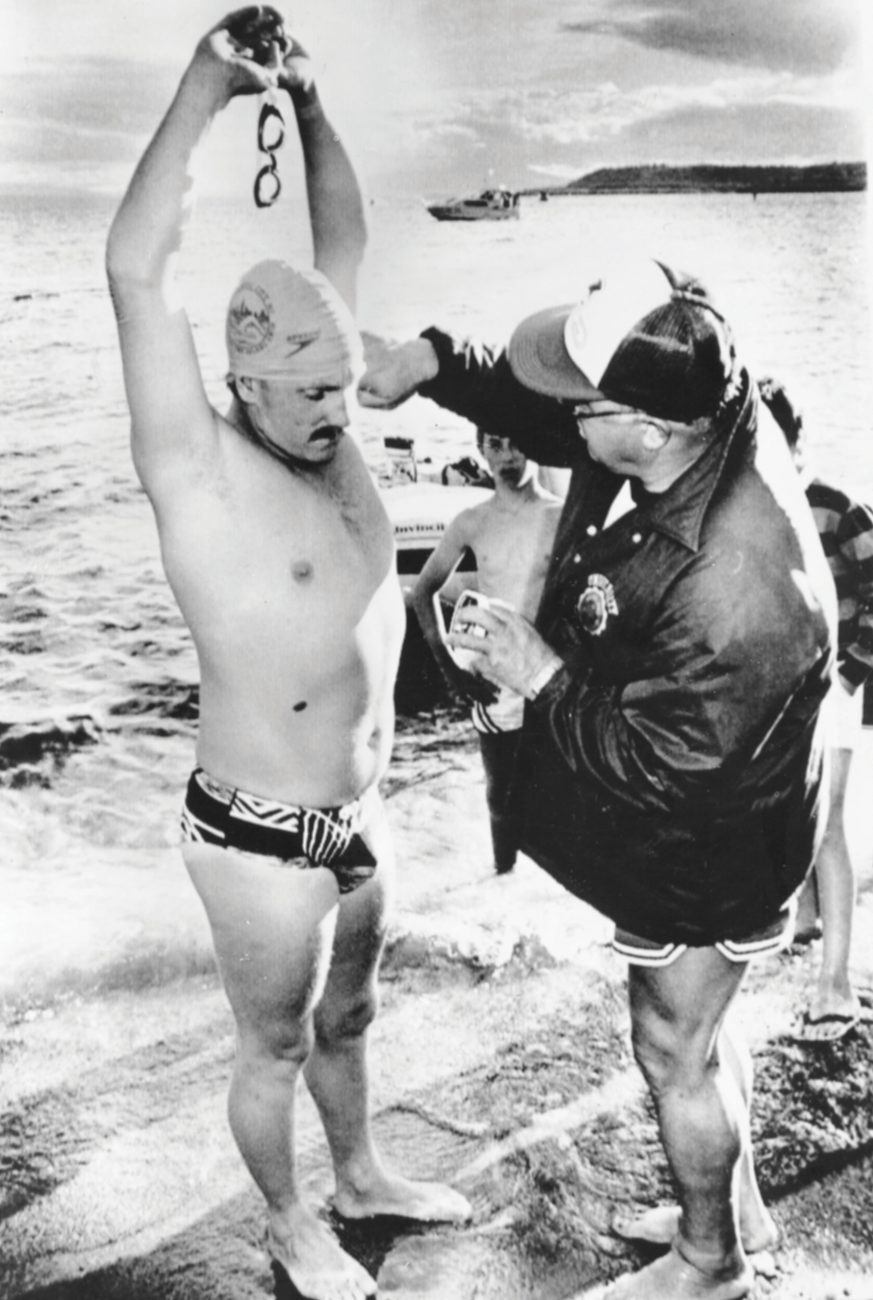 In inky darkness, Philip Rush dived from the three-metre rigid inflatable and touched a hand to Dog Rock, at the southwest extremity of Kapiti Island. This formality dispensed with, he turned and struck out in the direction of D’Urville Island, more than 80 kilometres away, trailing a fluorescent white foam. Aboard support boats, countless eyes peered into the night trying to judge his progress. It was a little after 2am on Sunday, February 18, 1990.

Rush, and the five others who would take turns in the water, had a big challenge ahead—retracing Aotearoa’s earliest-known open-water swim; an epic of endurance undertaken by Hinepoupou, of Ngāti Kuia, in the mid-18th century.

One version of the legend has it that early one morning, Hinepoupou’s husband and his brother set off by canoe for Rangitoto ki te Tonga, or D’Urville Island, leaving her abandoned on Kapiti. With breathtaking pluck, she decided to swim across to her father on Rangitoto and exact her revenge on the men.

Another version holds that she married two brothers, who became homesick for Taranaki, and in time became unfaithful. Whatever form the narrative takes, it ends with Hinepoupou swimming to D’Urville. She may have lashed together flax sticks as buoyancy aids, or rested on floating kelp, and she undoubtedly took advantage of the complex Cook Strait currents. Climbing onto rocks and small islands at intervals to rest, she is said to have taken three days to complete the gruelling swim.

Rush, the swim leader, had a day job with the Fire Service. It helped that he was also the world’s top ultra-marathon swimmer. Among other achievements, three years earlier he had set a record for the solo 115-kilometre English Channel triple crossing, completing it in a sizzling 28 hours and 21 minutes. Joining him in the 1990 relay team were marathon swimmers Karen Bisley, Donna Bouzaid, Christine Harris, and Perry Cameron, and 14-year-old college student Kaine Thompson.

At 3am, it was Bisley’s turn. She warmed up and entered the water, feeling as though she had dived into half-set jelly because of the plankton density.

“Their slime enveloped my body. With each stroke I felt like I was swimming through mud,” she later recalled. Then there were stinging jellyfish and the likely presence of sharks to contend with.

Fighting a strong tide, the team made landfall at 4.30pm on day one at Waihi Point, on the western arm of Queen Charlotte Sound. Caught in the same tide, Hinepoupou had been swept south to the desolate Brothers Islands.

Local historian Olive Baldwin, whose dream this swim was, had studied the Cook Strait tides herself with drift tests, and had sought the expert advice of a navy hydrographer. But no amount of route planning could tame the elements. When the swimmers again took to the water, after a rest day, they encountered a big swell and a 30-knot wind.

However, day three, from Chetwode Islands at the head of Pelorus Sound to D’Urville, was swum in a glassy sea. To the amused surprise of all, Rush completed his final spell in the water naked, having hung up his togs (literally)—to mark what was to be the final performance of his sporting career.

When the swimmers, joined in the water by a jubilant Olive Baldwin, finally came ashore at D’Urville, they had turned Hinepoupou’s legendary feat into a 20th-century reality.