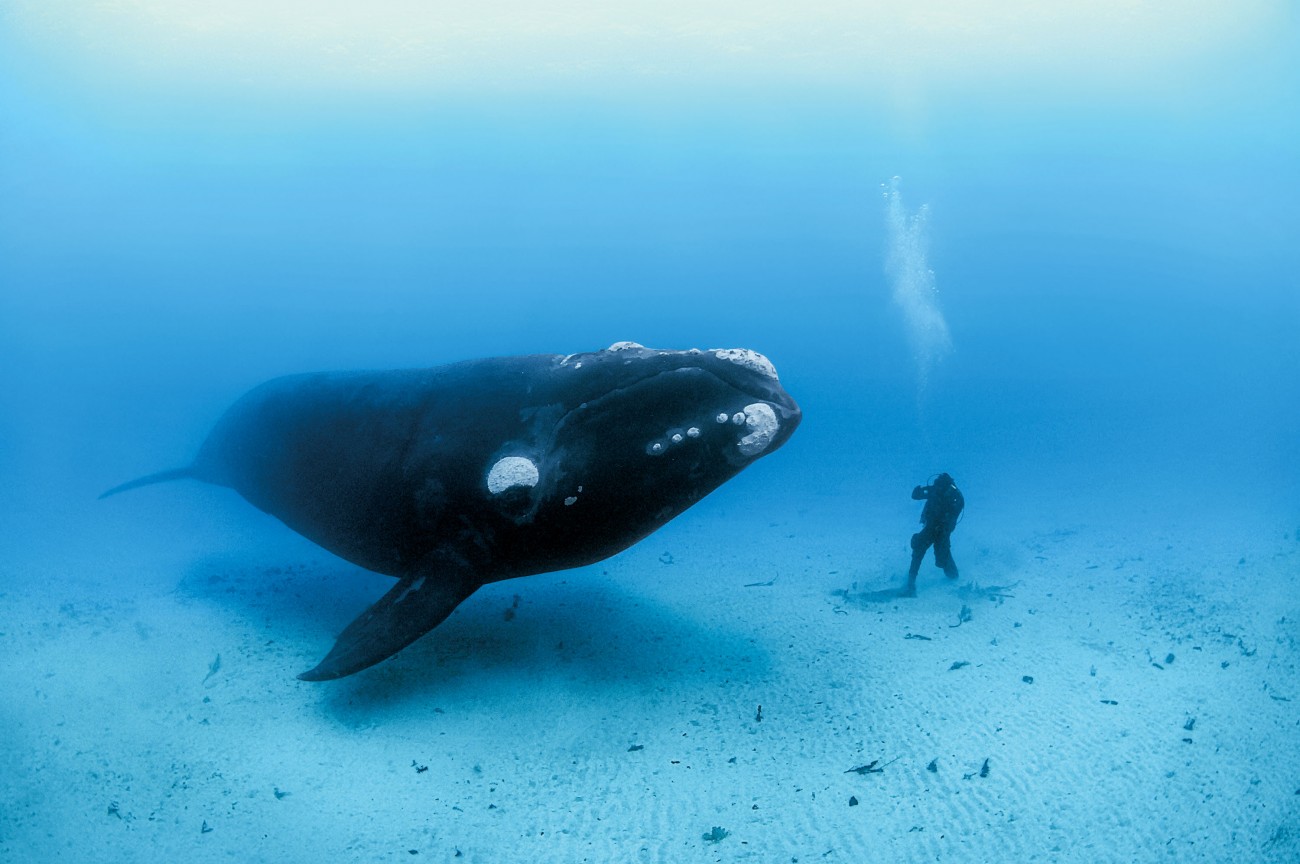 In production of this issue our gallant contributors braved frightening cold, giant waves, microscopic viruses and fish of unusual size.

While Brian Skerry’s images of southern right whales present a vision of a Southern Ocean utopia brimming with accommodating cetaceans, the reader must be reminded that every so often one encounters a grumpy whale. Skerry’s nemesis ap­peared on day four of his assignment, a juvenile male hurtling out of the blue. “It blew by like it was strafing me,” he says, behaviour that he is at pains to point out was radically different from that of the other whales. Surmising that it was a “frustrated adolescent”, he moved to shallow water. The whale followed until the pair were in water significantly shallower than the whale was long.

“It came over the top of me and started to swing its tail down like it was going to swat me. I did my best to get out of the way—God forbid it had made contact, I would have been killed”.

Finally, the whale faced him and produced a gunshot sound—a loud crack usually associated with male–male com­petition—before Skerry escaped to the safety of an inflatable boat. The whale, which also sabotaged a subsequent photo shoot, earned the moniker “Moby Prick”, and Skerry, the du­bious honour of being the only human known to have been “shot” by a whale. “But,” he says, “I’m just grateful they don’t have teeth.”

Facing a smaller foe, Arno Gasteiger was ushered into a sanitised world of space suits and facemasks to photo­graph the feature on viruses. Priming himself with copious quantities of olive leaf extract, he set to work in a swirling miasma of H1N1.

“I had made it through the whole winter without getting sick,” says Gasteiger. “But after a while I realised that the lab was probably the safest place in New Zealand—certainly saf­er than the flight to Wellington with everyone coughing and sneezing on the plane.”

Living and working on the remote outpost of Centre Island in Foveaux Strait in the 1970s gave writer Rod Rust the opportunity to pioneer what has become recognised as one of the finest big wave surfing locations in the country.

He recalls his first wave at the island, which turned out to be significantly bigger than he had anticipated. “The wave was suck­ing out and the bottom coming up so fast. I picked a line and leaned hard into a turn. The wave hissed loudly behind me and the wall of the wave loomed in front, looking as if to smash me and then, as it spat me out onto the shoulder, it exploded in a roar,” he writes. “I realised the irony of challenging the very reef I was responsible for warn­ing people to avoid!”

Derek Grzewelski’s Airedale puppy Maya accompanied him for much of his assignment on huskies for this issue. It was a story that he admits was “close to his heart”. In writing it he was able to sign-off on the passing of his previous dog Mops, to whom he dedicated his last book: “To Mops, the best dog there ever was, and to Maya who is ever better.”

While Maya may never pull a sled, Grzelewski hopes to train his fellow powder hound to dig for avalanche survivors, a role suited to energetic Airedales and a task increasingly rel­evant considering the three avalanche fatalities in the South Island back-country this year.

Whether driven by catharsis, nostalgia, enquiry or intrigue, every contributor to this issue has invested a lot of personal energy to bring these stories to print. Energy that we hope will be evident in the words and pictures.