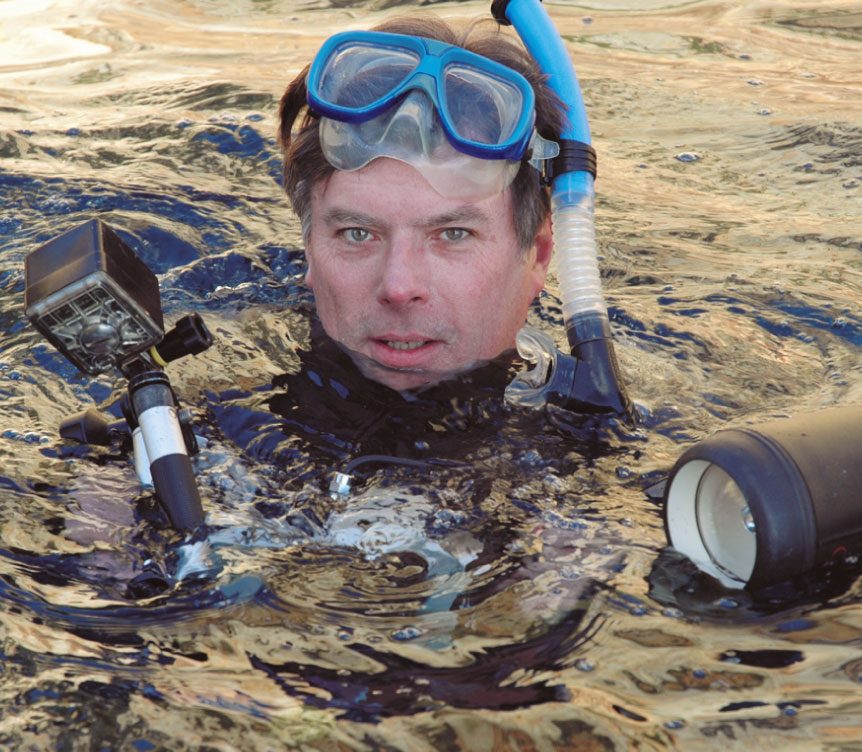 Iain Anderson has been diving since the early 1970s but only took up underwater photography nine years ago. Although it was not long before he photographed his first jellyfish, most of the images reproduced in Life at the top (pages 62–75) were captured in the last two or three years. “In the early days,” he says, “many of the surface shots were taken while snorkel­ling during rests between dives. Now one of my principal dive destinations is the surface.”

Photographing the organisms found there has not been easy. Most of the creatures living near the surface are transparent to a greater or lesser extent. Anderson continues, “They don’t show up well in natural light and light from your strobe goes right through them. I shud­der when I think of all my wasted rolls of underexposed film. I’ve found that ‘nuking’ the creatures with strobe set to full power is the most reliable way of getting a worth­while image. It is sometimes even possible to make them fluoresce.

“Bobbing up and down at the surface is bad for your photography, not to mention your stomach. It is hard to keep a small animal in focus when both you and the animal are moving relative to each other. I found that one solution was to get down a metre or two below the surface, however it is difficult to maintain your depth. You are always slowly accelerating up or down. Then you have to get the animal down to you also. Sometimes I could get a jellyfish or ctenophore to descend with me by creating downward water currents with my hand. Other times the disturbance I set up in the water when I descended was like the wake of a sinking ship, not infrequently sending the animal off in the wrong direction towards the surface.

“Bubbles from my single hose regulator are also a real nuisance, especially when trying to photograph while looking up. The noise they make is annoying too. One of these days I will invest in a quiet rebreather or buy a reconditioned two-hose regulator.”

Has Anderson had enough? “No, no, no. I keep learn­ing things that astonish me and this keeps up my interest. Looking at surface creatures has led me to do things out of the ordinary, including diving outside normal hours. A typical day-tripper dive boat usually departs between 8 and 9 am and returns around 4 pm. Although I do plenty of day dives, I’ve learned that the best time to visit the surface is at night when most other divers are at home or in bed—the time when all the critters come up to eat.”