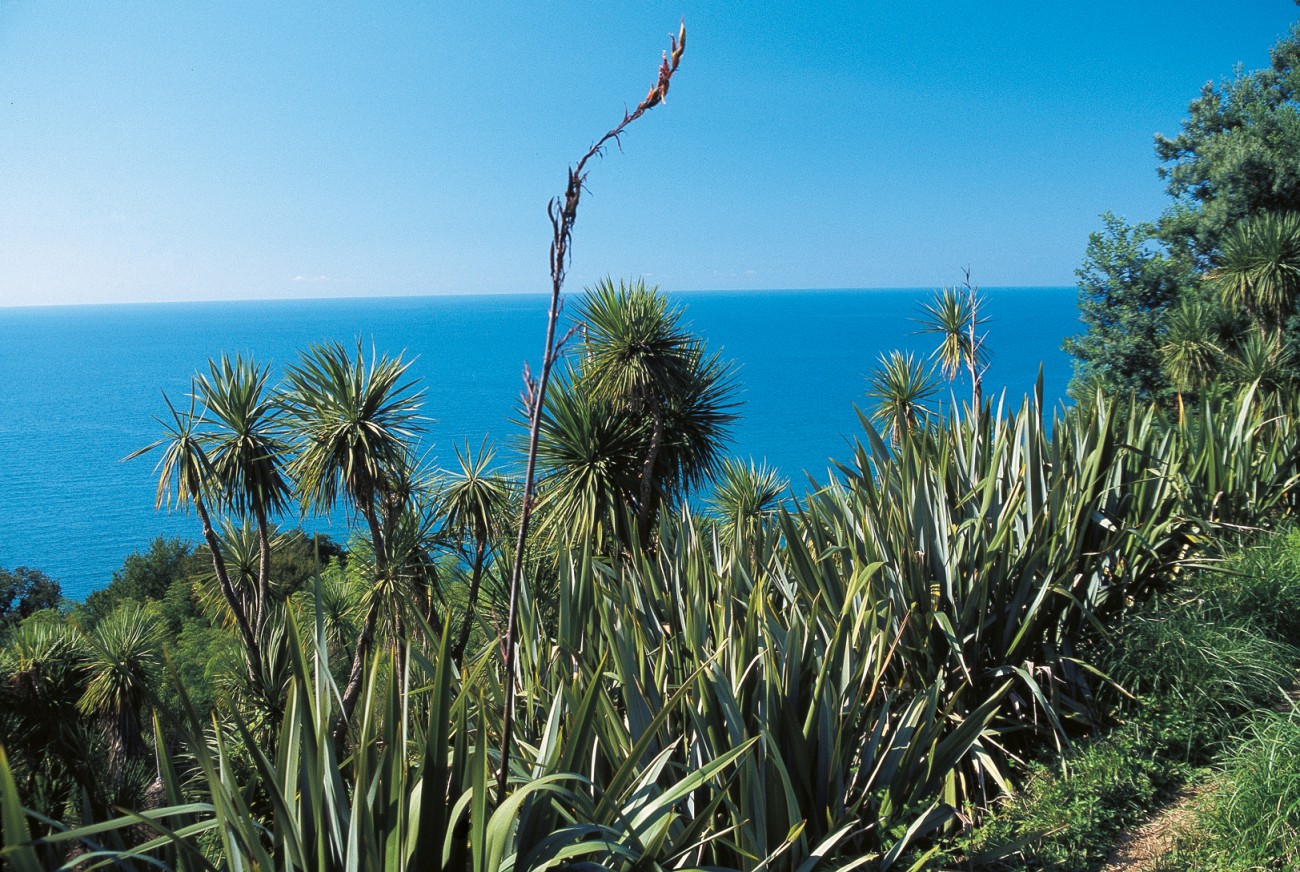 For the few visitors who make it to this obscure corner of the former Soviet Union, the first hint that something botanically odd is going on comes at a Roman fortress just north of the Turkish border. Its 18 black basalt towers and kilometres of crenellated walls enclose five hectares of lush gardens, where villagers tend kiwifruit vines and vegetable plots among the ruins. But, for Kiwi visitors at least, having one of the world’s best-preserved examples of Roman military archi­tecture to oneself is not the only surprise: Gonio Fortress is also crowded with cabbage trees. Dozens of these unmistakeable New Zealand icons are scattered throughout the gardens. Others, the bases of their trunks whitewashed, form an avenue through the centre of the fortress, and two neat rows of flax lead to the modest grave of one of Georgia’s earliest saints.

After this unexpected find, I started seeing New Zealand flora everywhere. In the nearby city of Batumi I spotted a clump of flower­ing cabbage trees by the port, and many more surrounding a lake in a neglected park. A flax bush was thriving near Stalin’s one-time home, and a group of old men were playing backgammon outside a betting shop in the shelter of what looked very much like a Dracophyllum. What on earth were all these New Zealand plants doing in a country known to most New Zealanders for little more than its participation in the rugby world cup?

I found a clue a few days later at the Batumi Botanical Gardens, 10 km north of the city at the aptly named Green Cape. There, next to a bamboo picnic pavilion and a sign reading “Section of Neu-Zeiland”, a hillside thick with cabbage trees, flax and manuka dropped steeply to a sandy bay. Spelling aside, it was a scene straight out of New Zea­land—until a carload of holidaying Georgians pulled up in a modified Lada, Russian pop blaring from the stereo, to photograph each other in front of the exotic vegetation. They barely noticed the eucalypts across the road in the Australian section.

Later I tracked down Yuri Dzirk­vadze, deputy rector of the Batumi Agrarian Institute, whose school occupies a corner of the botanical gardens. After some linguistic dif­ficulties, he told me—I think—that the gardens boast more than 2000 species of woody plant, 500 flowers and herbs, and one of the best collections of bamboo and camel­lia in Europe. There’s also a pretty good collection of rhododendrons. The gardens’ 114 ha are divided into three separate parks and nine phy­togeographical sections, covering, among other parts of the world, East Asia, North America, Australia, the Mediterranean, the Himalayas and Transcaucasia.

At 1.2 ha and with a mere 19 species, the New Zealand section is one of the smallest, but also one of the most interesting, Dzirkvadze said. For decades visitors have been helping themselves to cuttings from the cabbage trees and flax, which are now popular decorative plants around Batumi. He then fished out a list of New Zealand species planted at the cape. And thank goodness for Latin: the Georgian language, with its unique alphabet and Byzantine grammar, makes even Russian seem simple. Apart from flax (Phormium tenax) and the ubiquitous cabbage trees (Cordyline australis and C. banksii), the species in the New Zealand section include manuka, kowhai, leatherwood, broadleaf, lancewood, lowland ribbonwood, a Hebe cultivar, a Pittosporum and two species of totara. All very interesting, but I still didn’t understand how so much New Zealand flora had ended up in Georgia.

I found the answer on Dzirkvadze’s bookshelf, in the Concise Reference Book on the History of the Batumi Botanic Gardens. This volume explains in charmingly idiosyncratic English how the gardens’ beginnings can be traced to the arrival in Batumi in 1893 of the Russian scientist Andrei Krasnov. Impressed by Batumi’s mild climate and its similarity to that of the temperate Pacific—annual rainfall 2600 mm, average temperature in summer 22°C and in winter 8°C—he believed an exotic garden could help drag the region out of poverty. “In spite of the neglected state of this area caused by unfor­tunate past, this site is magical with its south­ern climate,” he wrote, clearly relieved to have escaped the bitter winters at Kharkov Uni­versity. Krasnov’s goal was to create a “second motherland of subtropi­cal cultures”, concen­trating on rare and valuable plants from lands with soils and cli­matic conditions similar to those of Batumi. In the process he hoped to make Georgia’s Black Sea coast as prosperous as the holiday resorts of Western Europe.

In 1895 he embarked on a year-long expedi­tion to India, China and Japan, collecting flora on the way; and in 1912 the Russian govern­ment granted 100,000 roubles for the purchase of 72 ha on Green Cape. In the following year some 2000 species were planted on the cape, and Krasnov struck deals with botanical institutes across Europe, the US and Japan. The London Royal Botanical Gardens alone sent 300 species, including several from New Zealand. An optimistic Krasnov said: “[L]ess than 25 years will pass and this re­gion will be better than the Riviera, people will walk along the alleys of evergreen oaks and palms and northern man will find the illusion of tropical countries here.” When Krasnov died in 1914 he was buried in his beloved gardens, at the end of an alley of cypress trees overlooking the sea.

Somehow his gardens survived the Russian civil war, the two world wars and Georgia’s post-independ­ence chaos and economic collapse. But, like the rest of the country, they have fallen on hard times. Few trees are labelled and piles of rubbish moulder in the undergrowth. The Soviet-era cable car, which once carried crowds of picnickers up the cape, is now a jumble of rusting steel. And Batumi’s biggest hotel, instead of accommodating tourists drawn to the city’s beaches and gardens, is home to hundreds of refugees from Georgia’s disastrous war with the breakaway province of Abkhazia. If that wasn’t bad enough, early in 2004 the tinpot ruler of Adjara province—which includes Batumi and the botanical gardens­ tried to secede, bringing Georgia to the brink of another civil war. He got as far as blowing up the bridges link­ing Adjara to the rest of the country before he fled to Moscow.

Krasnov’s dream of a prosperous Black Sea coast rivalling the French Riviera is thus as far from reality as ever—but the climate is still mild, the landscape magical and the wine abundant. The difference now is that, for the fi rst time in a century, Georgia is open to Western visitors. And some of those visitors will have travelled thousands of kilometres to find themselves gazing out over the sea and Krasnov’s cabbage trees, and will wonder whether they have left home at all.