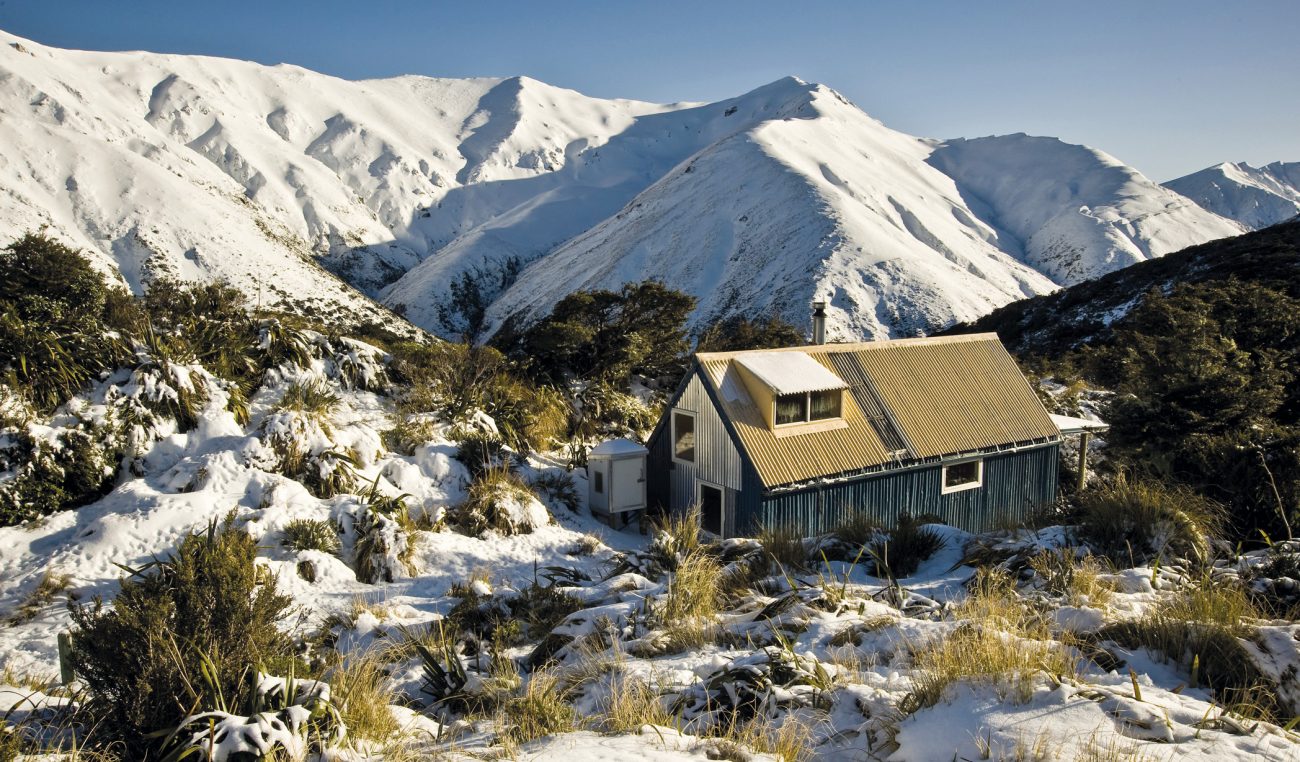 Howletts Hut lies in a sheltered hollow on Daphne Ridge, an offshoot of the main Ruāhine Range.

An appealing hut with an orange roof and blue walls, it has fine views of Black Ridge as well as an expansive vista of the Hawke’s Bay hinterland. In summer, it’s a place of golden tussocks, khaki beech fringes and rugged mountains streaked with grey scree slopes.

From the hut, an hour’s tramp along Daphne Ridge leads through a stunted patch of mountain beech, over scree and tussock slopes, and up to a knoll beneath Tiraha, from where there is a stunning view of the Sawtooth Ridge. From this angle, the ridge certainly earns its name, with a broken spine that drops sharply to very steep, eroding gullies. During winter, after a southerly has dumped snow and an overnight freeze has cemented it in place, the ridge resembles the Southern Alps more than the Ruāhines.

The hut takes its name from Hawke’s Bay schoolteacher and botanist William Howlett. Originally from England, Howlett came to New Zealand in 1875 as a remittance man (often a later-born son, not in line for any land or significant inheritance, who was paid by the family to go the colonies).

He was an eccentric character. His strong interest in alpine plants drew him into the range from Mākāretu, where he taught at the local school. Naturally enough, the weather severely compromised his ability to explore the area, so in 1893–94 he and a companion built a hut on what he called Daphne Spur, named after the native daphne (Pimelea buxifolia) that grows there. In 1902, he even brought his young wife up the ridge to spend their honeymoon at the hut.

Howlett’s construction lasted until about 1930. In 1938, a replacement hut was built, but by the 1970s, it had seen better days. The Heretaunga Tramping Club embarked on a major rebuild, and has maintained it ever since, with continual improvements. The hut has a distinctive design, with a steep gabled roof, and is cosy—especially on a winter’s night with the pot-belly stove glowing.

Getting to Howletts is possible on several routes, all of them quite strenuous. The most direct route goes up the Tukituki River to the base of Daphne Spur, where a very steep grunt leads up to the hut (allow 6–8 hours). The Tukituki is impossible when flooded, but fortunately there’s an overland route that avoids all fords. This begins from Kashmir Rd, climbs onto the main Ruāhine Range past Longview Hut, then traverses the tops over Otumore and Taumatataua to reach Daphne Ridge. It’s a good summer route (allow 7–9 hours), but is exposed and can be slow-going in the snows of winter.

A third option is to approach via Rosvalls Track, Black Ridge and the Sawtooth. Most parties attempting this route stay at Tarn Bivouac on the way in (allow 9–12 hours).

Whatever way you reach Howletts Hut, you’ve earned a good rest in a fine spot.