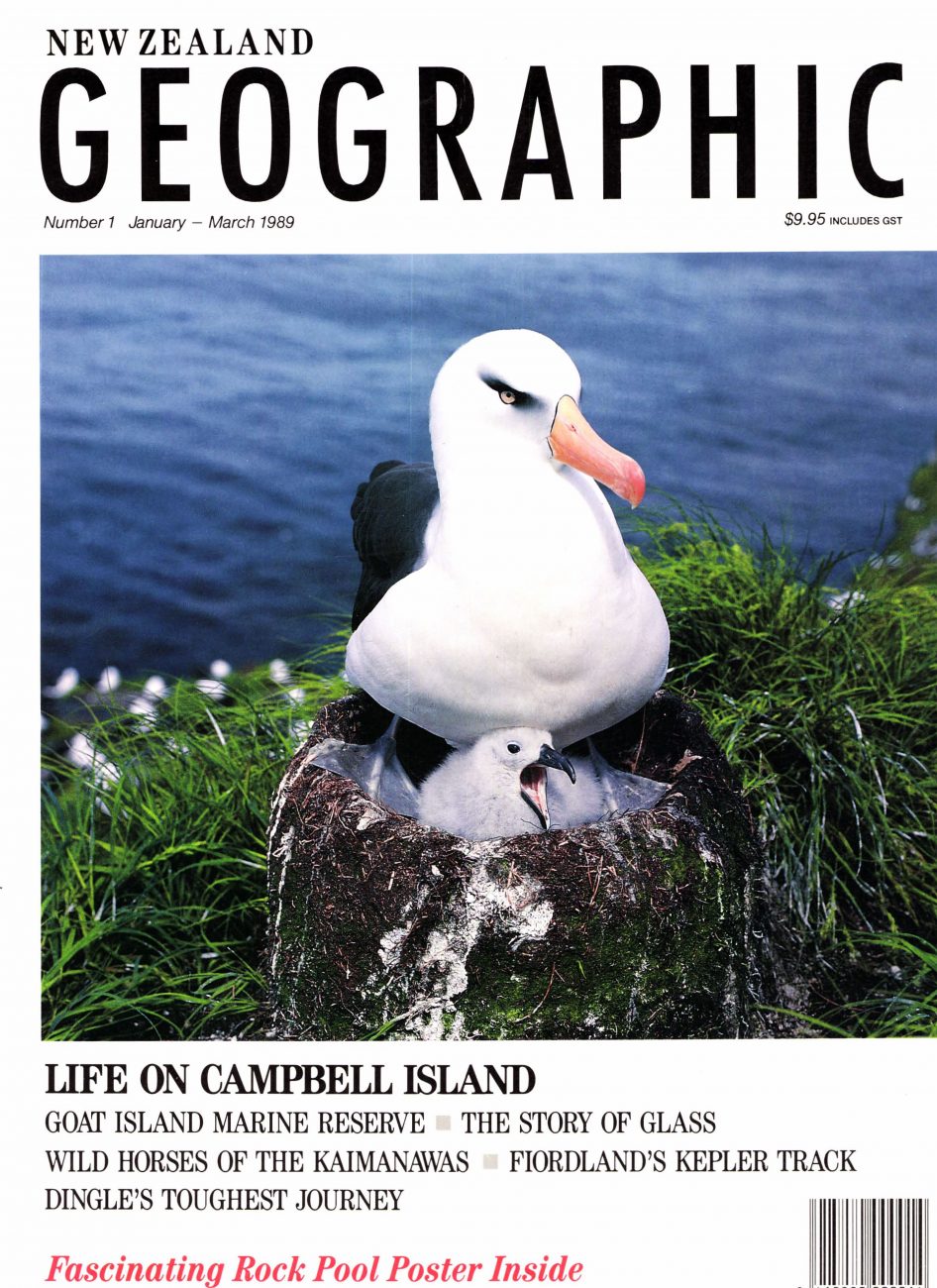 New Zealand Geographic was born in a leap year. This seems fitting, in retrospect. The magazine was a leap of faith, made at a time when launching anything was a gamble. The New Zealand sharemarket had tanked in 1987, and the economy was in the doldrums. One of the casualties was the advertising agency where I worked as an account executive and the magazine’s founding publisher, John Woods, was a principal.

After Arrow Advertising shot spectacularly into the dust, Woods and I set up a two-man PR agency in a one-room office in Grafton. I wore a tie, read the National Business Review, and wrote direct-marketing letters and brochure copy. Woods, an entrepreneur to the core, heard that New Zealand Adventure magazine had fallen on hard times and was up for sale. He bought the title, and went to live in Ohakune to revive it.

In early 1988, Woods showed me a copy of Australian Geographic, which had been launched by electronics magnate Dick Smith in 1985, and suggested we have a go at creating a New Zealand version. The tie came off, the NBR subscription lapsed, and by year’s end we had the first issue out, in time for Christmas.

Then came the challenge of turning a precocious leap into a sustained run. It felt like hanging on to the back of a bucking and unpredictable horse—there were two receiverships within two years—but a quarter of a century and some 500 feature stories later, the magazine has settled into its stride, including being named Newsstand Magazine of the Year last year.

When New Zealand Geographic was launched, Woods and I described it (perhaps a little grandiosely) as “the journal of New Zealand”. A journal implied a serious intent.

We wanted the magazine to be a publication of record: a durable, collectable source of information about all things Kiwi. But we also wanted to drill deep into the strata of New Zealand history and memory and speak about who we are as inhabitants of this island ark.

In his publisher’s letter in Issue 1, Woods put it like this: “Our mission is to explore New Zealand’s wildlife and environment, our people and towns, our history and natural heritage. Our publication will celebrate the evolution of New Zealand and New Zealanders.”

That mission hasn’t changed, but times have. We have the internet for information now. The word “journal” has been dropped from the magazine’s description, not because it is any less reliable a source of knowledge, but because the emphasis is less about information, more about experience and analysis of the issues we face as New Zealanders.

That role, too, was prefigured by Woods in his first-issue letter. He promised that New Zealand Geographic would “examine the important geographical themes of our times and the global threats to our fragile web of life”. Today, one issue that looms large on an almost daily basis is land use. Production and protection seem locked in an endless struggle, and there is often a deadly discon­nect between economy and environment.

Twenty-five years ago, environmental awareness was surging. The year before New Zealand Geographic was launched, two environmental milestones were achieved: the country was declared a nuclear-free zone and the Department of Conservation was created. DOC grew out of a recognition that protection of the country’s biodiversity must be addressed head-on by a dedicated agency, rather than as a peripheral concern of other government departments.

Today, the department struggles to perform the roles it was set up to fulfil. A slashed budget cripples its effectiveness, and its commerce-friendly mission—“Conservation for pros­perity”—plays to a skewed contemporary valuation of land and water: not as identity-defining national heritage but as wealth-producing economic assets. Exploitation has the upper hand, and I fear ours is becoming­ to quote the title of a famous Colin McCahon painting—“a landscape with too few lovers”.

Midway through writing this reflection, I paid a visit to the local stream I wrote about in 2012 in “Pilgrim at Oakley Creek”. I stopped en route to admire Ngakau Mahaki, the exquisitely carved meeting house that stands on the campus at Unitec. The two great bargeboards that form the gable of the house—the maihi­ are works of art, covered not just with the spirals and whorls of traditional Maori motif, but with thousands of zeros and ones in long lines of binary code.

In the sculpted arms of Ngakau Mahaki, Maori cosmology meets the digital world. Here the infor­mation age rubs noses with the wisdom of older, more spiritually aware times, offering a clue as to how we might inhabit these islands without disgracing them.

I recently heard a kaumatua say that Maori weren’t Maori when they came to Aotearoa. “We were Polynesian,” he said. “We were about coconuts and pandanus. The land made us Maori.” The land can create in all of us the sense of identity that comes from living well in these islands. But only if we invite it. From the beginning, New Zealand Geographic sought to issue that invitation to find our place in this place. It still does.