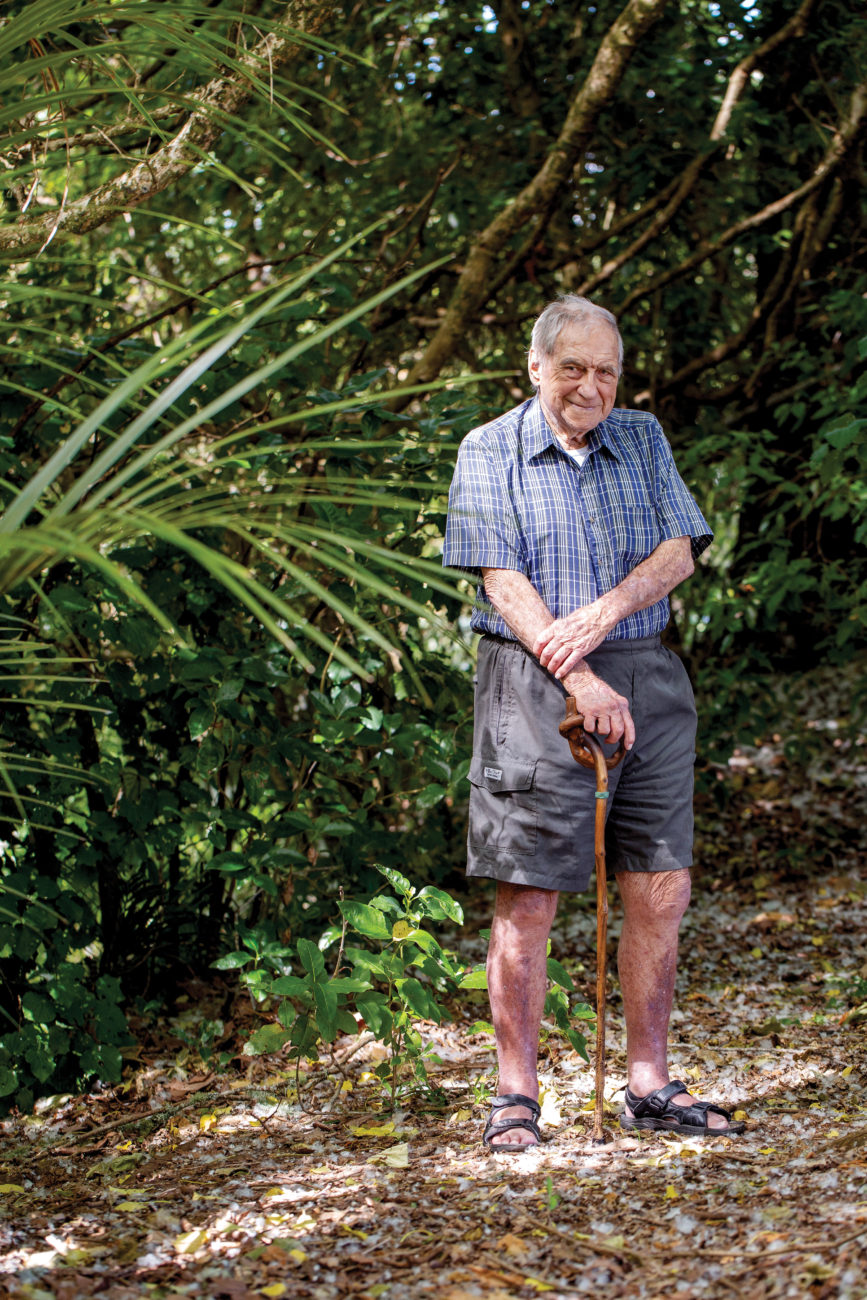 “Dear sir,” wrote Miss V. Brown of Waiheke Island, secretary of the Junior Forest and Bird Protection Society, to the Department of Internal Affairs, Wellington, in January 1960. “We find that rats from the mainland have been destroying literally thousands of different species of sea birds. We have counted some 950 petrel carcasses all killed by rats. Would it be possible for your department to supply us with free rat poison?”

The department responded. Five pounds was sent to the society for the purchase of rat poison. That small investment, plus the dedication of a group of Waiheke schoolchildren and their teacher, had an effect that is still being celebrated today.

At the heart of the story is Alistair McDonald, now in his 80s and living in a retirement village in Kamo after a life of teaching in small North Island schools.

Like his father before him, McDonald was a man of the sea. From his armchair, he looks at a framed print of a windjammer battling heavy weather, lee rail under. His own vessels were of humbler build. A 12-foot-6 open dinghy powered by a one-and-a-half-horsepower Seagull outboard motor took him most places he wanted to go. Often, that was out fishing.

With a laugh, he says he chose the school postings he applied for based on proximity to good fishing. Blackpool School, on Waiheke, was a coup in that regard. He used to ask his wife what she’d like to cook for dinner. “Crayfish and a couple of pāua,” she might say. Crayfish and a couple of pāua was what her husband would bring her. His dinghy, he says, was “always at the ready”.

That trusty dinghy also carried groups of schoolchildren to adventures on the islands that surround Waiheke. Camping on sandy beaches, fossicking in rock pools, catching and cooking dinner, beachcombing, living off the land—McDonald introduced his students to a Swiss Family Robinson experience that was on their doorstep.

The adventures were a natural extension of his own hankering to explore. With his fox terrier cross Pip, McDonald made the Hauraki Gulf islands his gateways to discovery.

It was during one of his forays around The Noises, a group of rocks and small islands a few kilometres to the north of Waiheke, that he came upon a disturbing sight: dead seabirds floating on the waves. Many showed evidence of predation. Curiosity—and Pip’s keen nose—led him to Maria Island, a breeding site for white-faced storm petrels. What he found there distressed him. “There’s no water on this island, and rats were getting liquid by biting into petrel chicks. The birds were bleeding to death.”

White-faced storm petrels—known to seafarers as Jesus Christ birds for their ability to seemingly walk on water, and as Mother Carey’s chickens—are one of the smaller petrels, about the size of a thrush.

The thought of rats quenching their thirst by drinking the blood of these birds—especially the chicks—offended McDonald.

“I loved wildlife, and I wanted that island to be a place free for the birds to live. The more I thought about it, the more I worried about it.”

He talked about what he had discovered with his students, and some of them wanted to help him do something about the problem. They formed a group, a junior division of Forest and Bird. The children fund-raised, earning one pound, which they spent on rat poison that they spread on a smaller rat-infested island off the south coast of Waiheke. It was when they felt ready to tackle the larger Maria Island that Miss Brown wrote to the government.

They also took a more direct approach to rat eradication.

“Can you handle a belaying pin?” McDonald says he asked the children. “My dog can dig them up, and you can belt them on the head when they try to run away.” He would have the children stand in a circle and whack any rat that showed itself above ground. He admits that there were probably “more laughs than deaths”, but they had an effect. “Nothing got past us,” he says.

“I wondered if I was doing the right thing,” he confides. “Rats have a right to live, too. But I felt they were getting away with murder. They were killing the birds I wanted to protect.”

Later that year, McDonald took a young Wildlife Service ranger to the island to show him what they’d been doing. That young man was Don Merton, who would become a household name in conservation circles for his innovative strategies for saving endangered birds from extinction. A few years after his first visit, Merton would confirm that rats had been eliminated from Maria Island—now called Ruapuke. It is considered one of the first successful island rat eradications in the world.

McDonald’s hope was for the Mother Carey’s chickens of Maria Island to “live on forevermore”—and they have. They breed on Maria Island to this day, along with other seabirds such as fluttering shearwaters. The island is privately owned and cared for as a nature sanctuary by the Neureuter family.

Sue Neureuter told me that, as children, she and her siblings would visit the island in the years after rats invaded and find hardly any seabird burrows. “Now, you can’t walk on the island without your feet breaking through the surface into a petrel burrow,” she says.