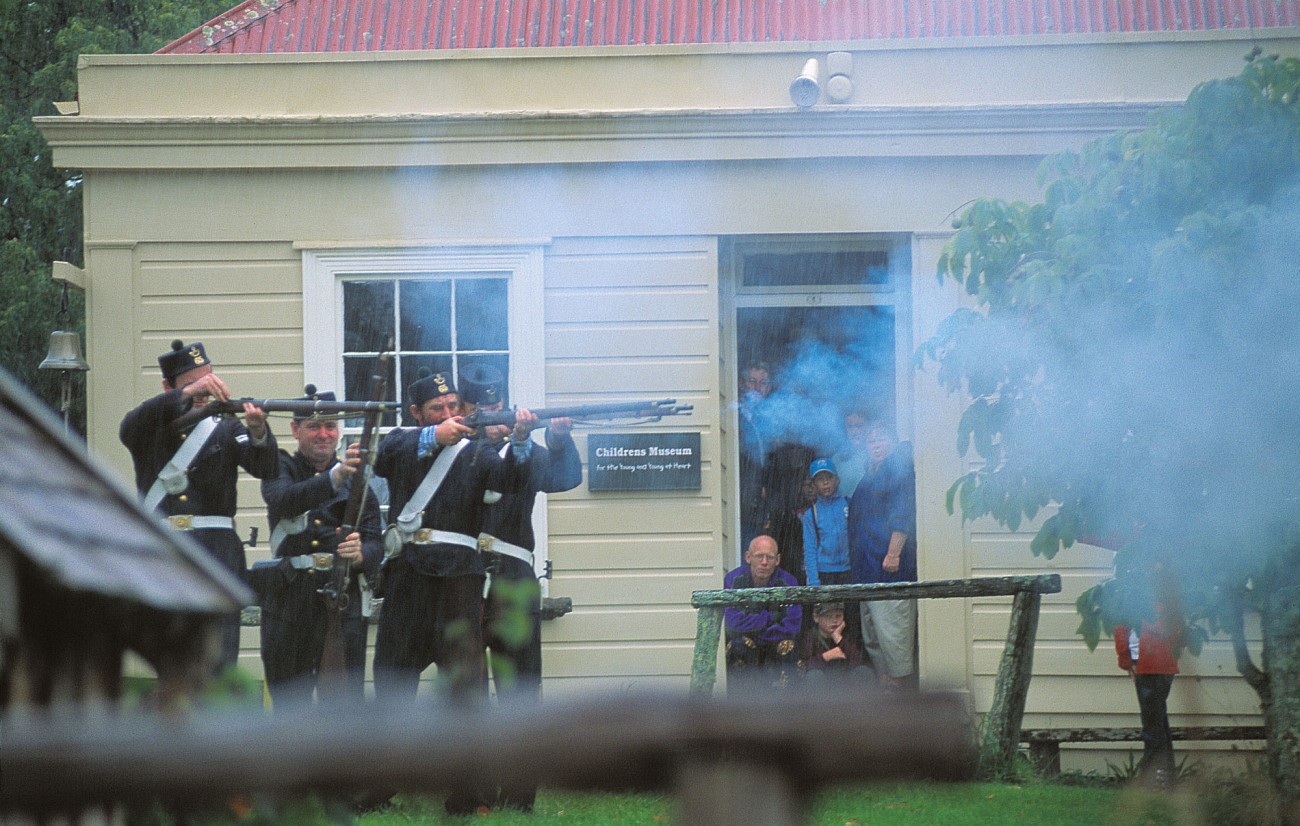 The methodist minister is declaiming before his fold—“We think of those in England, Scotland and, yes, even in Ireland, who sing the same hymns as we on this Easter Sunday. . .” —when suddenly, at our backs, there is the scuff of coarse fabric and a clatter of boots on the wooden floor. Three Red Jackets bustle in with a mumbled apology for their tardiness and find bench space among the congregation.

The minister, recovering his composure after this interruption by the military, picks up the threads of his sermon. “Some of you follow the English practice of bathing once a month.” He allows a smile. “Take soap and lather as you swim. There is no need to behave as Englishmen in this free land.” Heads nod. My eyes wander to a plaque fixed to a wall of the small clapboard church in memory of imperial soldiers who lost their lives in the “Maori Wars” and who now lie in the Howick cemetery. There are 29 names emblazoned in gold.

The church, or “conventicler,” as dis­approving Anglicans called the dissenters’ meeting house, was erected on a windswept ridge in the Auckland seaside village of Howick in 1852, little more than a decade after the country had been claimed as a British colony. When attendance slumped in the 1860s, the church was rescued for the faith by a determined group of Methodists, who shifted it to a farm in nearby Pakuranga. In 1977 it was gifted to the Howick Historical Society, which moved its well-travelled timbers yet again, this time to a picturesque picket-fenced site in a corner of Howick Historical Village. Here, alongside barn, schoolhouse, creamery and cottages, it is living out a useful working retirement in what has been called New Zealand’s finest living museum.

After the service, I step out along the pebbled path amid a dazzle of uniforms and the scent of wood smoke in search of Alan La Roche, the director of this time-warp project. I find him in Sergeant Michael Ford’s cottage, talking to a tight knot of visitors. He seems to have heeded the minister’s words, for he is busy demonstrating the arcane science of soap-making.Try adding carrot or beetroot for colour, he suggests, but avoid using anything containing alcohol—it ruins the soap.

Once he has done with formulas and ingredients, and having delivered a stirring dissertation on fragrances, the felt-hatted, bespectacled artisan gives me a rundown on the village and the thinking behind it. Based on the fencible settlement of old Howick (1847–80), just a hill or two away, the village is home to 33 historic buildings, most of which have been relocat­ed from places hereabouts. Among them is the cottage of colonel De Quincey, son of the famous English  essayist, and the Howick courthouse (1851), thought to be the country’s oldest administrative building.

“We try hard to present an authentic experience,” says La Roche, who became committed to the idea of a living museum after making a Winston Churchill Fellowship tour of similar museums in North America. “There is no plastic here whatever, and no concrete.”

There’s an artisan who fashions clay pipes. Others regularly make candles. Fruit and vegetables of the period are everywhere to be seen, growing in village gardens, decorating kitchen bowls or hanging to dry. Some members raise heritage crops. La Roche himself is active in various seed-saving organisations.

On the third Sunday of every month the village holds a “live” day in which upwards of 60 or 70 colonials dress and act the part, striding out in starched aprons among ducks and geese or parading on the green sward before letting off a crackle of musket fire.It is not hard to loose the fetters of the 21st century here and slip into an era which seems at once more solid, more physical and more exhilarating than much of our technology-mediated present.

I come across Marian Cartwright, who is sweeping the entrance to a sod cottage with a brushwood broom. A settler herself, she came out from England in 1963, her father having signed up to a £10 immigration scheme. The sod cottages of a century earlier were built in just three days for the same price, the clays of Howick proving ideal for the job. All that was needed, says Cartwright, was a penknife, an axe, a spade and a will to work. The prized window glass came out from the old country with the colonists, packed in sawdust.

Earlier in the day the drenching everything that moved and sending rivulets across the paths. The walls of the “soddie,” however, were bone dry, lending weight to the old Irish maxim that all a cottage needs is “a good hat and a good pair of shoes”—a waterproof roof and solid foundations, in other words.Reflecting the museum’s attention to detail, even the nearby plants are authentic, the snowdrops, arum lilies and fuchsia all coming from historic sod cottages in the district.

Sidestepping a horse and buggy, I amble along a lane of modest buildings, poking my head in at James White’s general store and post office. Here, fencible women once bartered home-grown produce for the sugar,flour and tea that brought a veneer of refinement to makeshift old Howick.Inside, two or three capable bonneted women are baking soda bread at a blazing hearth. Next door,through a narrow doorway, Brenda Scott, great-great­granddaughter of James White, is manning the counter. At her back are shelves laden with utensils and crockery, jars, lamps and cakes of butter bearing the marks of local suppliers. The counter holds jars of sweets. A pheasant hangs from the ceiling. In the best pioneer­ing spirit, the walls are cov­ered with old newspapers.

“There were no fridges, so no ice cream. And no computers,” Scott is telling some children who have fetched up in the store.“No computer games?” asks one boy with something approaching disbelief. “No, but I can show you better things,” says Scott, brandishing a candle and explaining that each one is painstakingly built up by being dipped in fat 100 times or more.“Do you think there would have been time for computer games even if they’d had them?” asks the child’s mother with a relish that hints of long-smouldering disapproval.

Out back is a thatched raupo hut similar to that belonging to Ngamapu, a mail runner who delivered mail between Howick and Auckland twice a week. Interesting to learn is that, unlike most local Maori, who could read and write thanks to zealous missionaries, many fencibles could not put pen to paper—given which Ngamapu’s burden may have been light.

Down in a gully beyond a pond is a military encamp­ment consisting of a few stands of arms and half a “No, but I can show you better things,” says Scott, brandishing a candle and explaining that each one is painstakingly built up by being dipped in fat 100 times or more.“Do you think there would have been time for computer games even if they’d had them?” asks the child’s mother with a relish that hints of long-smouldering disapproval.

Out back is a thatched raupo hut similar to that belonging to Ngamapu, a mail runner who delivered mail between Howick and Auckland twice a week. Interesting to learn is that, unlike most local Maori, who could read and write thanks to zealous missionaries, many fencibles could not put pen to paper—given which Ngamapu’s burden may have been light.

Down in a gully beyond a pond is a military encamp­ment consisting of a few stands of arms and half a ever, it undoubtedly was—a money-saving exercise. In response to Governor George Grey’s requests for more imperial troops in the troubled 1840s, the secretary of state for the colonies, Earl Grey (later Lord Howick), hit on the idea of sending retired soldiers who could lay down the plough and dust off a rifled musket at the first stirrings of Maori hostility.

Howick and three other fencible settlements were established as a shield across the southern approaches to Auckland. These outposts were peopled with some 2500 men, women and chil­dren who took up the offer of free passage, land and buildings in return for regu­lar church-parade duty and military action as required over a seven-year term.Some did well, one starting the Howick Arms hotel in the front room of his half of a double-unit cottage. Others ran into trouble. Several had land confiscated for not show­ing up at church. An Irish sergeant was reprimanded for publishing an outspoken newspaper, later banned for its criticism of the government.

The vibrant history of the fencibles and their Maori neighbours is very much alive at the village, and as I head for Elizabeth White’s homestead and a 21st-cen­tury latté, I hear again the words of the minister: “Your children’s children’s children will live among thousands of people, for the world will hear of Howick, of its fish and its green fields . . .”