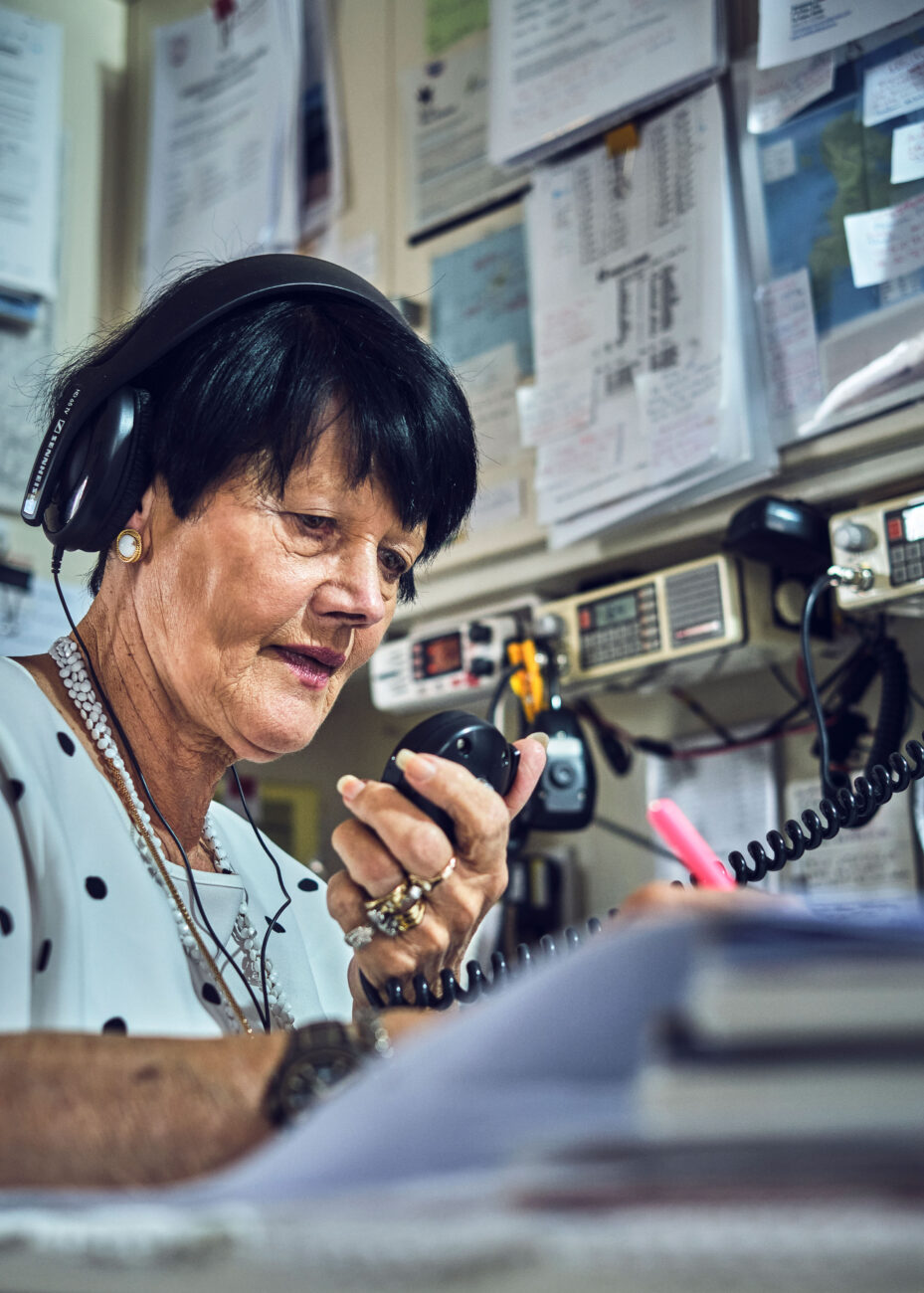 There’s not much left at Puysegur Point, the south-western-most tip of New Zealand, where a tiny settlement once held on against the thrust of the wind. Concrete foundations, a squat lighthouse, a shed—and a radio repeater, casting a wide, invisible net across the waters of the south.

It’s one of many repeaters in the lower South Island. In places like Dusky Sound, Resolution Island, Te Anau, and Manapouri, they catch and strengthen the calls and chatter of boaties and crayfishers and tourist vessels, passing their voices across the land and water until it all condenses in the air above Meri Leask’s house on Bluff’s Marine Parade and surges down the bristling antennas on her roof and into the home-built radio bank parked on her kitchen bench.

As the operator of Bluff Marine Radio, Leask has single-handedly presided over this set-up pretty much every night and day of the past 40 years, monitoring water traffic in Fiordland, the Chatham Islands, Rakiura/Stewart Island, the subantarctic islands, and northern New Zealand, even to Fiji. She’s there for kayakers, fishers, recreational boaties, international sailors, and for tragedies like the sinking of the Easy Rider in Foveaux Strait in 2012, in which eight people drowned.

She’s done the job for free since the Bluff Coastal Station closed down in 1980 and a group of commercial fishers asked if she’d take it on. With her husband, Ian Leask, who died in 2017, she’d been an experienced crayfisher in the local waters, “and they obviously thought that I would know where they were and what they were doing”, she says. “Or at least I hope they did.

“I thought, ‘Oh my goodness’, because I had two young children at the time, one crawling along the floor and the other toddling along behind it. But anyway, I did, and it just has never stopped growing.”

She and her husband set up the equipment in the kitchen, where she had a view of the living room, so she could field calls while keeping an eye on their children. From the living room, she can see the marine traffic from dawn to dusk to dawn as people chunter in and out of the bay, travelling or fishing or just enjoying the waters of Foveaux Strait and beyond.

Today, she’s known as the “Voice of Bluff” and “Good as Gold Meri”, thanks to her signature signoff. She’s an absolute stickler for process, safety, and communication, all the necessary hallmarks of life learned at sea, and answers up to 160 calls a day, depending on the weather.

Every morning, the first thing she does is check the MetService weather report, which arrives in her inbox at 6.30am, though she won’t reveal what time she actually gets up.

“I’m too canny for that. The guys don’t need to know or they’ll be ringing up.”

Everything is logged in a notebook. The commercial fishers text if they go out in the middle of the night, and she’ll pick it up in the morning and check in with them later in the day. Because she’s often the first point of contact for people in trouble, she’ll take her cellphone and a handheld VHF everywhere she goes—to the supermarket (sometimes abandoning her groceries to take a call), to run errands, to her other volunteer jobs.

“I’m always contactable. I would hate to think I was out and somebody needed help and I didn’t have it on me.”

Every day, for 40 years. Well, nearly. Occasionally, she’ll leave her post to visit family in Australia.

She’s been involved in hundreds of incidents. Sometimes, an emergency locator beacon goes off on a boat, and then she’s flat out coordinating with rescue services and other vessels and Invercargill police.

If it’s a big job, she’ll drive to Invercargill and operate from the Don Street station.

Leask was made a member of the New Zealand Order of Merit in 2006, an honour she calls “absolutely unbelievable”.

Leask volunteers for several organisations, but says she loves this job in particular.

“I like to think that everybody comes home and they’re safe and well. I’m glad to be there for them.”