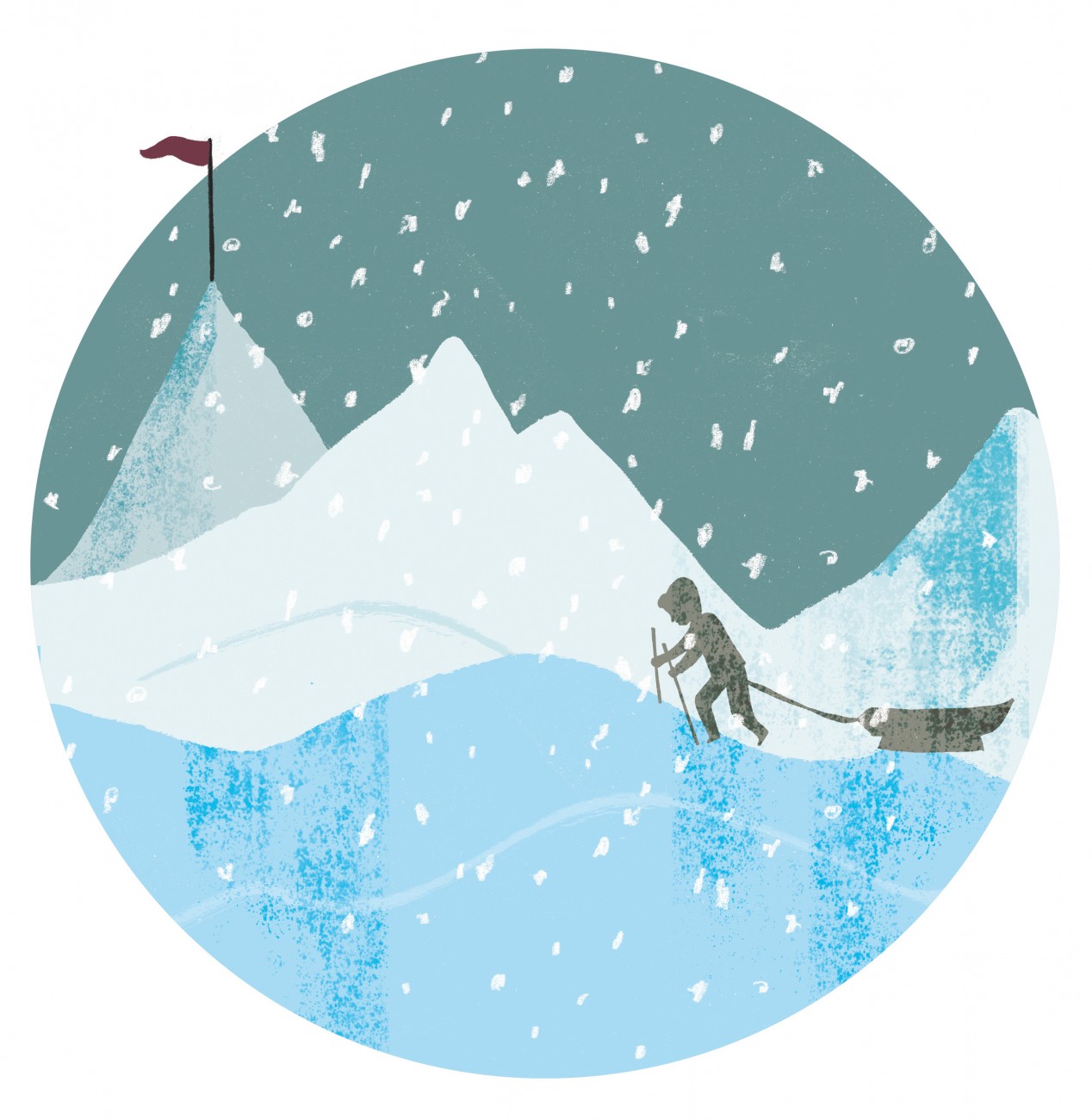 Fifty kilometres was all Henry Worsley had left to cover in his solo walk across Antarctica. Fifty kilometres in a journey of 1500 kilometres through blizzards, white-outs and the monotony of never-ending snowpack.

But he couldn’t go on—he physically couldn’t slide one ski ahead of the other, he said in a laboured, rasping message on his satellite telephone on the 71st day of the trek. Despite being almost within sight of his destination, the 55-year-old retired soldier had “shot his bolt”, he said, using the words of his hero Ernest Shackleton, whose attempted crossing of the frozen continent 100 years ago had been the catalyst for Worsley’s own quest: to make the first solo, unsupported and unassisted traverse of Antarctica.

Sadly, Worsley left it fractionally too late to pull the plug. By the time a rescue aircraft had delivered him to a Chilean hospital, the shutting down of his vital processes had begun. He died of “complete organ failure”, brought on by bacterial peritonitis, said his wife, Joanna.

So near, yet so far—a cliché, because in human endeavours it is so often the case. To have something seemingly within our grasp, but then to lose it, seems a universal disappointment. In cases of extreme exertion or adventure, failure on the cusp of success is perhaps not surprising. At the end of a limit-pushing journey, body and mind are at their most debilitated, having been stretched to breaking point. Worsley lost more than 20 kilograms in the course of hauling his sledge across the ice for more than two months. His body had nothing left to give.

But more than that, he had simply run out of time. An expedition of this sort—alone, unassisted, unsupported—relies on a precise arithmetic of kilometres of distance covered relative to kilograms of food carried. Worsley estimated that the journey would take him 75 days and he packed 80 days’ worth of food. But forced stoppages due to weather whittled his supplies to the point where he had only 70 walking days’ worth. By day 71, it became an impossible task to shorten his rations and still have the energy needed to travel the last 50 kilometres.

When I heard of Henry Worsley’s death, so near to his destination, I thought of trans-Tasman kayaker Andrew McAuley, who in 2007 paddled roughly the same distance that Worsley walked, only to come to grief a mere 30 kilometres off the coast of Fiordland. His kayak was recovered, but McAuley was never found.

I thought of Scott Donaldson, another trans-Tasman kayaker, who in 2014 ditched within sight of the Taranaki coast after being pummelled in a storm. And there are a legion of mountaineers who have turned back within striking distance of a summit because they had reached their predetermined turn-around times, or because conditions had rapidly deteriorated, or they themselves had “shot their bolt”.

But then on the other side of the ledger are those who, against all odds, succeed and survive. Not least, Worsley’s own relative, Akaroa-born Frank Worsley, whose near-miraculous navigation and seamanship in sailing a lifeboat to South Georgia saved the lives of Shackleton and his crew on the very expedition Henry was replicating. Or there was the Australian geologist and Antarctic explorer Douglas Mawson, who made a death-defying solo return journey from a sledging expedition in 1913, the year before Shackleton set out on his quest.

In the wake of Henry Worsley’s death, comment has been made, and questions asked, about his decision to eschew technical advantages, such as a kite to make use of the Antarctic’s strong winds to pull his 150-kilogram sledge—an asset used by Norwegian adventurer Børge Ousland, who made the first Antarctic solo traverse in 1997. Ousland’s journey, though unsupported (in that there were no food or fuel caches laid along the route), was not technically ‘unassisted’; the kite assisted him.

On the other hand, Worsley had a GPS receiver to confirm his location at any time. He had a satellite phone, with which he was able to conduct media interviews, upload photographs to a blog and, in the final instance, call for a rescue. Was this ‘assistance’? And if so, is this the future of adventure—ever more precise and pedantic characterisations of the journey being undertaken, to classify it against a check list of criteria?

Worsley’s hero, it should be noted, happily embraced assistance and support. In his trans-Antarctic attempt, Shackleton chartered a second ship and crew to lay a chain of supply caches back from the Ross Sea to the Pole—the second half of the proposed crossing. Shackleton himself had two motorised sleds and 69 sled dogs with him on Endurance. But none of it helped him. He and the Endurance crew didn’t even set foot on land. The ship became inextricably trapped in pack ice off the Antarctic Peninsula and was eventually crushed.

Each adventurer brings his or her own terms of engagement to the task, and it is pointless to compare or somehow rank them in order of merit―supported/unsupported, in company/alone.

Why did Henry Worsley choose the most arduous mode of polar travel—known in Scott and Shackleton’s time as ‘manhauling’—and why did he go it alone? In part (as he said in interviews conducted en route) because he had already completed two Antarctic expeditions as leader of a team, and wanted to test himself in that landscape as an individual. But perhaps also because he was raising money for the Endeavour Fund, a charity that helps wounded, injured and sick British servicemen and women by encouraging and funding physical challenge. Worsley may have wanted to set himself a personal challenge worthy of the cause.

In that aspiration he succeeded: his expedition inspired donations in excess of £100,000 ($220,000). And he came tantalisingly close to completing the task. Better luck with the weather and he would have made it. In the end, though, he had to announce to the world that “a gradual grinding down of my physical endurance finally took its toll, and it is with sadness that I report it is journey’s end—so close to my goal”.

Was Henry Worsley a lunatic, as has been suggested, for attempting such a feat without availing himself of all ‘modern advantages’?

I asked Aat Vervoorn, a Nelson-based mountaineer and historian who has written two books based on his many solo climbs in the Southern Alps—accounts not just of alpine exploits but of ways of understanding the human relationship to wilderness. What would Frank Worsley have made of his relative’s journey, and its outcome, I asked.

“Frank would feel sorry that Henry died—especially when he had almost reached his goal,” Vervoorn replied. “But he certainly would not think Henry had thrown his life away for nothing. Rather, Frank would have thanked Henry for understanding what it was all about and why it mattered—not in terms of nationalism or imperialism, but personally, experientially.”

In his book Mountain Solitudes, Vervoorn describes that motivation as “the business of reaching into ourselves by reaching beyond ourselves, and sharing what we find with others”. Surely this was what Henry Worsley was doing on the ice, and doing it in a way that was plausible, given his experience, and worthy both in its fundraising dimension and its personal meaning.

Roald Amundsen, the nonchalant Norwegian who made polar travel look so easy, said of Shackleton’s failed trans-Antarctic expedition, “Do not let it be said that Shackleton has failed… No man fails who sets an example of high courage, of unbroken resolution, of unshrinking endurance.”

By those measures, Henry Worsley is to be admired and his embrace of challenge emulated, for it is the heart of true adventure.