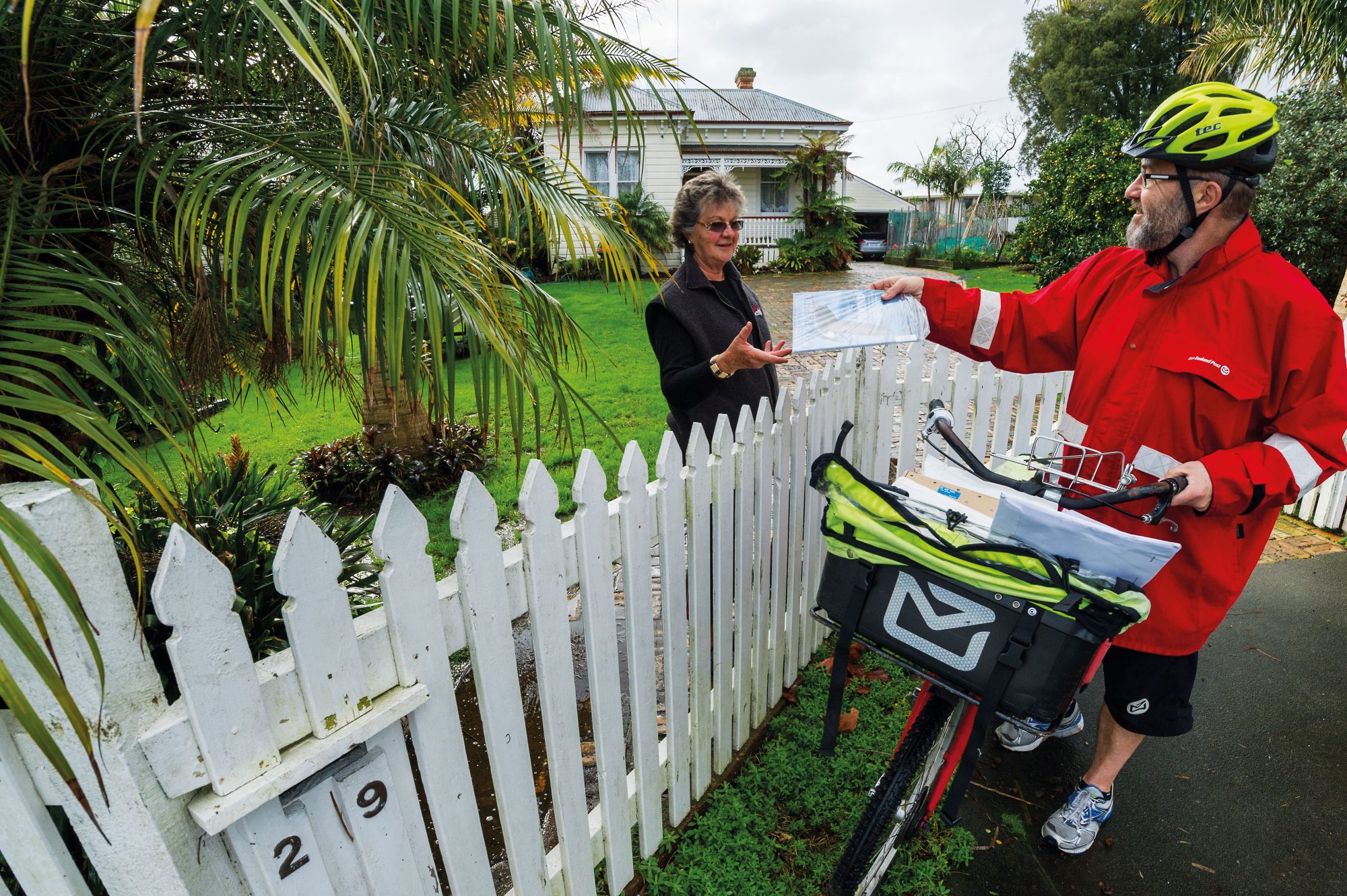 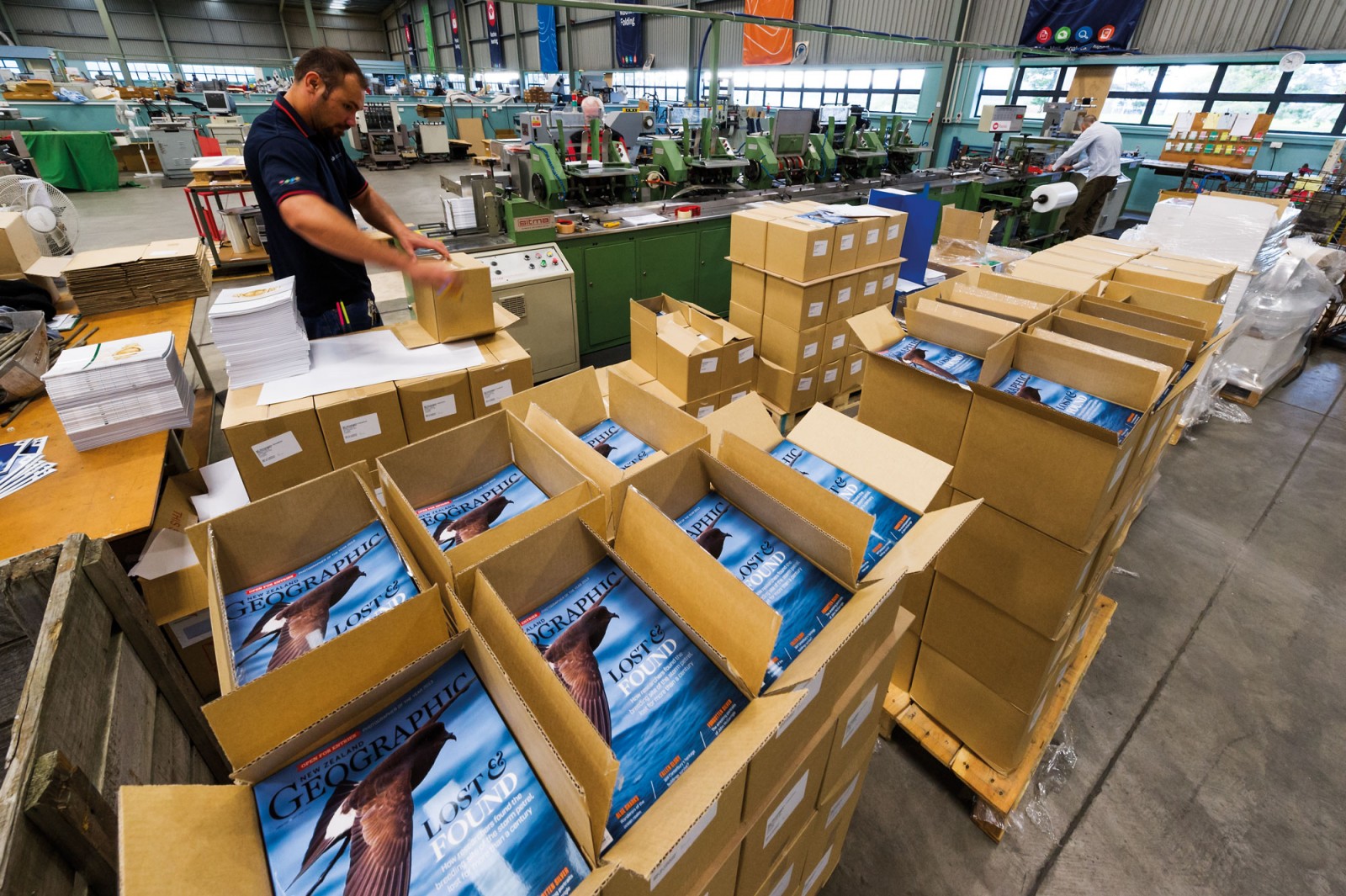 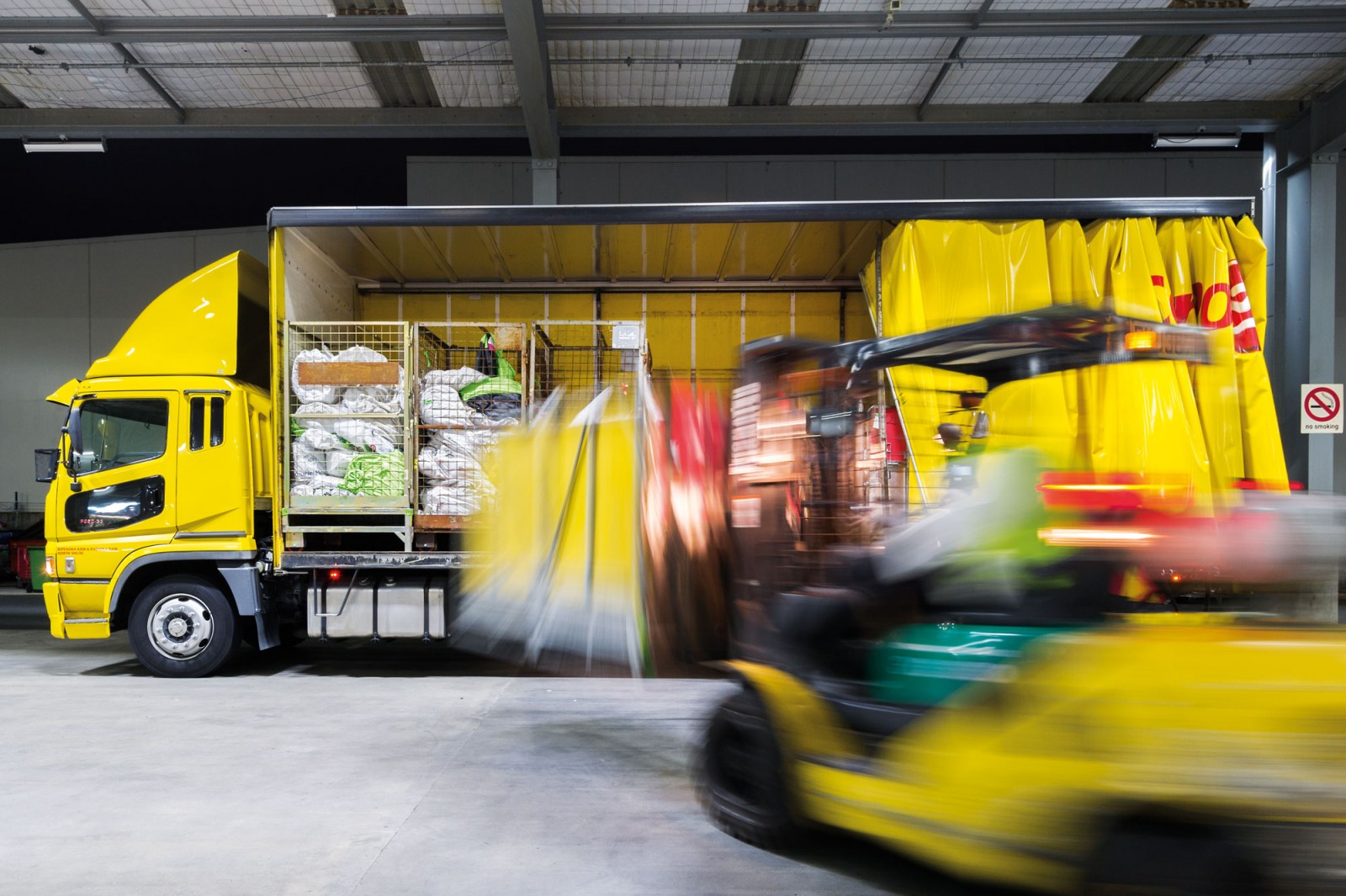 There’s something magical about the arrival of the mail. And yet what happens between distant letterboxes is anything but magic. A finely balanced network of some 4000 people, ware­houses of processing equipment, and a formidable transport infra­structure can convey an item clear across the country by bicycle, truck and plane in a single day, for as little as 70 cents.

At any given moment, around two million parcels and enve­lopes are in the hands of New Zealand Post—being scanned, pro­cessed, flown, ferried, driven and pedalled toward the 1.9 million addresses in the postal network. Some 835 million items are deliv­ered in this way over the course of a year.

But mail has changed. The advent of electronic mail has reduced letter-writing to a quaint cultural relic—akin to putting out money for the milkman—and the organisation has been forced to change too. Once a sprawling government department that dealt with telecommunications as well as post and banking, New Zealand Post survived corporatisation in 1987, and deregulation under the Postal Services Act in 1998 that required postal operators to adhere to ‘universal service obligations’ including delivery to 95 per cent of New Zealand addresses six days a week. As mail volumes continue to fall—down 24 per cent in the past decade—the organisation, while retaining an across-the-week delivery network, has proposed reducing standard letter deliveries to three days. Despite the 39 million items processed every year by New Zealand Post’s three courier brands, the growth in parcel volumes created by online shopping and auctions has done little to alter the rapidly changing habits of Kiwis, who are expected to send 25 per cent less mail hither and yon in the next five years.

And in a rugged archipelago like New Zealand, hither and yon can still be difficult to get to. In the same way that urban postal deliveries are being streamlined by mathe­matically modelling the 2500 daily postal walks, the many and various nodes and modes of transport in the regions and islands are required to work around geographical obstacles, even weather systems.

We followed the last issue of New Zealand Geographic to one of the farthest-flung subscribers in New Zealand, Pitt Island School—total roll, six students—on Pitt Island in the Chathams. But even on the day of delivery, photographer Jason Hosking didn’t know if he would be taking a flight or a fishing boat to the island, so isolated is it and so unpredictable the weather. To addresses such as this, where internet connections are often slow and expensive and mobile networks unavail­able, the post is a crucial social lifeline.

But to any of us, receiving mail remains a very personal joy, a small artefact of one place and one person to another. An inky post­mark, a curled stamp, a scrawled address,and a tiny triumph over geography.

The Auckland Mail Centre is a nexus of the mail network for the upper North Island. Incoming mail is sorted by ‘line’—the first digit of the postcode. Line 1 items are consigned to the mail sorting room for Auckland and broken into regions by postcode for sorting into postal trays (below), while other lines are moved on pallets for line haul or air service to other mail centres around the country. (The Chatham Islands share Christchurch’s line ‘8’, but are despatched by air from Auckland, Wellington or Christchurch depending upon the next scheduled flight.) 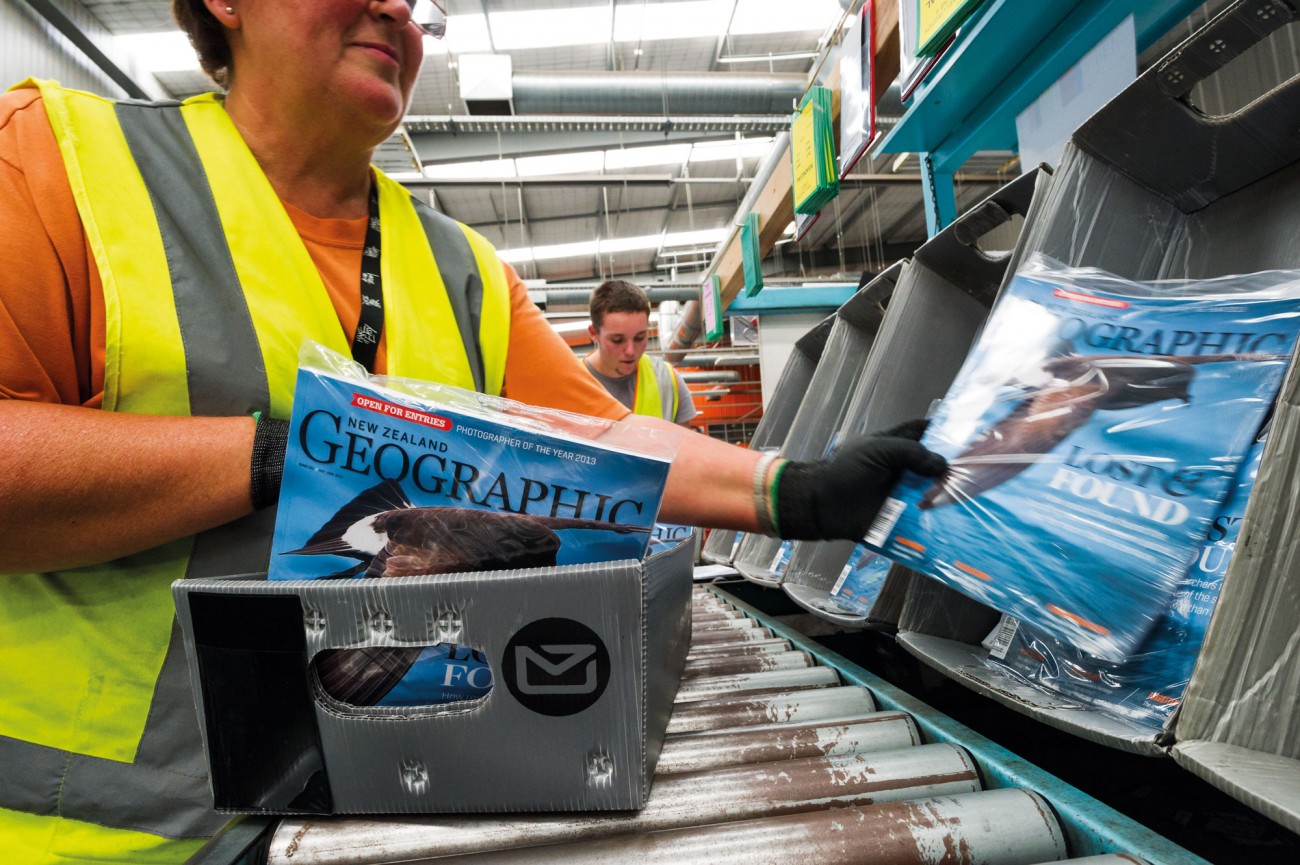 Mail flows in and out of the facility 24 hours a day, seven days a week—no sooner has the last truck been despatched in the small hours of the morning than the rigs from out of town begin arriving with inbound mail to sort and despatch. Local mail and post from other centres—nearly three million items—flow through the mail centre every day, where they are handled by more than 300 staff who consign millions of items to millions of addresses. 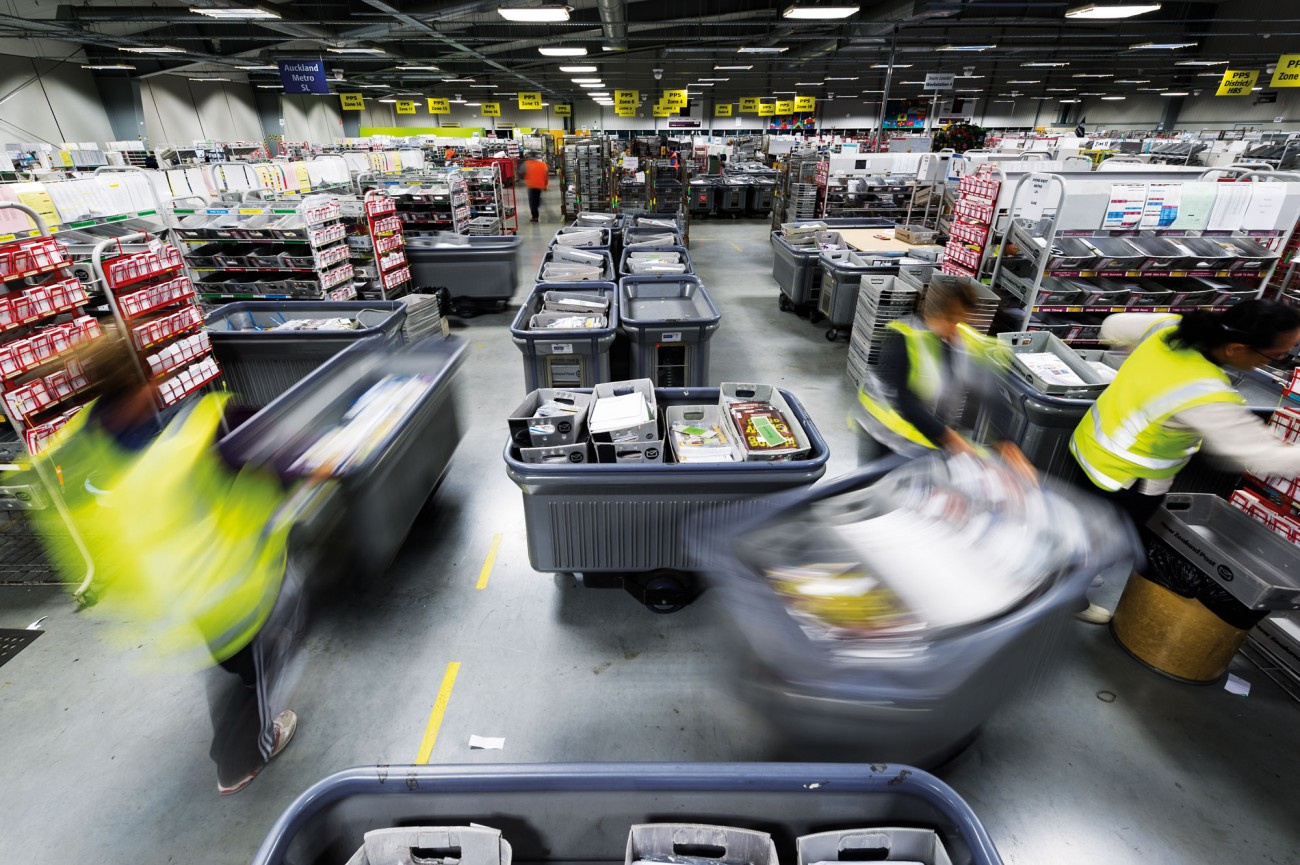 Air Chathams operates a fleet of three Convair aircraft flying from each of Auckland, Wellington and Christchurch airports once a week to Tuuta Airport on Chatham Island. Mailbags share the hold with everything coming on and off the island—outgoing mail typically sits atop crates of blue cod, pictured. 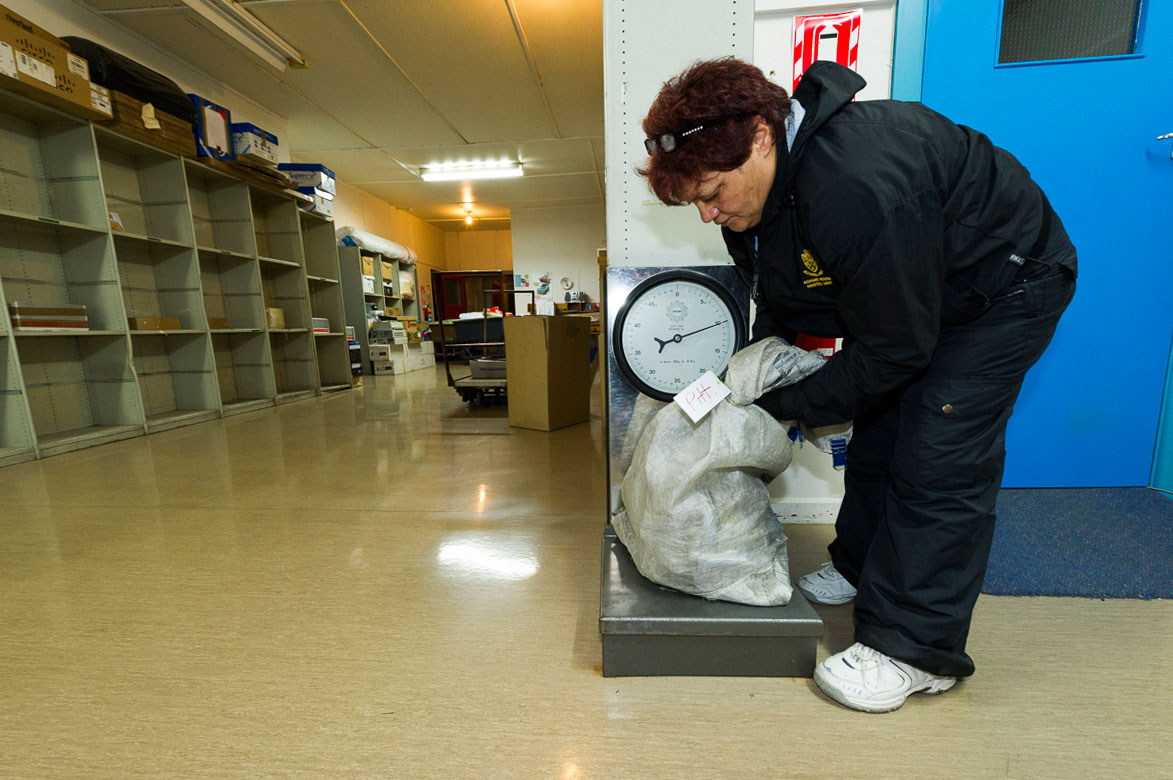 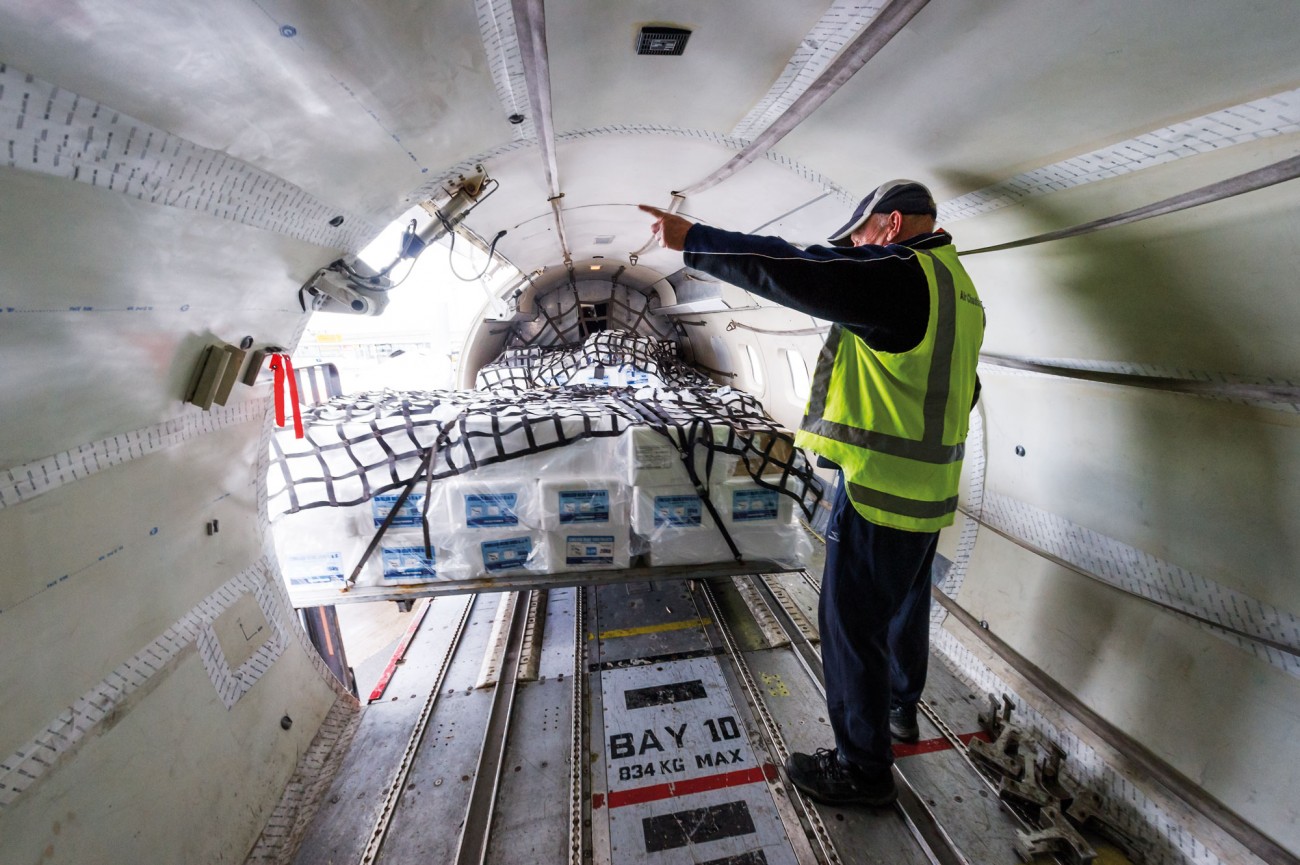 The ANZ Bank branch in Waitangi, Chatham Island, doubles as a postal delivery centre. There’s few items of island business that escape the postmistress, Judeen Whaitiri, who this day arranged her duties around the celebration of her 20th year with ANZ, though she has been handling Chatham Island’s post for 32 years and has seen all manner of goods posted back and forth: tractor parts, tyres, vehicle bumpers, flat screen televisions, even stores including frozen turkeys and Christmas hams. However the mailbag for Pitt Island represents a peculiar and perennial problem. Pitt Island lies 20 kilometres southwest of Chatham Island across Pitt Strait, a roiling stretch of sea with particularly uncompromising weather.

On days that a plane isn’t chartered—there are no scheduled flights to Pitt Island—fishing boats can carry the post, which works out to be about two times in five. (Last year the island relied upon boats for postal delivery for 11 months while the plane was out of commission.) Both fishing boats and the plane run frequently in summer, but in winter, when the grass strip on Pitt Island gets boggy and the strait is streaked with wind-blown spume, it may be a week—even two—before the mailbag can get through. 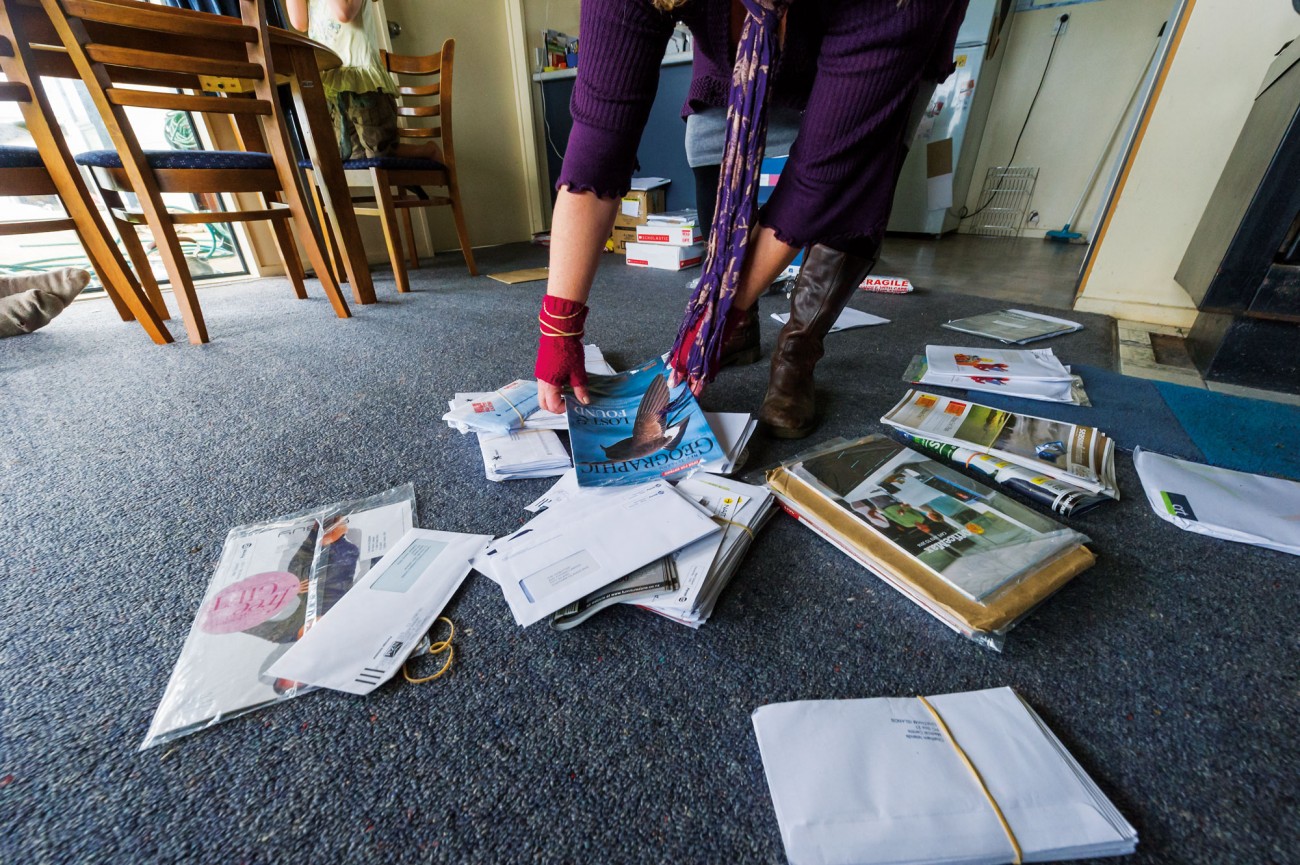 “If somebody knows someone going by boat or plane they’ll let us know,” says Judeen Whaitiri. “Everyone’s pretty aware of getting the post through.”

Pitt Island postie Karis Smith collaborates with Whaitiri to arrange the delivery. Whether she heads for the beach or the airstrip, it’s in the company of her daughter Peace, who runs ahead of the quad bike to open gates. Returning home, Smith sorts the mail on the lounge floor before putting in a call to neighbours who have received mail­­—and who can exchange it for their outgoing mail bound for “New Zealand”. 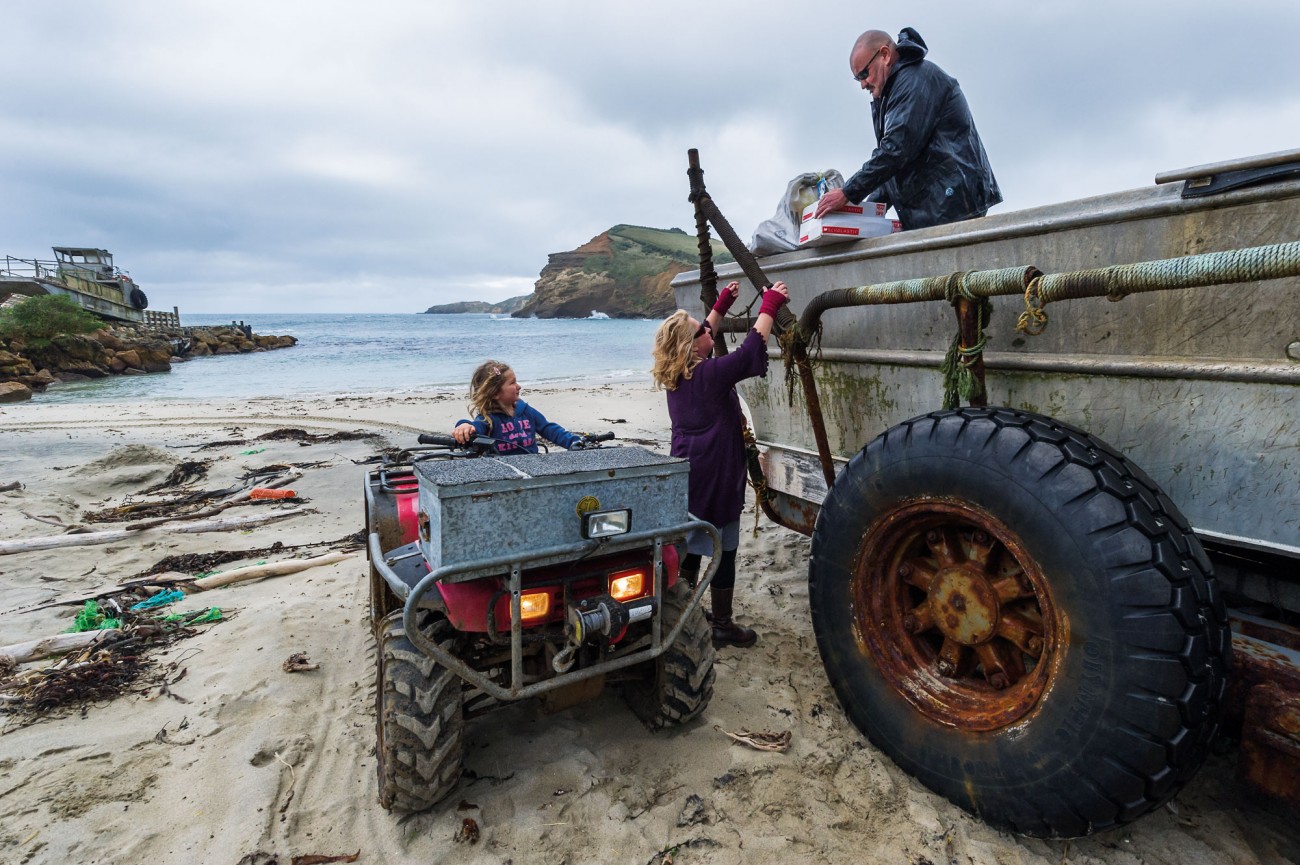 “People are very reliant on the post,” says Smith. “There’s no shop on the island, so most people shop online and everything is brought in, from washing powder to big plastic oil drums.” 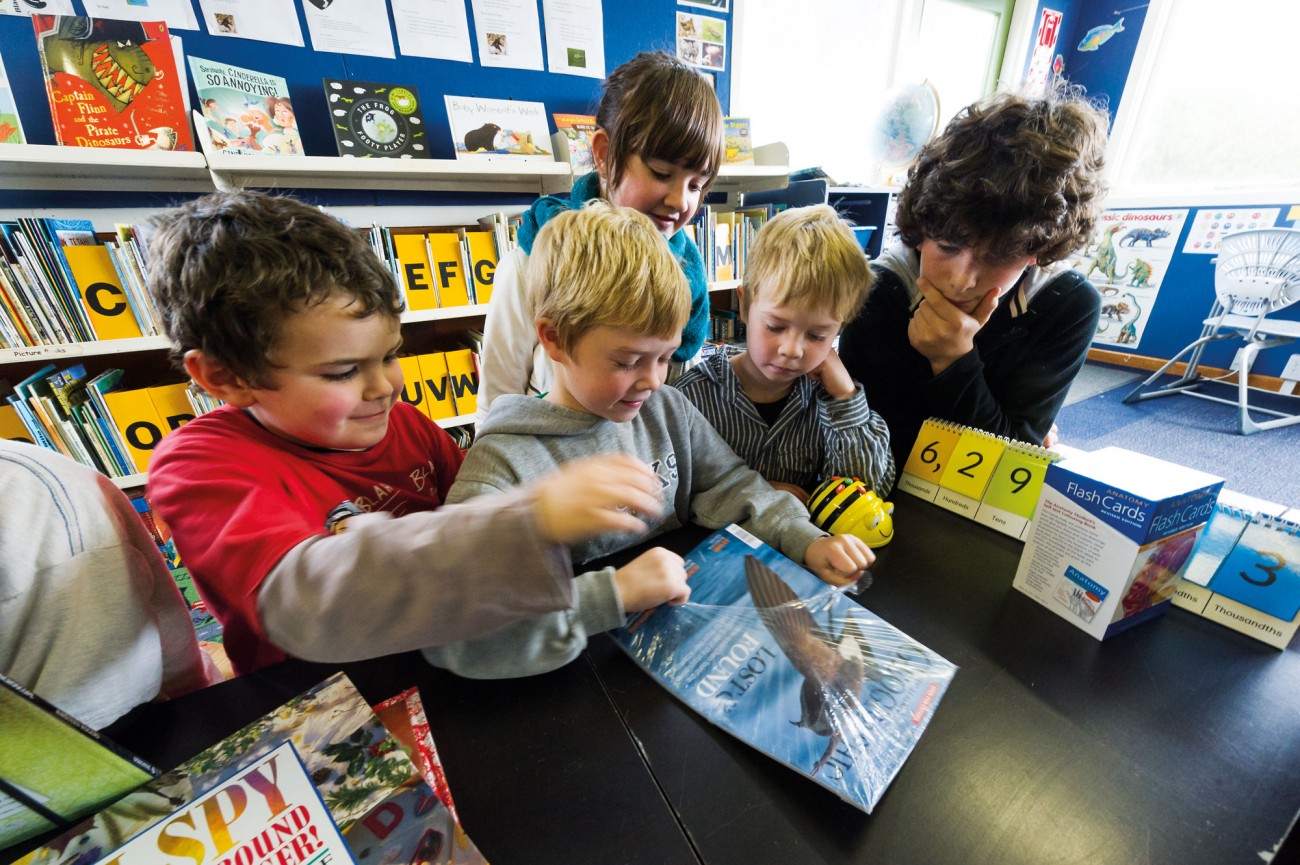 Like all New Zealanders, they have embraced the “international and instant” quality of broadband internet, says principal Philip Graydon—whose three children make up half of the school roll. In some ways it has made up for the isolation of the remote island and irregular mail, though it can’t replace the arrival of tangible items such as care packages from grandparents in Greymouth, personal letters, or magazines.

Together they work their way through the latest copy of New Zealand Geographic, more than 1000 kilometres away from where the magazine was printed. Over three days, it passed through dozens of hands, and a network that included trucks, planes, boats and quad bikes to arrive in New Zealand’s most remote school…for a total cost of just 60 cents. 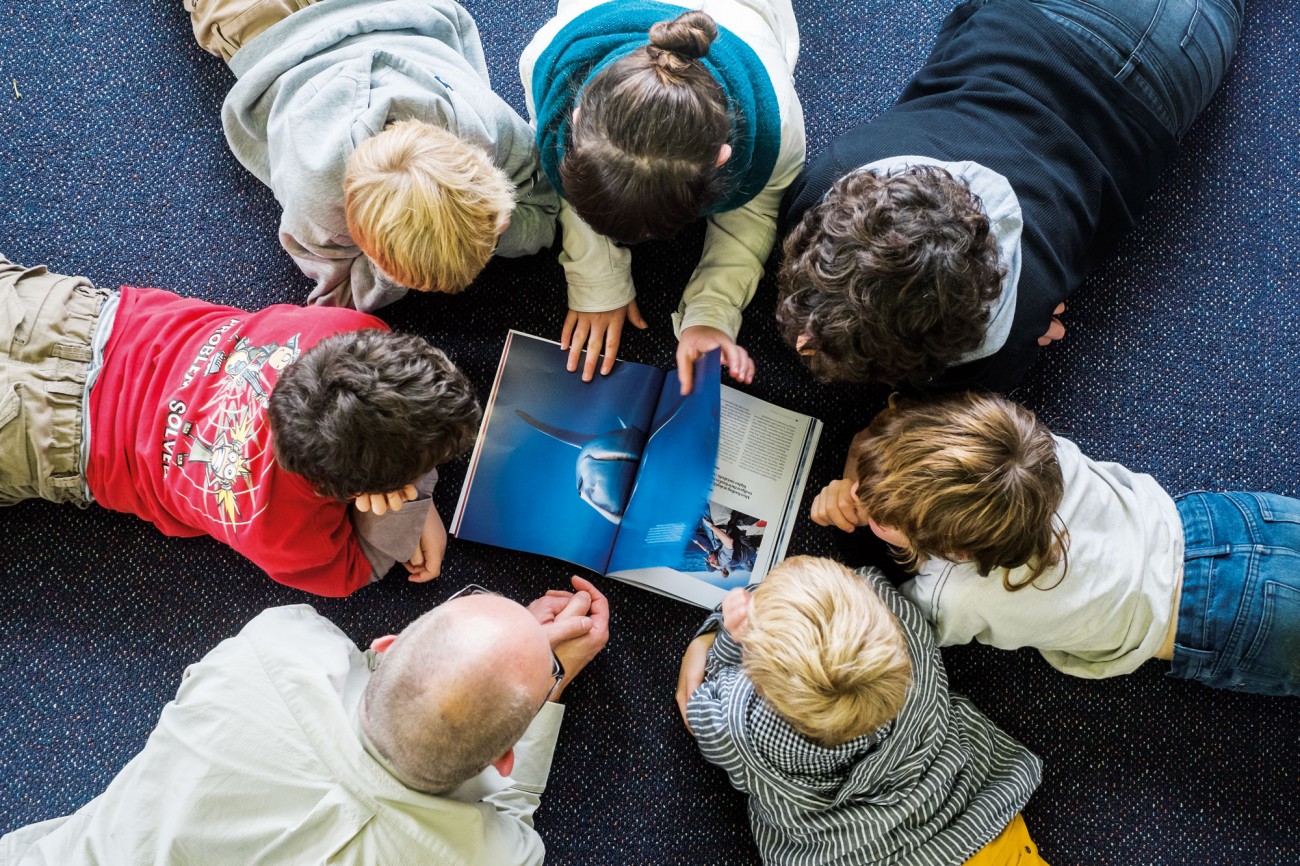 “It’s incredibly beneficial for kids to see what life is like beyond Pitt Island,” says Graydon. “It helps broaden their horizon and connect them with New Zealand, and New Zealanders.”

Up from the sands of time