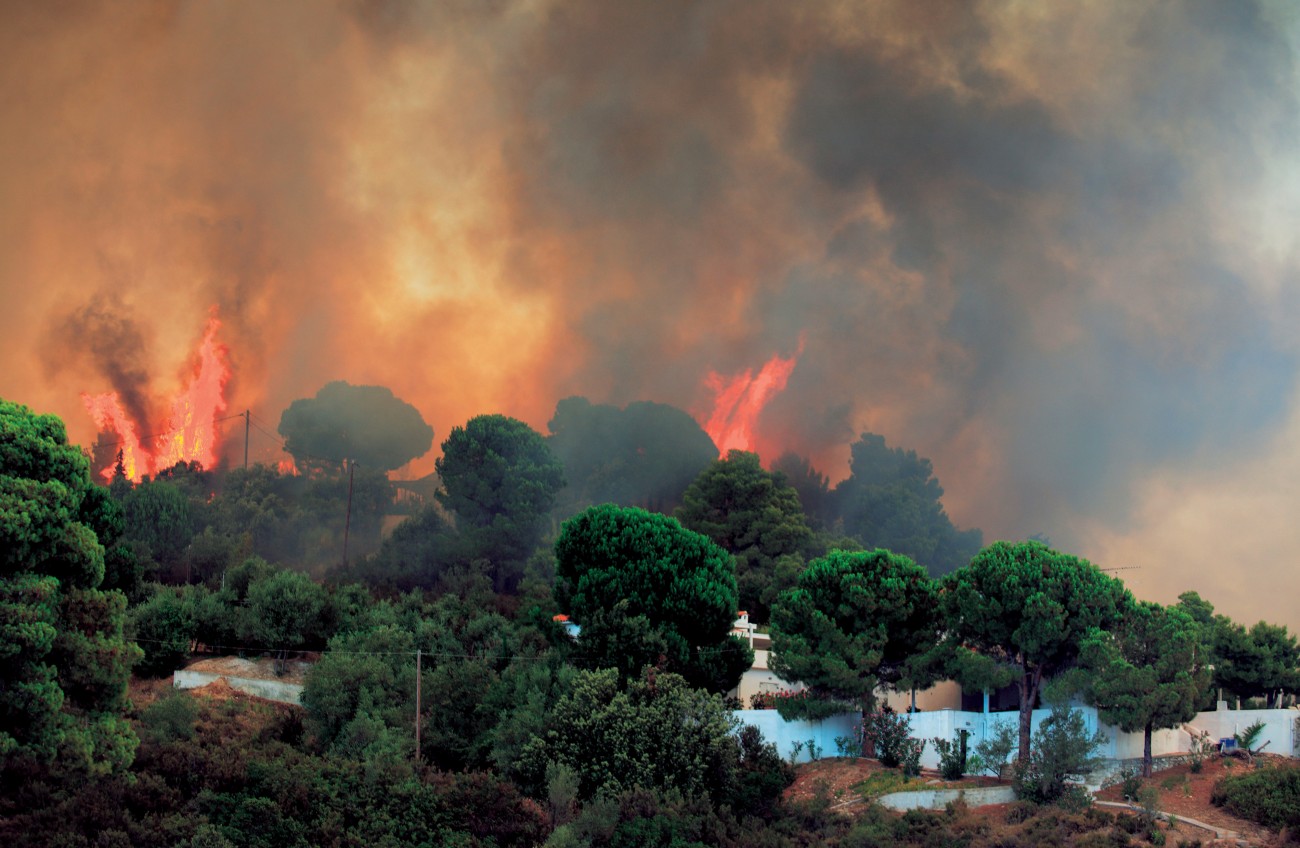 Among the expected consequences of a warming world, where droughts become more frequent, is an increase in the severity and frequency of wildfires. This has been happening around the Mediterranean with a vengeance this year. Greece, in par­ticular, has suffered a tragic summer of fires. A record-breaking heatwave, with temperatures in the mid-40s many days in a row, turned the drought-ridden countryside into a tin­derbox. In August, fires were breaking out at the rate of a hundred a day.

In the area around Olympia­ birthplace of the Olympic Games­ entire villages were burnt out as flames raced across the countryside, through olive and pine groves, at speeds as fast as a kilometre every few minutes. Flames reached the edge of the ancient Olympic Sta­dium and scorched the ground of the museum, home to one of Greece’s greatest archaeological collections, before being halted by 45 fire-fight­ers aided by six planes, two helicop­ters and 15 fire-engines.

In the western Peloponnese, people fleeing the village of Zaharo were trapped when a car collided with a fire-engine and blocked the road and nine people burnt to death. By the time it was all over, 65 people had been killed, millions of hectares of farmland burned and 110 villages destroyed at a cost of over two bil­lion dollars.

Most of the fires seem to have been started by humans—some accidentally from carelessness with barbecues, rubbish fires, or cigarette butts—but some deliberately. In Greece there are laws against cutting down forest to put up new buildings, but if the forest has burnt down, then sometimes development proceeds. A number of people have been arrest­ed and charged with arson, suspect­ed of having been paid by property developers. The Government was accused of having done too little to control the fires and protest marches took place in Athens. However, the general election took place as scheduled just after the disaster and the government was returned, albeit with a reduced majority.

Interestingly, one investigation found that an increasingly wealthy lifestyle meant fewer people were collecting firewood from the forests and this increased the fuel-load wait­ing for the match to drop.

Elsewhere across Europe, there have also been thousands of fires in Italy, Bulgaria, Croatia, Slovenia and Spain. In the Canary Islands, a fire destroyed a large area of a National Park—home to around half of Spain’s biodiversity. One of the first to raise the alarm was a temporary Park Ranger who later confessed to starting the fire in order to have his contract prolonged. In the United States, drought has affected large areas, including the Rockies, where the lack of food has driven bears down into populated valleys. Near Lake Tahoe, in California, bears have been breaking down the doors of houses looking for a square meal. In the run-up to hibernation, they need to eat for 20 hours a day and have developed a taste for ice-cream and doughnuts.

The drought and heatwaves again created favourable conditions for wildfires. Some states in the south­east, such as Alabama, have had record areas of wilderness burnt. In other areas, the widespread fires of last year reduced the amount of fuel available. This has raised the issue that climatic conditions are not the only cause of large fires—the management of forests also has a role to play. Over-zealous fire-fight­ing snuffs out the frequent small fires that occur naturally. Left to burn, the argument goes, these fires would re­duce the amount of deadwood and fallen timber on the ground, thereby preventing the excessive build-up of dry wood that can fuel a mega-fire.

In the area around Los Angeles, where wildfires are a yearly hazard, they can set-up a disastrous situa­tion for the following winter rains. The vegetation there, known as chaparral, has very high oil content, and so burns intensely. The extreme temperatures of these fires vaporises the oil in the leaf litter. Some of the oil penetrates the ground and con­denses 5 or 10 cm below the surface creating a slippery layer.

The San Gabriel Mountains, rising on the edge of the city, are among the steepest in the world, almost at an angle where rocks will roll down without provocation—especially once the stabilising vegetation has gone. Combine fires and ground lubrication with a heavy winter rain and thousands of tonnes of earth and boulders slide down off the mountains crashing over houses and obliterating anything in the way. The natural cycle for these events in any one valley is around 30 or 40 years—just long enough for people to forget the last one!

In Australia, despite the tease of some winter rain, drought continues over much of New South Wales and Victoria. Melbourne has severe restrictions on the use of water. Most tennis courts and cricket pitches can­not be watered and all but the senior grades may have to be cancelled this summer as the pitches will be too hard and dangerous to play on—un­less they agree to bowl underarm. The fire season has also begun early and is expected to last long.

New light has been shed by archaeologists on the use of fire by aboriginals to manage the wilderness in Australia. Before the introduction of dingoes, around 5000 years ago, it appears there was a legion of small marsupials that ate the vegetation almost as fast as it grew. Consequently, there was little build-up of dead plant material to fuel fires and the fire-loving eucalyptus trees only grew in a few restricted areas.

Once the dingoes arrived, many species of small marsupial were rap­idly driven to extinction or restricted to small island refuges and the foliage grew unrestricted. Then the aboriginals developed the technique of deliberately starting fires to clear away the old growth and allow new growth to come away as food for the larger animals that they feed on. The frequent use of fire suited the eucalypts which then expanded to their present extent.

So, what happens to the fire risk in New Zealand as the world warms? It depends a lot on the wind. Computer projections of the global circulation indicate increasing westerly flow over the country as the century unfolds. In eastern areas of both islands this equates with lower rainfall as well as more frequent strong dry winds blowing down from the mountain ranges—ideal condi­tions for wildfires.

But the dry weather over the South Island in a La Niña is usually caused by persistent anticyclones which have light winds, rather than the dangerous westerlies that come during an El Niño. So, once through the strong winds of spring, condi­tions should not be particularly favourable for wildfires.