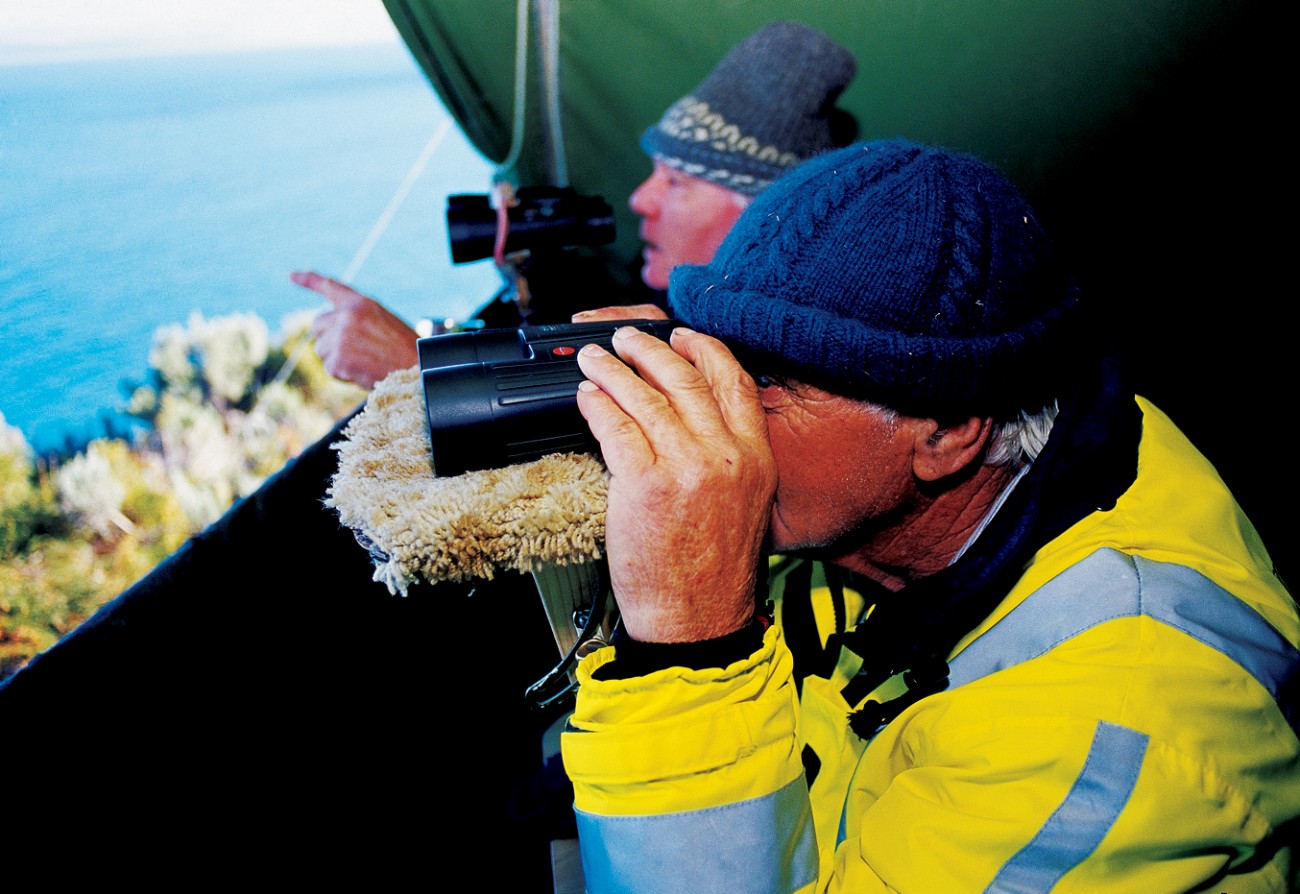 Fifty years ago New Zealand whalers used to sit high above the entrance to Tory Channel, in the Marlborough Sounds, as they scanned Cook Strait for humpback whales (Megaptera novaeangliae). Humpbacks, migrat­ing through New Zealand waters on their way from summer cold-water feeding areas in the Antarctic Ocean to winter warm-water breeding grounds in the South Pacific, were at the heart of New Zealand’s then-thriving whaling industry. Once spotted through binoculars, the slow-swimming mammals were pursued and harpooned, then processed at the nearby Tory Channel whale fac­tory. The meat was canned and sent to England as pet food, bones were ground down to make fertiliser, and oil was refined and exported for use in aircraft engines.

Between 1911 and 1964, New Zealand whalers, most of them based around Cook Strait, killed over 5000 humpbacks. Other whaling nations took a far higher toll. It is estimated that in one two-year period, 1960 and 1961, Soviet whalers operating illegally around Antarctica killed as many as 25,000 humpbacks. The humpback and other whale species, their numbers already slashed to a fraction of their former abundance by the whaling bonanza of the 19th century, came close to extinction. Stocks plummeted to such a degree that whales ceased to migrate through Cook Strait and commercial whaling was no longer viable. The last remain­ing whaling station in Tory Channel closed in 1964.

Today, former Cook Strait whal­ers have returned to their posts on the hill above Tory Channel to scan the sea once again for humpbacks. However, their mission has changed. These old-timers have been recruited by the Department of Conservation (DOC) to put their whale-spotting skills to use in what is now an annual survey, a collaborative effort between DOC, WWF-New Zealand (the local branch of the Worldwide Fund for Nature) and Dolphin Watch Ecotours, which provides a vessel. The survey is undertaken in the last week of June and the first week of July so as to co­incide with what is believed to be the peak in humpback migration—ironi­cally, knowledge obtained from old whaling records.

“We want to estimate the number of humpbacks and other whales passing through Cook Strait during the migration peak, as well as the proportion of whales passing through Cook Strait in comparison with historic records. We’re also hoping to gather information on the timing and pathways of migrating whales and to investigate migratory links between New Zealand and known hump­back breeding grounds in the South Pacific.”

For the two weeks of the survey,between four and eight ex-whal­ers come daily to a makeshift camp consisting of a solid army tent with gas cookers and food supplies, and peer through binoculars from dawn to dusk in all weather conditions. They use a lookout site high on Arapawa Island, close to the spot they occu­pied in the 1950s and 60s. What they do looks easy, but it requires constant concentration and is hard on the eyes, as Ron Perano, whose Italian-immigrant forebears took up whaling in the strait in 1911, describes:

“It’s like looking for a needle in a haystack sometimes, especially if the wind has whipped up the strait. Trying to spot a whale spouting takes real focus.”

Although their whaling days are well behind them, these old boys still cultivate a competitive streak, and false alarms are paid for.

“Any false spotting or cries of a whale is a bottle of something decent—usually whisky,” says Perano with a grin. “It’s one of our old rituals. And when we had someone new on the team who spotted their first whale, they also had to shout some beer or whisky.”

The survey gives the men a chance to rekindle old friendships and indulge in a bit of nostalgia while assisting an endangered species from which they once made a living.

Ron Perano can still identify dif­ferent whale species from a distance. “The humpbacks tend to have a low, softer, more bushy spout and spray,” he tells me, “while the sperm whales and Southern rights either go straight up or to the left.”

It’s this ingrained knowledge that helps the project so much, and these days the old whalers are happy just looking.

Below the land-based spotters, DOC staff on the Dolphin Watch boat wait to be directed to any whales that are spotted. They confirm species identities, take ID photos of flukes, and use something akin to a veterinary dart gun to collect finger­nail-sized skin biopsies for genetic analysis.

“By identifying individual whales using photographic and DNA meth­ods, it’s possible to match whales seen in New Zealand with those spotted by researchers across the South Pacific,” says Childerhouse. “We can learn where humpback whales seen in our waters migrate to by checking our genetic samples and photographs against those obtained elsewhere in the South Pacific. The genetic analyses so far suggest the humpbacks seen in Cook Strait are most closely related to humpbacks around New Caledonia and, to a lesser extent, Tonga.”

In its first year, 2004, the Cook Strait survey counted 35 humpbacks. In 2005, 18 humpbacks were seen, the lower number being thought due to the whales migrating later than usual. This year only 15 were spot­ted—perhaps attributable to the fact that three days of bad weather made sightings impossible.

Comparison of these figures with records from the 1950s and 60s in­dicates some recovery in humpback numbers, but the estimated number of humpbacks passing through Cook Strait today is still around only 30 per cent of the number thought to have gone through in 1960, at the end of a 130-year hunting spree. The hump­back population apparently remains decimated despite over 40 years of protection. However, as Childerhouse notes: “The survey does have its limi­tations because whales may also be passing through at night or they may even be going straight up the east coast [of the North Island]. We only see those whales that pass through the strait in the daytime—and we’re only observing 2 weeks of a 12-week migration period.”

An addition to the survey team this year was acoustics expert Rebecca Dunlop, of the University of Queensland, who is researching humpback-whale communication. She used hydrophones to record the sounds made by Cook Strait whales so she could compare these with her recordings of Australian humpbacks. Says Childerhouse: “Unfortunately no songs were heard this time round, but we think that’s because whale song is related to breeding more than migrat­ing. But we did record, for the first time in New Zealand, social whale sounds, which are more similar to moans and groans than songs.”

Humpback-whale song consists of a series of high- and low-pitched themes, some of which sound very similar to creaking doors and crow­ing chickens. It changes every year, and male humpbacks are thought to sing in the mating season to attract females.

In addition to providing new infor­mation about whales in New Zealand waters, the Cook Strait project will also shed light on potential threats to whales from marine farms, particu­larly large offshore operations. While whales are at risk of entanglement in farm paraphernalia, it’s impossible to quantify the danger of this happening without knowing how many whales pass through an area. This year, a humpback whale became entangled in craypot lines near Kaikoura, just one of seven such incidents reported in the last five years. Most of the whales concerned received injuries.

An added incentive to maintain the survey and determine hump­back numbers is Japan’s recently announced decision to include 50 humpbacks in its new “scientific whaling” quota. These will come from among the animals that migrate past New Zealand.

While the survey will remain on an annual basis at this stage, its location and duration may change.

“If we could undertake a 12-week survey that matched the three-month migration period, our results would be more accurate,” says Childer­house. “There’s also the possibility the team will relocate to Kaikoura, as it’s likely more humpbacks would be seen there. Off Marlborough, the whale migration splits, with some passing through Cook Strait and oth­ers heading directly up the east coast. At Kaikoura, we’d see both groups.”