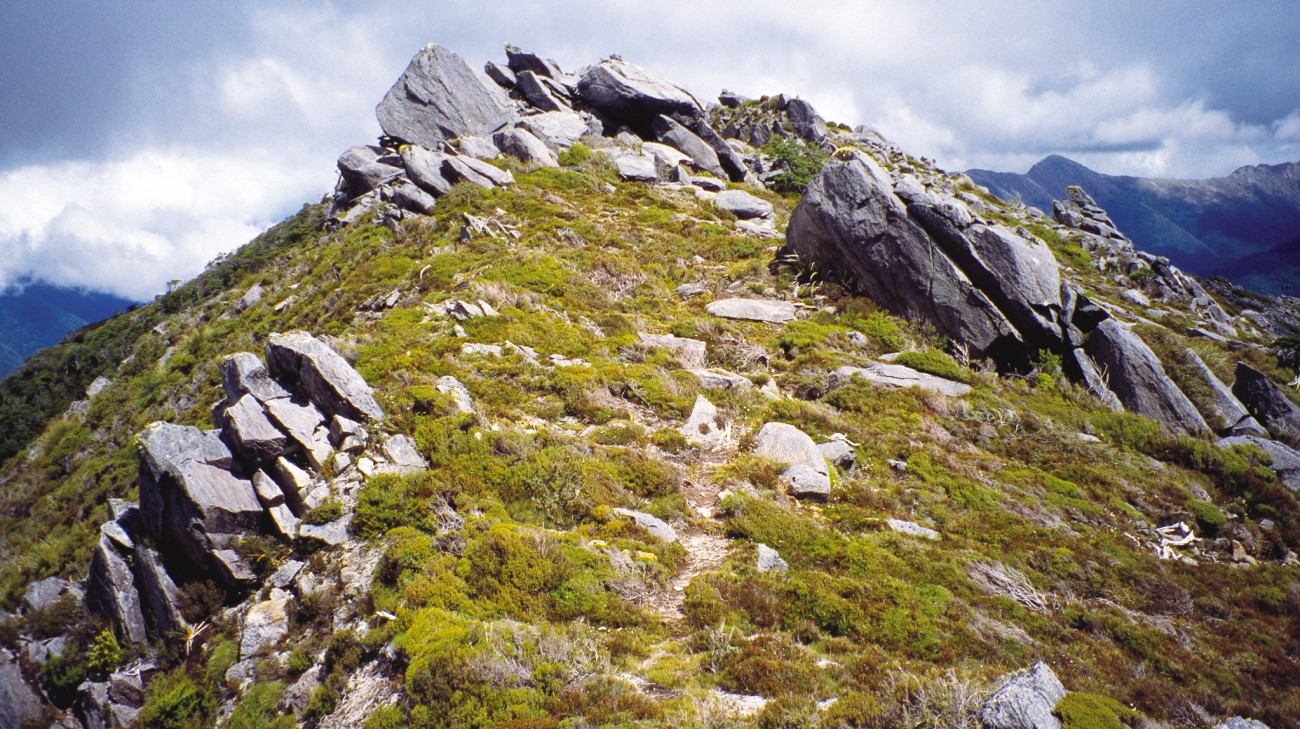 It has long been recognised that New Zealand was once part of the great supercontinent Gondwana, but until recently our link with the ancestral landmass has been based only on fossils and “circumstantial evidence”—New Zealand’s geographic proximity to other major components of Gondwana: Australia and Antarctica.

Now geologists have found rock strata in New Zealand that have a clear Gondwanan origin. Two localities are involved. The first is the ridge tops just north of Parapara Peak, west of Takaka and within Kahurangi National Park. These rocks are sandstones referred to as the Walker Formation. They are of Early Triassic age (250-245 million years ago) and are virtually identical to sandstones of the same age in Antarctica and Tasmania. Their age has been determined by dating of minerals (zircons).

The second locality, within native forest north of Reefton, is a rock)’ exposure in the Waitahu River. These rocks are distinctive volcanic rocks referred to as the Kirwans Dolerite. They arc identical in composition to widespread dolerite of Jurassic age in Antarctica and Tasmania.

Why has it taken so long to discover these important rocks’ Both are very restricted in their distribution and are well “off the beaten track.” They have also been extremely difficult to age accurately.

These rocks are remnants of a vast blanket of sedimentary and volcanic rocks that is characteristic of Gondwana. The combined influences of rapid tectonic uplift and rapid erosion have all but stripped modern New Zealand of this geological heritage. Only these few remote scraps remain, although more occurrences may turn up deep in the West Coast forest.

The term “Gondwana” (or “Gondwanaland”) was introduced in the late 1800s, and at that time New Zealand was suspected of being part of this giant continent. Confirmation did not come until the 1970s, with the discovery of distinctive fossil leaves of Glossopteris. Regarded as a probable ancestor of the eucalypts, Glossopteris forest dominated and characterised Gondwana. The New Zealand examples of this fossil are known from Early Permian rocks some 270 million years old, which once formed a chain of islands off the coast of Gondwana but now rest in the Wairaki Hills north of Ohai, in Southland.

It is now generally accepted that the New Zealand landmass split from Gondwana around 80 million years ago. But what was before Gondwana? Earth scientists speak of an earlier supercontinent called Pangea, in which all continental land had coalesced as a single entity. Prior to Pangea was an earlier Gondwanaland and Laurasia, and earlier still there was another supercontinental configuration, Rodinia (from Russian, meaning “motherland”). Go back still further and you have the continents of Nena, Atlantica, Baltica, Arctica and, the oldest of all, Ur (from the German, meaning “original”).

This plethora of names points to an important geological truth: the continents we see today are by no means fixed entities.

Continents come and go, change shape, grow, shrink, split in two, collide, rotate, rise and sink. For example, new research suggests that western North America broke away from the eastern margin of Australia 700 million years ago, and that the Mojave Desert, in California, was once adjacent to Broken Hill.

The oldest minerals so far dated from New Zealand are from rocks near Greymouth that accumulated as sand on the sea floor some 490-450 million years ago but crystallised more than three billion years ago. They almost certainly originated from granites in Dr. So New Zealand can be linked right back to the oldest recognised continent on Earth.

A fine pedigree, to be sure, but it is with Gondwana that we feel our strongest affection, and the new discoveries in Kahurangi and on the West Coast are a timely proof of that birthright.