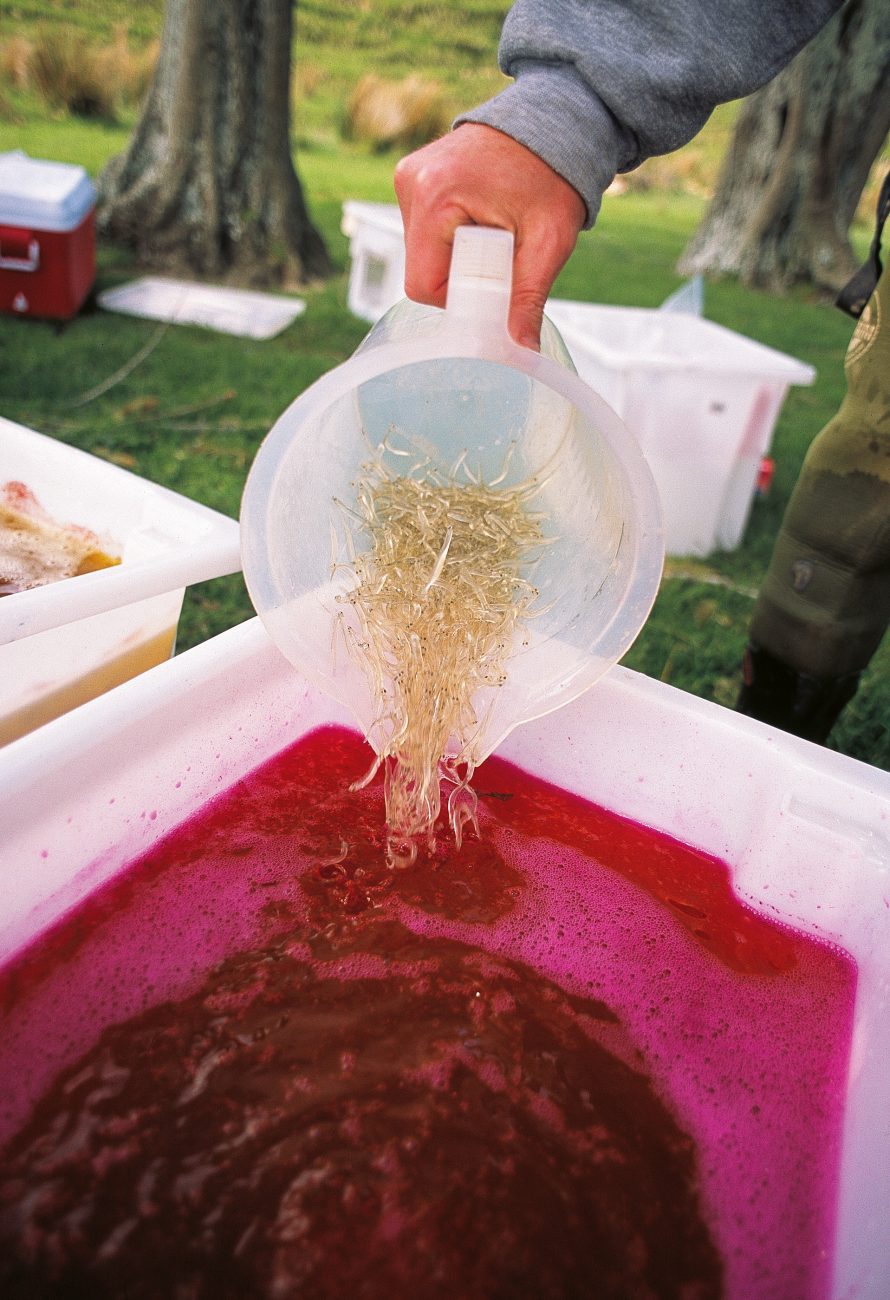 When shoals of whitebait begin their annual migration from the sea to New Zealand’s rivers, there’s a corre­sponding migration of whitebaiters to the river mouths. Bankers, retired folk in campervans, local townspeople and farmers all spend hours braving the elements in anticipation of that elusive “big catch”. Whitebaiting is part of New Zealand folklore, and has given rise to many stories, myths and downright lies. Whitebait themselves are a valuable commodity, regularly fetching $60–90 per kilogram.

But how do whitebait behave when they enter river mouths each spring, and how far and how fast do they travel? Such information is of interest both to fisher­men and to those who seek to maintain the fishery in a healthy state.

The whitebait fishery seems to have been in signifi­cant decline in recent years, with no authoritative answer to the question why. Deforestation, wetland drainage, stream diversion, damming (including culverts and flood gates), pollution, exotic species and whitebaiting are all likely contributing factors.

Dr Cindy Baker, of the National Institute of Water and Atmospheric Research (NIWA), has undertaken studies that have begun to shed light on whitebait’s secretive habits and whether over-fishing may be contributing to their decline. Since even with microelectronics and computer chips it’s impossible to fit a transmitter to a whitebait, Cindy’s research entailed staining numbers of fish, caught as they entered the study river, with non­toxic dye and releasing them in batches of 2000–4000. Different colours—pink or orange—indicated where they were released.

The dyed fish were usually released within an hour of staining, near the mouth of the river on an incoming tide. With early-morning tides, they were held in a holding tank in the river overnight. A sub-sample of fish was kept alive in a tank to see how long the colour lasted (around five days) and to ascertain whether staining affected survival.

After a release, fishermen were interviewed over the following three days to determine how many coloured fish had been captured, as well as where and when. Fish­ing-stand locations were accurately mapped using GPS.

“Assuming coloured fish behave the same as other whitebait, then the number of coloured fish not caught can be used to determine the percentage of fish es­caping,” explained Cindy. “If 1000 coloured fish are released and fishermen catch 200 of them, then 800 fish, or 80 per cent, have escaped”.

In 2001 Cindy conducted a study on the small Op­erau River, at the head of Kawhia Harbour. There are only three registered stands on the Operau, with between three and 20 people fishing (mostly scoop-net­ting) at any one time. In recent years she has carried out a study on the much larger Mokau River, in north Taranaki, which has approximately 250 registered stands. Most fishermen use traps, although scoop-netting at the river mouth is popular.

The first hurdle Cindy had to overcome was to predict when the whitebait would be running, and to catch enough to make the study viable (up to 3 kg). Local residents and keen whitebaiters Ray and Bev Christiansen provided vital local knowledge of the Mokau. They also allowed Cindy to use their stands to catch whitebait.

“Whitebaiters are extremely ac­curate in predicting what conditions bring whitebait in, especially in rela­tion to their own stands,” she said.

Once the dyed fish had been re­leased, the follow-up work had to be commenced whatever the weather. Cindy would spend the next three days boating up and down the river checking to see how many coloured fish had been caught. It wasn’t a glamorous job: she was often knee deep in mud and waist deep in water.

Local whitebaiters saw the research as a positive step towards helping conserve their fishery and were very cooperative. The flat-bot­tomed NIWA boat became a com­mon sight on the Mokau. Whitebait­ers had only to shake their heads as it drew near to inform Cindy that they’d caught no coloured fish.

Whitebaiters often caught the cus­tomary number of normal whitebait with only a couple of coloured fish amongst them, which seemed to con­firm that the coloured whitebait were mingling with other migrating fish.

Larger catches of coloured fish were recorded when the river flow was high. This was probably because stronger currents push whitebait to the margins, where traps are located. Conversely, low river flows gener­ally resulted in smaller catches, as whitebait swim nearer the middle of the river when currents are weaker and so avoid traps.

Dyed whitebait were released at one of two locations, either the Mokau boat ramp, near the mouth, or Awakau Bridge, 22 km upriver.

“Some fish move downstream and are caught by scoop-netters at the mouth,” said Cindy, “while others go back out to sea and get re-caught in neighbouring rivers, such as the Awakino. When we release at the boat ramp, it’s not too far for them to return to the sea. The releases at Awakau Bridge are for attempting to quantify how many go downstream.

“Contrary to popular opinion, we’ve discovered that under clear sky conditions, fish are actively mi­grating at night. It was always thought that whitebait only travelled upstream during daylight hours. Whitebait can travel up to 18 km over 36 hours, and their maximum migration speed is about 1.5 km per hour.”

The migration speed (which takes the tidal cycle into account) in the two study rivers proved to be pretty simi­lar. It was a little slower in the Operau, probably a result of the lesser tidal push in a small river.

“In one of the Mokau’s minor tributaries we stomach-pumped some eels to see how many whitebait they were taking,” said Cindy. “After heavy rain and with high flows, the eels were mainly feeding on terrestrial invertebrates. Overall the eels were taking fewer whitebait than we ex­pected. Kahawai and various marine fish must take a toll on whitebait but this predation hasn’t been quantified.”

Cindy’s studies have revealed that whitebait spend time in the tidal zone of a river before penetrating further upstream. It’s thought they feed in the estuary to gain strength before braving the river’s strong current. Another finding was that more fish moved downstream than was originally suspected. There could be a number of reasons for this, including the possibility that staining the fish may have disrupted their natural migration pattern.

“You do find that catches on each river vary from year to year and it’s hard to say what the cause is, but the loss of the breeding stock’s habitat is probably having the greatest effect on whitebait numbers,” commented Cindy. She had to take variable river and climatic conditions in her stride, as the study could only be undertaken when fishermen were catching decent numbers of whitebait.

“We were lucky on the three-year Mokau study to get high and low flows, which gave us a good range of condi­tions. But it’s hard to come up with concrete findings as there are so many variables,” she said. “Those variables mean we have to be more conservative and less specula­tive. But if we don’t undertake these studies we’ll have no idea of whitebait’s migration patterns anyway.”

And the result? About 30 per cent of fi sh were taken by  whitebaiters.