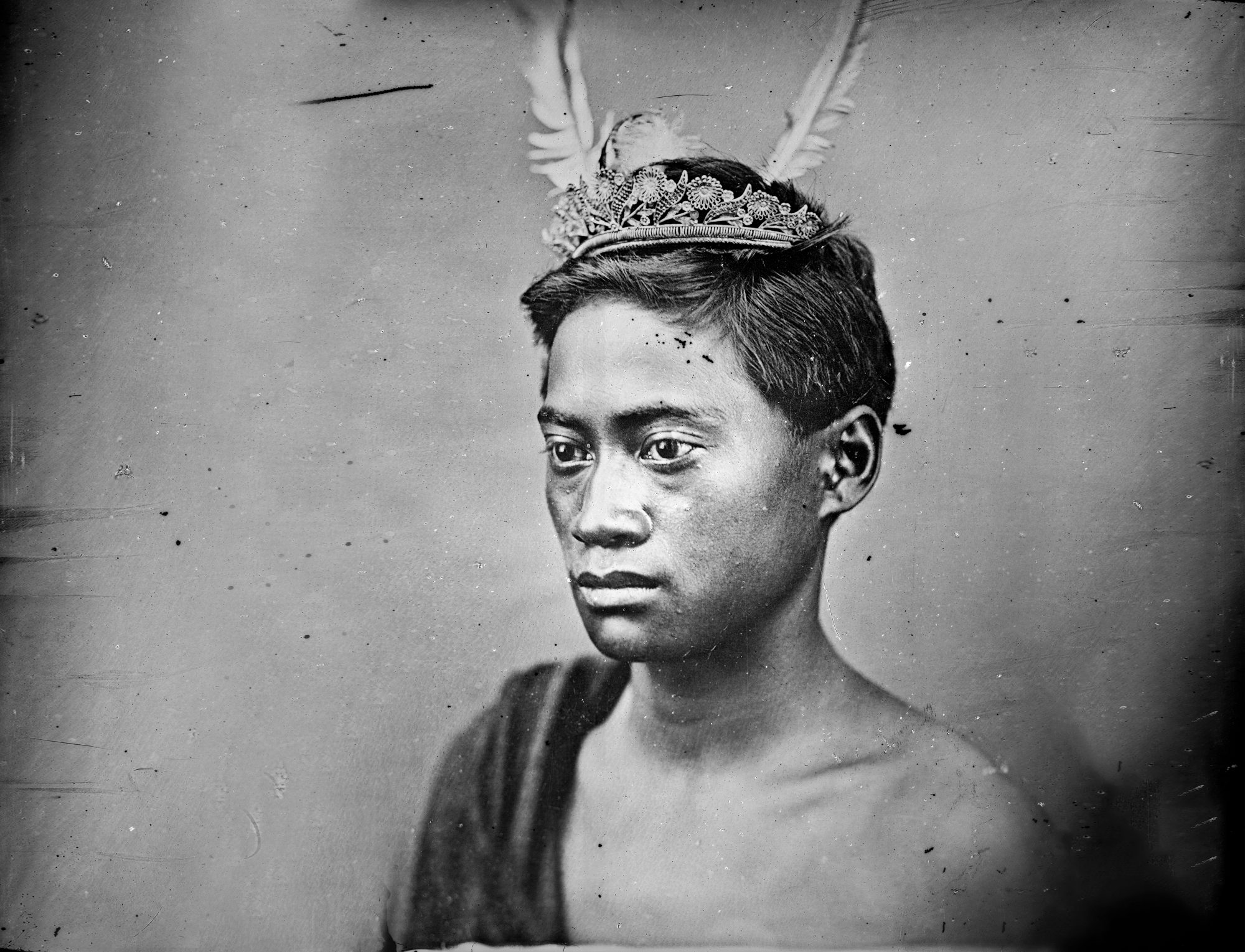 Nineteenth-century photographer John McGarrigle is something of an enigma. A feisty, litigious man who tried his hand at farming, gold speculation and (more than once) the liquor trade, he left few clues about his origins or working life yet produced some of the country’s most sensitive and technically accomplished early portraits of Māori.

Born in County Donegal, Ireland, McGarrigle is thought to have arrived in Dunedin from Scotland in 1860 or early 1861 and, after a spell as a publican, took up farming at White Swamp on the town’s western fringe. His predilection for legal proceedings—which researcher Keith Giles has found evidence of in his earlier life in Glasgow—was rekindled soon after he reached the colony. According to Giles, in June 1863, McGarrigle appeared before the Supreme Court at Dunedin on a charge of horse stealing, which he was able to dis­prove. In July 1866, the Otago Witness reported that he was again before a judge, this time for throwing a bailiff into a water­ing hole, having taken to him with a brass candlestick as he tried to seize property in compliance with a court order.

Thanks to a sympathetic jury, McGar­rigle got the better of the clash, but he failed the following year when he brought a civil action against a Dunedin tavern owner for breach of contract. The case proceedings are significant in that for the first time, McGarrigle identi­fied himself as a photographer, claiming that he took up the vocation having failed for years to make farming pay.

McGarrigle bought “photographic plant” off photographer James de Maus, who may also have trained him, but despite the Otago gold rushes of the 1860s, which helped treble Dunedin’s population and pumped new­found wealth into the town, he didn’t prosper. Eventually, competition in his new profession drove McGarrigle north—as it later did photographer Arthur Iles—and in 1869 he opened the American Photographic Company in Queen Street, Auckland.

Satisfying the appetite of collectors for a new vogue object, the carte de visite, was by then proving lucrative for photographic studios and McGarrigle was not slow to exploit it. Cartes de visite were small, stand­ardised albumen prints, often glued to thick printed or embossed card and featur­ing popular subjects. The small size of the image enabled the use of short focal-length lenses that allowed faster exposures. Not needing the fragile cover-glass of daguerre­otypes, the paper photographs could be readily posted overseas, and equipment that enabled multiple negatives to be made from each exposure dramatically lowered production costs.

Queen Victoria possessed more than a hundred albums of cartes depicting royalty and other social luminaries, and at the height of their popularity hundreds of mil­lions of the affordable photographs were printed in England each year.

Though the colony lacked the range of celebrities found in Europe, enterprising local photographers were able to tap the Old World’s increasing fascination with exotica as the European empires expanded. With their tattoos, woven cloaks and dig­nified bearing, Māori made compelling subjects for such image-making—which became increasingly idealised as the land wars subsided and the notion of Māori as a doomed race began to take hold.

Why McGarrigle chose to call his busi­ness the American Photographic Company is unclear. Perhaps he had first come across cartes produced during the American Civil War (1861–65), which had hugely boosted the popularity of a format ideally suited to preserving the memory of soon-to-be sepa­rated kith and kin. McGarrigle may have hoped to associate himself with the New World application of an evolving technology.

His later claim for the company as “pho­tographers to the American, Mexican and New Zealand Governments” is even more problematic, given that he is not known to have visited the continent, let alone to have had commercial dealings with any of its citizens.

During the eight or nine years that McGarrigle worked in Auckland, he pro­duced a large number of cartes of Māori subjects. In a newspaper advertisement in May 1874 announcing the move to more extensive Queen Street premises, he boasted of having the largest stock of “Māori Celebrities” in the colony.

When, in September 1876, a fire destroyed McGarrigle’s studio, his wife Rachel testified—in a court action against the insurer—that the stock had included some 22,000 prints of Māori portraits, neatly stored 50 to an envelope.

Uncropped plates now held at Te Papa reveal the torn carpets and stained walls of a studio that was evidently under finan­cial strain, despite McGarrigle’s claim that his relocation was due to “increase of busi­ness”. For reasons of thrift, or on principle, he avoided the elaborate painted back­drops, Corinthian pillars and luxurious drapes favoured by some competitors.

However, the surviving prints are also testament to his skill as a photographer. His frequent use of technically demanding close shots to achieve better focus and def­inition suggests a rapport with sitters who for the most part appear at ease and confi­dent. Though McGarrigle used a small rep­ertoire of classic poses for his subjects, the controlled use of natural light (he worked under a skylight) helped to create memo­rable images.

Like many of his contemporaries, McGarrigle kept a supply of props—includ­ing cloaks, mats and very likely even feathers, tobacco pipes and weapons—to dress his Māori sitters, and several of the objects make a frequent appearance.

Some of McGarrigle’s portraits evoke the 1860s Native American photographs of Charles DeForest Fredricks—the man credited with introducing cartes de visite to the United States. Fredricks’ studio photographs of Sioux, Pawnee, Arapaho and other tribes presented them—adorned with feathers, traditional costume and sometimes weapons—in the historical context of Western expansion. As with contemporary photographic representations of Māori, Fre­dricks’ cartes offered a way of seeing ‘van­ishing tribes’ in a non-threatening (indeed, even ‘collectable’) way.

It is not impossible that Fredricks or one of his contemporaries, such as William Jackson, influenced McGarrigle’s choice of business name as well as laying down a template for the photographic treatment in the studio of indigenous peoples.

A number of contemporary New Zealand photographers, including Daniel Mundy, James Bragge and the Burton brothers Walter and Alfred, followed suit, though the unyielding terrain and the time-consuming wet collodion system they were obliged to use (and which required a supply of pure water) made inordinate demands on the skill and patience of these itinerant photographers, at least until the develop­ment of the simpler dry-plate process in the mid-1880s.

Mundy, for example, recorded that the time needed to unload his pack horses, set up his tent dark room, sensitise a glass plate and expose it was, “under favourable cir­cumstances”, 45 minutes.

In 1874, Mundy penned a vivid descrip­tion of his trials, which included waiting “ten days on the banks of the Otira River, during a heavy fall of snow, hail and sleet, before I dare attempt to cross; it was so flooded with ice-cold water coming down from the Alps”.

However, McGarrigle was not tempted to document Māori in the field. He sold his first studio the year Mundy wrote of his own hardships, and managed to interest the Auckland provincial government in backing a venture to promote immigration. It involved McGarrigle producing a series of views of selected districts, supplemented by useful information on such things as climate and soil. All he required was access to knowledgeable locals and “a conveyance for my apparatus”.

By January 1875, McGarrigle had com­pleted a photographic survey of Auckland Province, including a trip to the Hot Lakes District. However, the provincial govern­ment proved an unenthusiastic partner, with little appetite for his proposed view book, and the anticipated income from the photographic survey did not eventuate.

The destruction of McGarrigle’s studio by fire the following year put an end to his time in Auckland—but not to his misfor­tune. In March 1877, an auctioneer’s notice in the New Zealand Herald announced that he was “retiring from the profession and leaving the Colony”. Cameras, lenses, chemicals, embossing and rolling presses and a burnishing press were to go under the hammer, along with a collection of pho­tographs and 4000 negatives, “many of them noted and famous characters”.

By mid-1877, McGarrigle was running a drapery store in New South Wales, but within months a mishap with a kerosene lamp set fire to the building, destroying not only his underinsured goods, but a large collection of negatives he had taken over from New Zealand.

Eventually, he returned to photography and to New Zealand—appearing for a time as manager of the American Permanent Photographic Company in Colombo Street, Christchurch. He went on to open a branch in Timaru, which he then relocated to Oamaru. But from there, even for such a tenacious researcher as Giles, the trail­ which eventually leads back to Sydney—is hard to follow. It doesn’t help that McGarrigle apparently lost his flair for the court appearances that over the years had thrown intermittent light on his doings, or that his son—by then grown to manhood and likely following his father’s trade—was also named John.

But what really matters are the por­traits, more than a hundred negatives of which found their way into the working stock of Alfred Burton and thence to the Dominion Museum (now Te Papa).

Images from the frontier