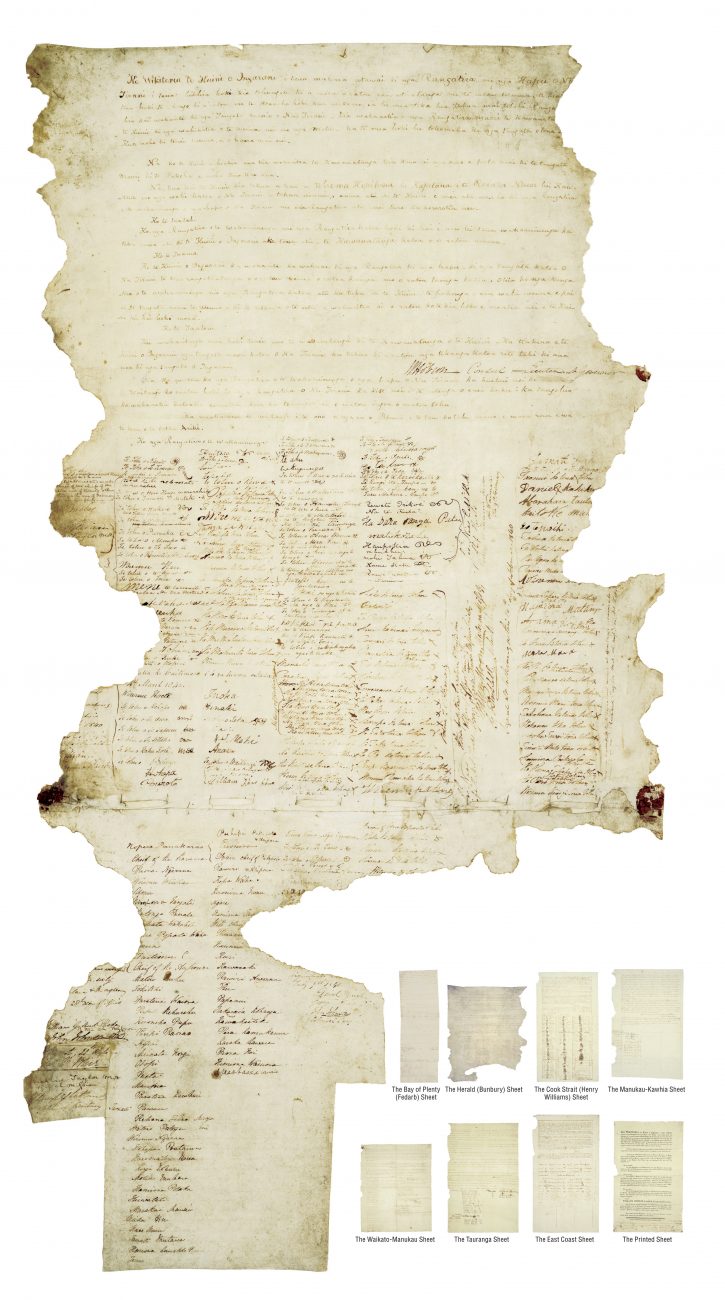 Readers may be familiar with the eight-metre­-high facsimile of the Treaty of Waitangi enshrined in glass and on permanent display at Te Papa, but the original treaty is made up of nine documents kept in the Constitution Room at Wellington’s National Archives. Here you will find the Waitangi sheet, named after the site at which the first document was signed, as well as the various sheets that were sent around the country and which collectively represent the agreement signed between Māori and representatives of the Crown in 1840.

It is displayed in a temperature-regulated room built to withstand earthquakes, behind a heavy-duty bank-vault door, beneath subdued lighting and bullet-proof glass. It wasn’t always so well preserved, which is more than apparent from its condition. The Waitangi Sheet has suffered most, and is faded, water-marked and a good section has been chewed away it is one of two sheets made of parchment, which rodents find more digestible than paper.

Each of the sheets has its own idiosyncrasies. The Waitangi Sheet is tightly packed with around 240 names and signatures William Hobson had initially hoped to get everyone’s names on one sheet. The Waikato-Manukau Sheet is the only one to have been written in English (translated from the Māori version) but carries only around 35 of the treaty’s 540 signatories. The Cook Strait Sheet, otherwise known as the Henry Williams sheet, is the most orderly, with 132 names neatly divided into the geographic regions and meticulously arranged in vertical rows.

The printed sheet is the least legal looking: missionary William Colenso had printed 200 copies of the treaty’s text to be distributed among Māori, one of which was returned, with five signatures on the bottom of the page. A faded sentence written above the names and signatures states: “We all the undersigned, have signed up to the talk.”

The treaty was written hastily; it took less than a week between Hobson’s first draft and the first signing. It revolves around three articles, but various key points were lost in translation. The Māori version translated the word “sovereignty” to kawanatanga (governance), which Māori believed gave the government only limited power over their lands the impact of British sovereignty would have been downplayed. The English version guaranteed Māori “undisturbed possession” of all their “properties”, while the Māori version guaranteed them “tino rangatiratanga”, or full chieftainship over their taonga.

The Māori understanding of the treaty was at odds with those negotiating the agreement on behalf of the Crown, and the document has been contentious ever since. It is the country’s most influential artefact, its founding document, that is in so many ways representative of the country’s colonial history of trust and betrayal, goodwill and disregard, honour and warfare, appropriation and reparation. It remains a quasi-legal document, having never been ratified in New Zealand law, but it has obliged New Zealand governments and the judiciary to recognise the spirit in which people signed, and its principles of justice, equality and protection.