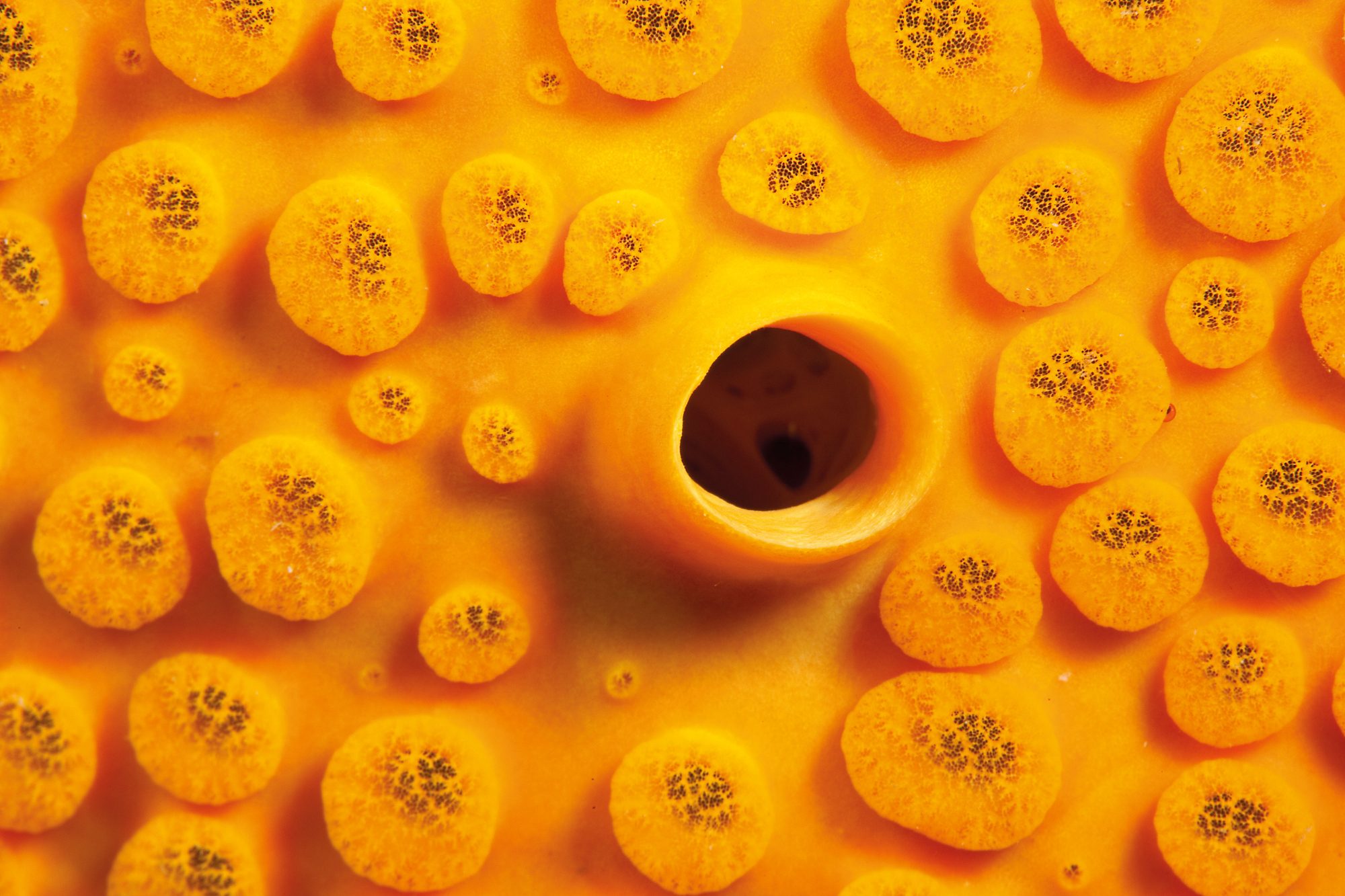 I can’t fully recall how the affair started, it was so long ago. I was in Pat Bergquist’s invertebrate zoology class, at the University of Auckland, in 1975. She was talking about sponges. Bergquist (Dame Patricia, as she became in 1994, when she was made a dame commander of the Order of the British Empire) was a world authority on the spine­less creatures. She made them exciting—surpris­ing as this may sound—and I was captivated.

The following year, I enrolled for a master of science degree in marine zoology, with Bergquist as my supervisor. My topic? Sponge taxonomy. Classifying them is a gargantuan task because sponges are a vast tribe; there are perhaps 10,000 species. They are present in every ocean, from pole to pole, and some have conquered fresh water. They inhabit the wave-splashed shallows of rock pools and the dark stillness of abyssal depths. They come in every colour of the paint chart, and range from delicate lacy creations to massive structures metres thick and the consistency of hard-packed snow.

These are the critters to which I devoted two years of my life. I use the word ‘critters’ advisedly because, despite appear­ances, they are animals. (Even the great Linnaeus mistak­enly thought sponges were algae.) They lack nervous, digestive and circulatory systems. They don’t travel much, either, though some individuals have been observed to move a few millimetres in a day. They spend their days and years (and some live for thousands of years) filtering small par­ticles from seawater.

Porifera, the name of their phylum, means ‘pore-bearer’, and they bear millions. Through the co-ordinated beating of myriad whip-like flagella, they draw in water through the pores on their external surfaces, circulate it through a labyrinth of body cavities, then pump it out, usually through large openings called oscula, which are often raised above the surface on turrets that look like the cooling towers of power plants.

Considering the simplicity of their activities, the diversity of their architecture is dazzling. The more elaborate types rely on two main building materials, which they manufacture: flexible fibres called spongin (the stuff that gives a bath sponge its bounce-back elasticity) and tiny mineral elements called spicules.

I spent months counting and cataloguing spicules under a microscope, a task that sounds tedious but which can be magical, on account of the spectacular shapes that spicules take: needles, claws, dumbbells, rings, hearts, mushrooms, toothbrushes, crochet hooks, and many others which defy description. There are three-pointed stars, like a Mercedes-Benz mascot, tetrahedral types that look like tyre-puncturing caltrops, and polyhedral shapes, like miniature sea urchins.

Spicules are made of either silica or calcium carbonate, and the bodies of most sponges are packed with them. They give a sponge stiffness and solidity, and possibly deter preda­tors, which may find a gutful of grit an unpleasant side-effect from a bite of sponge.

Of course, there are exceptions. Several species—including a few in the group I was studying—are spicule-free, relying solely on spongin fibres for their structure. And some encrusting types have no skeletal stiffening at all. Their thin, crepe-like bodies are held intact by a protein jelly. One species I collected off Spirits Bay, at the very tip of the North Island, seems to borrow its building material from the environment. Specimens of this sponge were packed full of sand grains held together by spongy fibres.

The delicate glass sponges, found in deep water, take the scaffolding idea to extremes. They create complex geometric spicule arrays from which the living tissue is suspended like a garment. These sponges cannot contract, which seems an oxymoron: sponges that aren’t spongy. In fact, many species lack the elasticity we associate with sponges. Some pack so much silica into their bodies that they become rock-hard. Another group actually become rocks—solid lumps of calcium carbonate, with the living tissue just a rind at the surface. Each year, the sponge animal secretes a little carbonate. Over the thousand-year lifespan of one of these sponges, the skeleton becomes massive, with growth bands that can be read like the rings of a tree.

Some sponges produce spicules not just for construc­tion but defence. They shed a carpet of silica shards that may keep away sponge-eating sea urchins. Sponges’ main line of defence, however, is chemical. Like other rock-encrusting creatures, they produce toxins to stop other organisms settling on top of them. This is not to say that sponges are loners.

Many tolerate, and even benefit, from associations with other animals. Their turrets and chambers make excellent refuges for small fish, shrimp, sea anemones, worms, sea stars, barnacles and crabs.

One genus of shrimp has become a sponge-dwelling specialist, diversifying so that each species of shrimp is associated with a particular species of sponge. A single loggerhead sponge—a large, barrel-shaped species­ was estimated to have 16,000 shrimp living inside it.

At the other end of the numbers scale, a species of glass sponge known as Venus’s flower basket is a traditional wedding gift in some Asian cultures, symbolis­ing fidelity until death. The tradition is based on the fact that when the sponge is alive it is home to a single male and female shrimp, which live their entire lives within the basket.

One species of sponge, highly toxic to fish, has a tendency to grow on gastropod shells, which are then sought out by hermit crabs when the mollusc dies. For the hermit crab, living with a toxic sponge on your shell would be like carrying a can of pepper spray.

Perhaps the most remarkable sponge association involves bottlenose dol­phins in a single bay in Western Australia. Dolphins in Shark Bay, a World Heritage site near the westernmost tip of Australia, make use of the physical cushioning of sponges by attaching a piece of sponge to their snouts. The sponge protects their beaks when they search for desirable prey species among sharp rock, shell and coral rubble on the seafloor. The fashion for snoods appears to be unique to this one dolphin population.

Underwater photographer David Doubilet likes to joke that he was responsible for the least-popular article National Geographic has ever published, ‘Consider the Sponge’ in March 1977. This was before a lot of things were discovered about sponges that have given them (marginally) more cachet.

One of those discoveries was made in 1995, when two French spongologists found a sponge that was carnivo­rous in a Mediterranean sea cave. Since then, dozens more predatory sponges have been found, including several from New Zealand. The world expert on “killer sponges”, as they were sensationally dubbed by some media outlets, believes New Zealand may be a global hotspot for these animals.

Theirs is a relaxed form of predation. They rely on claw-shaped spicules on their surfaces acting like Velcro, snagging the bristly exoskeletons of small crustaceans and holding them. Cells then migrate from around the body of the sponge and cluster over the trapped creature. Over a week or so (not a lot happens fast in sponge time), the cells slowly ingest the prey.

In 2011, NIWA researchers found three new carnivorous species in deep water on seamounts on the Kermadec Ridge and Macquarie Ridge. One of the new species is covered with menacing spicules shaped like a shark’s jaws, and the species accordingly took the same species name as that of the great white shark: Carcharias.

Many carnivorous sponges have dispensed with their old filter-feeding ways, and their body shapes, freed from the need to function as efficient water pumps, have become truly bizarre. One species that made a splash in 2006 was the ping­pong tree sponge, which looks like a light fitting—15 blue translucent globes arrayed like a starburst.

Then, in 2012, the incredible harp sponge was discovered three kilometres below the surface off the coast of California. The ‘harp’—in fact, three or four harps facing in different directions, all anchored to a central point on the seabed­ has 50 or so ‘strings’, filaments rising from a vane that lies parallel with the ocean floor. These Aeolian harps of the deep, strummed by the sea wind, are deadly predators. Each string is covered with fine, spicule-studded hairs, and creatures drifting between them are snared and consumed.

On the end of each harp string is a knob containing sperm. (Picture a row of tall lollipops.) All sponges reproduce sexually, and many can reproduce asexually as well, either by producing buds or, especially in the case of freshwater sponges, produc­ing tough spore-like struc­tures that can survive extreme conditions such as freezing or drying out.

The word ‘humble’ is often used to preface ‘sponge’, a relic of the great-chain-of-being view of life that equates complexity with superiority. But the more we learn about sponges, the less inferior they seem.

In fact, perhaps we owe sponges a debt of gratitude. Earlier this year, a group of British scientists proposed that sponges may have been responsible for oxygenat­ing the prehistoric ocean. The conventional view is that rising oxygen levels in the oceans some 700 million years ago triggered the evolution of complex life forms. The team suggested that filter-feeding proto-sponges could have removed organic matter from the ocean depths, changing nutrient concentrations in ways that favoured the flourishing of photosynthetic algae. More algae, more oxygen, not just at the surface but throughout the water column, as algal tissue sank after death.

By enriching the oceans with oxygen, the scientists argued, a feedback loop devel­oped that spurred the devel­opment of further complexity. According to this view, sponges created the very conditions in which our ancestors could evolve.

It is not just Earth scientists who are interested in sponges. Cell biologists are intrigued by some of the unique properties of sponge cells, such as their mobility. Some sponge cell types move around the body of the sponge, changing its shape and even its position on the substrate. Some sponge cells are also totipotent, meaning they can change from one type to any other. This lack of specialisation has made them a focus for biomedical research, in the same way that embryonic stem cells, with similar levels of potency, have become indispensable in the study and treatment of disease and injury.

Biochemists are drawn to sponges for yet another reason: their production of bioactive compounds. New Zealand researchers have been involved in isolating a cytotoxic agent from a type of sponge living in Pelorus Sound. Peloruside A, as the compound has been called, inhibits cell division and could be useful in cancer treatment. Other scientists have been looking at how the sponge could be farmed in commer­cial quantities, should Peloruside prove to be a medical winner.

I suppose I might have had a stake in some of this excit­ing work, albeit at the modest level of identifying which sponge is which. I had the chance to do further research, but decided not to—threw in the sponge, so to speak—and chose another path producing magazines instead of monographs.

I still have a soft spot for sponges, especially ‘my ones’, the Haplosclerida. There’s a photo of one of them in this feature. I can picture its spicules even now…