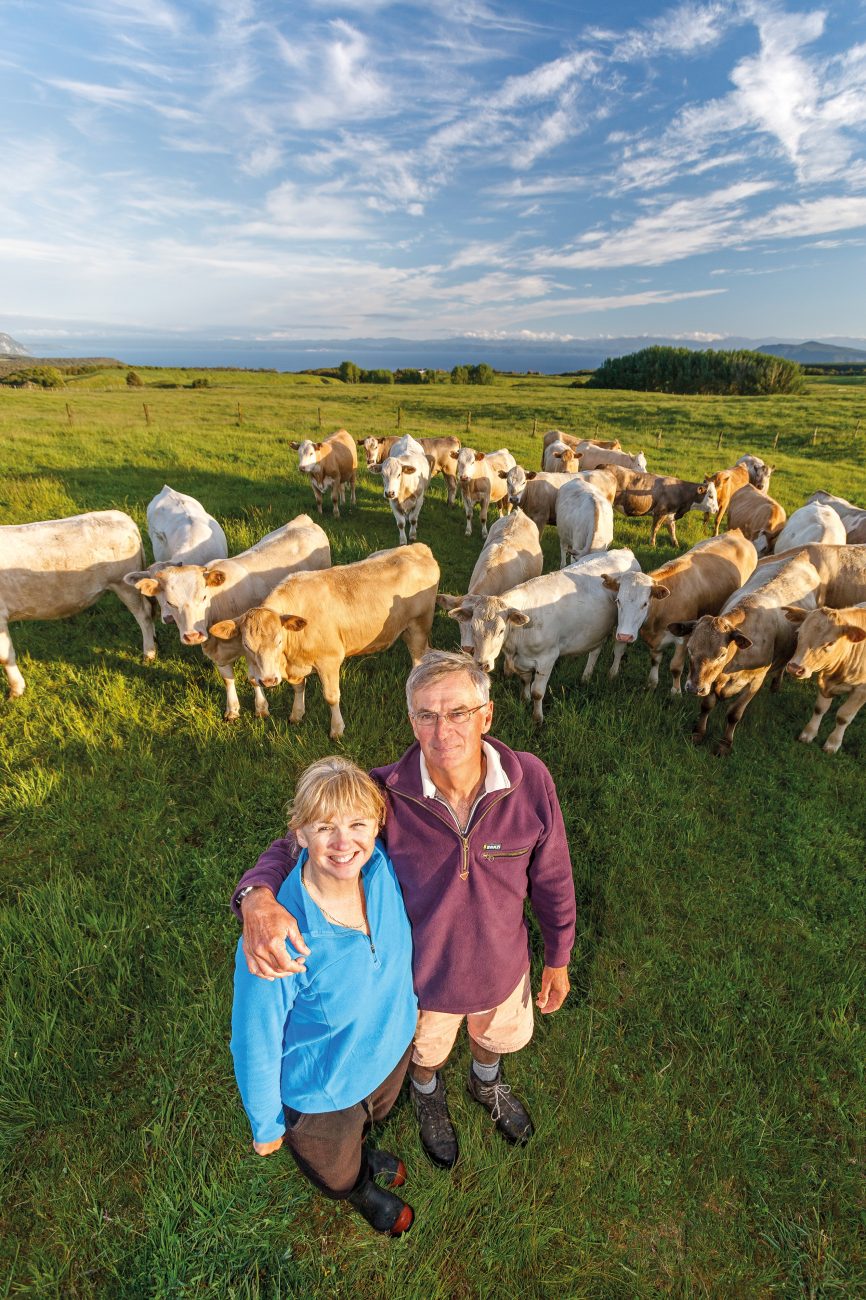 Sharon Barton’s pen hestitated over the box labelled ‘Occupation’. Usually she’d write ‘Senior Lecturer’, but she’d just left all that behind in Auckland. She looked up to find her husband, Mike, watching to see what she’d put down.

“You have a problem with writing ‘Farmer’,” he said, amused.

Mike and Sharon Barton’s move to a 142-hectare property in Tihoi, west of Lake Taupō, had been a long time coming. They arrived at farming gradually, accruing capital by buying rough blocks of land near Auckland and doing them up—fencing, clearing, then selling them—alongside careers in tertiary education, Sharon in languages and Mike in management.

But the Bartons wanted a more physical lifestyle, one that required them to be fitter and gave them greater control over their daily routine. Mike wanted to hunt and fish  at weekends—in the Taupō region, where he used to do that as a kid.

In 2004, in their late 50s, the couple bought a beef farm in Tihoi and left their jobs.

Mike had a better “concept of farming” from the outset, says Sharon, but she eagerly started teaching herself about drench resistance and animal health. They determined that they’d both learn how to do everything on the farm together, but Sharon quickly discovered an affinity for stock buying at auction, while Mike delved into farm science.

Change loomed over the region: farmers in the Taupō catchment faced the country’s first nitrogen cap. That meant permanent restrictions on the number of animals permitted on each farm, in order to limit the nitrogen that leached via stock urine into waterways. Imagine, says Sharon, a car dealership suddenly being told it was allowed to sell only a certain number of vehicles per year.

Mike found himself representing Taupō farmers in negotiations with the government. “The legislation that was going to be visited on farmers in the catchment was going to happen everywhere over time,” he says. “It was an opportunity to be a guinea pig, or an early adopter, depending on how you want to spin it. Getting involved in the early stages gave us the chance to influence the outcome.” He pauses. “There were times where we reflected and thought, ‘Well, what have we done?’”

By 2006, there was nothing the Bartons could do to improve the environmental performance of their farm, but costs kept rising, and they weren’t allowed to add more than the 400 Charolais/Angus heifers they already had.

The only solution was to increase the value of the meat they sold. Would people pay more for a product that was guaranteed to protect Taupō’s pristine waterways? No, said popular wisdom.

They tried it anyway, launching the brand Taupō Beef in 2011, and instructing marketers to sell it at “crazy” prices—20 to 30 per cent more than other premium meat products. By 2012, the Bartons’ Taupō Beef steak was outselling a cheaper dish at the Taupō Hilton four to one. Although the couple continued to add other suppliers to the brand, demand outstripped supply.

In the meantime, the Bartons sought funding for research conducted within the Taupō catchment, and their property became the site of AgResearch’s largest-ever farm-scale trial. Now, there’s a 25-year Landcare Research lab embedded on the farm, and frequent visitors from around the world. “We often joke there are more scientists per hectare than cattle,” says Sharon.

The Taupō catchment, and the Bartons’ farm, has become the test case for farming successfully under strict environmental limits—something neither anticipated when they sought a lifestyle change.

“It has completely taken over every aspect of our life, really,” says Mike. “I wouldn’t change it for anything because I think we’ve both grown as individuals as a result of it. Sure, there’s been some rough stuff. But it’s those things that define you. Althought it has limited the amount of hunting and fishing that I’ve done…”