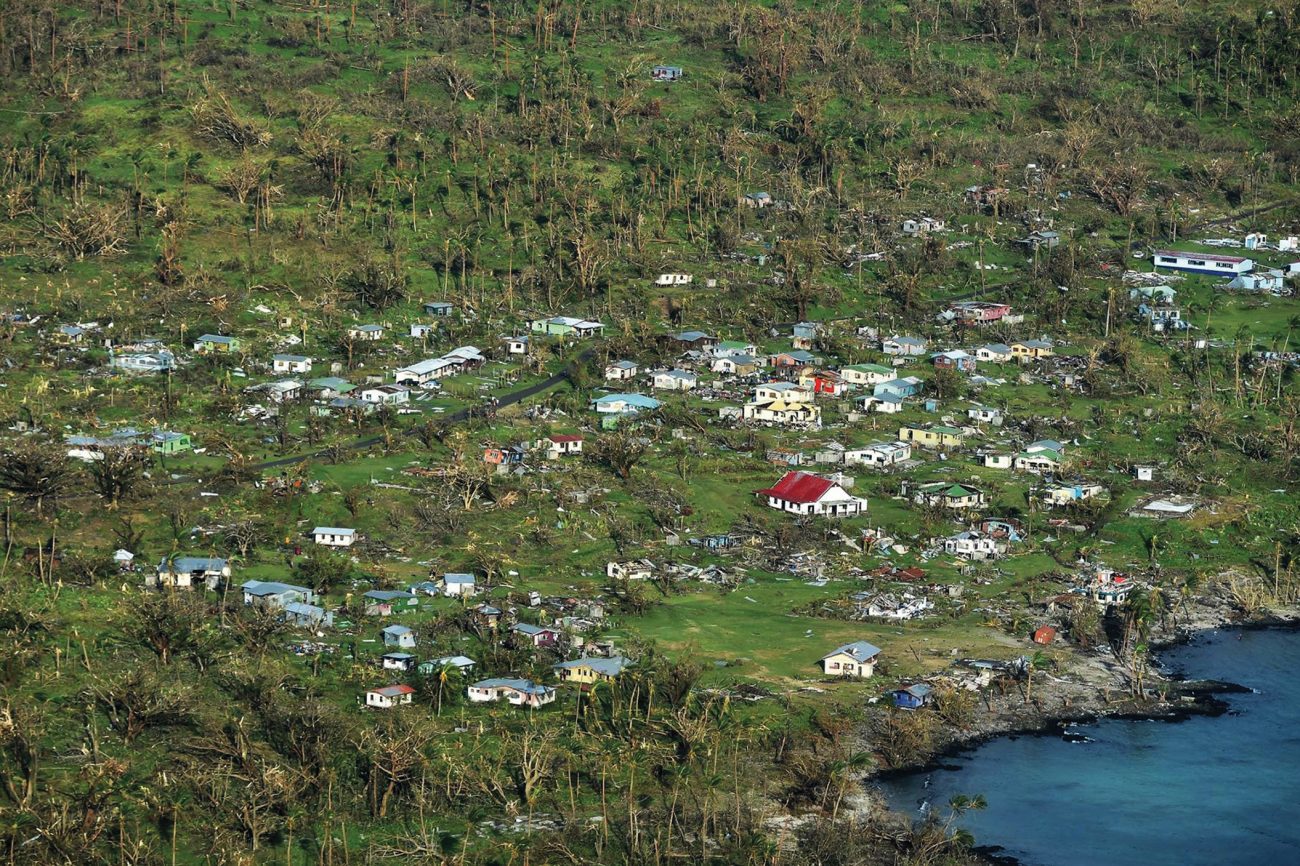 As Tropical Cyclone Winston came ashore on the Fijian island of Vanua Balavu on February 20, an automatic weather station recorded a mean speed of 233 kilometres per hour and a gust of 306 kilometres per hour before it suddenly went offline, presumably blown away. This is the strongest wind ever recorded in Fiji, easily surpassing the previous record of 150 kilometres per hour mean wind set by Cyclone Nigel in 1985.

Damage was extensive, significantly affecting around 40 per cent of Fiji’s population. Homes were destroyed, trees and lampposts blown down and power cut to 80 per cent of the population. Forty-four lives were lost—some people killed by collapsing houses, others killed by flying debris.

Thousands of people sought refuge in official shelters before the storm struck, but even some of these were not spared. When the roof blew off one school, people tore up the floorboards so the 40 women and children inside could shelter underneath.

Before the winds peaked, some people chanced trips back to their homes to retrieve supplies. One mother of nine went to collect clothes for her children but was struck by a flying roof and killed, just metres from shelter, on her return trip.

The combination of low atmospheric pressure with hurricane-force winds drove the sea up onto the land, obliterating coastal villages. Some people were drowned, while others managed to swim to safety.

Bridges were washed away, roads damaged and communications cut. Crops were destroyed and food that had been stockpiled before the storm was spoiled when homes were wrecked.

Weeks later, a tropical low moved slowly past the islands and the damaged houses provided little shelter as heavy rain and flooding returned.

Damage was estimated at US$250 million, making this one of the costliest South Pacific storms on record. Given the size of Fiji’s economy compared to that of the United States, one commentator likened the cost to the equivalent of 15 Hurricane Katrinas hitting America simultaneously.

Partly because weather warnings persuaded people to move to shelters in time, the death toll was not as high as for Cyclone Meli, which took 53 lives in 1979, although its winds were much lighter.

As Winston left Fiji, it moved westward, then turned to the south, heading towards New Zealand. Some of the computer predictions had it eventually reaching New Zealand, but it came only about a third of the way before turning westwards again and slowly heading towards Australia. All the while it was weakening as it travelled over ocean that was too cold to sustain the cyclone’s tropical structure.

By the time it reached Queensland, Winston was a shallow low but still brought heavy rain, with more than 100 millimetres recorded in several places. It was preceded by six-metre swells along the coast of South Queensland, resulting in one death and more than a dozen injuries to surfers.

The track Winston took was remarkable, given that the Pacific was experiencing one of the strongest El Niño events on record. In previous strong El Niños, such as in 1982–83, tropical cyclones moved southeastwards away from the tropics well to the east of New Zealand. But this year, a large anticyclone to the east of New Zealand blocked Winston’s route out of the tropics and steered it westwards instead.

Unusually for an El Niño year, the anticyclone was present for much of January and February. Several times, the northerly flow on its western flank contributed to the arrival of tropical air masses and rain over New Zealand to places that had been expected to stay mostly dry.

The persistence of this anticyclone seems to have been linked to the temperature of the sea surface in the tropics. Waters to the north of the anticyclone were 3ºC warmer than average. The warm ocean favoured the development of frequent thunderstorms, which transport large volumes of air from near the surface to high altitudes. The air then flows away from the tropics, cools and sinks back towards the surface, creating a strong anticyclone. Such anticyclones dominate subtropical latitudes, which is the reason that many of the world’s arid regions, such as the Saharan and Australian deserts, are where they are.

Rising temperatures in the tropics associated with global warming have caused more intense thunderstorms, which in turn have caused the anticylones in the subtropics to become larger and stronger. This has intensified drought in some regions, such as the Eastern Mediterranean and Syria. A recent study of tree-rings in the region shows that the drought in Syria that forced more than a million refugees off farms and precipitated the civil war was almost certainly the most intense in the past 900 years.

Last year was the warmest on record, the result of El Niño and global warming. The global average temperature was 0.9ºC above the average for the 20th century and 0.16ºC above the previous hottest year, which was 2014.

What will tropical cyclones look like in a warmer world? Although it is not clear if the total number of cyclones will increase, there is good evidence that the cyclones are going to become more intense. Also, over the past couple of decades, the latitude at which tropical cyclones reach their maximum intensity has migrated further away from the equator into the subtropics.

In March last year, New Zealand had a close encounter with the remains of Cyclone Pam, which brought rain and gales to Gisborne. As it shot past, a couple of hundred kilometres out to sea from East Cape, the central pressure of Pam was 960hPa, almost 10hPa lower than either the Wahine storm of 1968 or the cyclone of 1936—the worst storm to hit New Zealand in the past 100 years.

Had Pam crossed over the North Island, it would probably have been our worst storm on record. We dodged a bullet that time, but in a warmer world we’re unlikely to be so fortunate. Whether the blocking high east of New Zealand was special to this year’s El Niño or will become a frequent visitor remains to be seen.