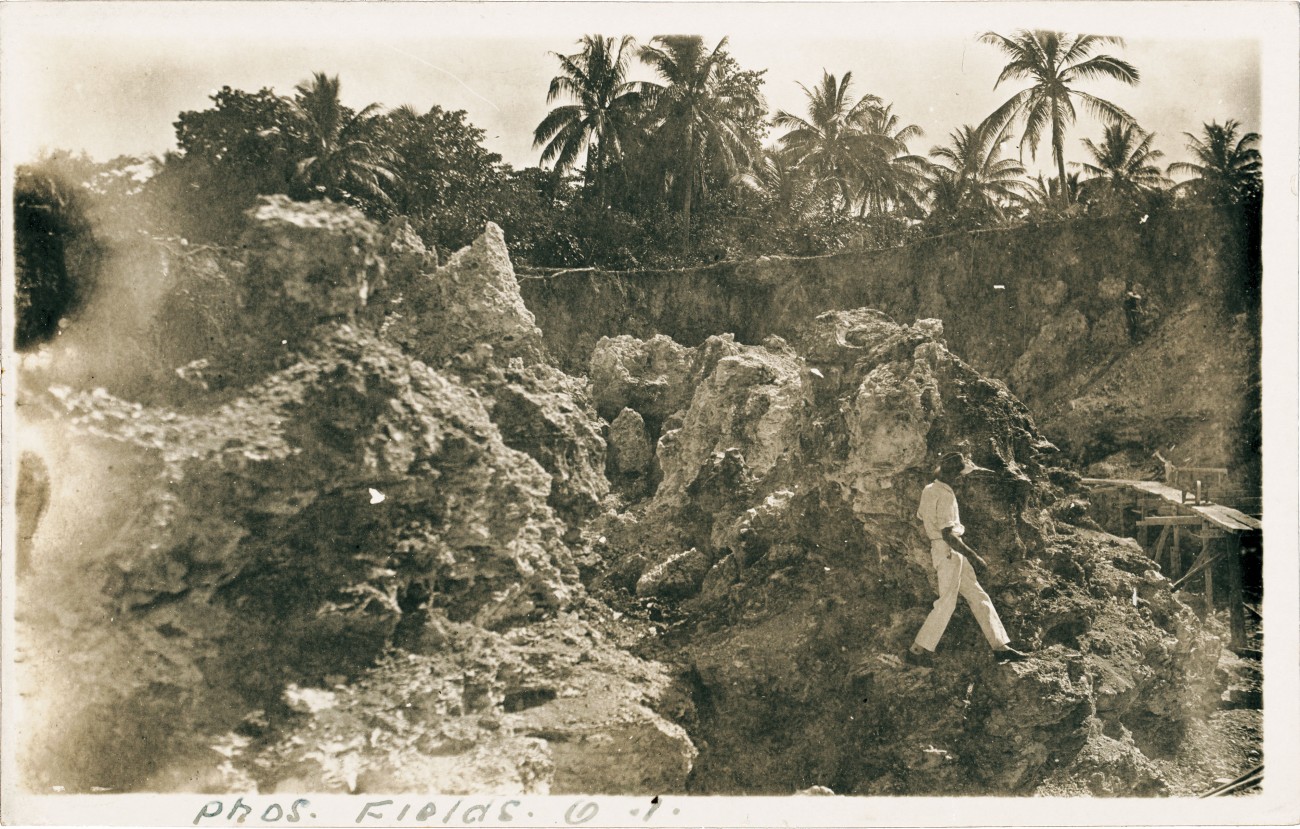 It was a singular chain of events that brought New Zealander Albert Ellis to anchor off equatorial Ocean Island (now Banaba), an arid lump of rock barely five kilometres long, aboard the steamer Archer on May 3, 1900.

Three months earlier, Ellis, an analyst and prospector with the Pacific Islands Company, had taken an interest in a rough, putty-coloured stone that was used to prop open the laboratory door in his Sydney office. Company founder John Arundel had picked up the curio—thought to be fossilised wood—on Nauru Island years earlier. Ellis had seen something similar on a guano-rich atoll, and on a hunch had it tested. The assay showed it to contain large amounts of pure phosphate.

Nauru was at the time a German protectorate, but Ellis recalled being told by a sea captain that Ocean Island, 300 kilometres to the east, was geologically similar. No one had been sufficiently interested in the remote, infertile island to lay claim to it, so the ambitious Ellis was sent to prospect there and on Nauru.

“The prospecting trip which followed was prob­ably a record one for shortness and decisiveness,” he later wrote. “We passed through the native village and a hole was sunk in the rising ground just beyond. The result was a gratifying surprise. For not only was rock phosphate thrown up but all the fine alluvial mixed with it appeared to be phosphate also.”

The island consisted almost entirely of high-grade phosphate—even the vegetation grew directly out of it. Ellis calculated that Ocean Island contained at least ten million tonnes of phosphate. He had struck ‘gold’.

But the likeable, church-going Ellis was first and foremost a company man. He drew up an outra­geous contract with the trusting Banabans that gave the company exclusive rights to mine the phosphate deposits for 999 years in return for a £50 yearly payment to the islanders. The document provoked such outrage when it was made public that Ellis relented and also agreed to modest royal­ties and compensation for mining damage.

Weeks later, in Nauru’s hilly interior, he discov­ered the largest deposit of high-grade phosphate yet found. After persuading the British govern­ment to annex Ocean Island, so that the firm could mine undisturbed, the renamed Pacific Phosphate Company entered a partnership with Germany to mine Nauru.

“Here was material for scores of millions of tons which would ‘make the desert bloom like a rose’ and would enable innumerable hardworking farmers to make a living and would facilitate the production of wheat, butter and meat for hungry millions for the next hundred years to come,” wrote Ellis.

He was right. Phosphate from Banaba and Nauru soon came to underpin the New Zealand economy. But the cost to the Banabans—resettled in Fiji after World War II—was high. By 1979, 90 per cent of the surface of their island had been stripped away, leaving little but pinnacles of coral. In 1975, they embarked on the longest court case in British history (106 days) when they took their griev­ances to the High Court. They achieved only partial success, and Banaba, scarred forever by the mining, is now part of the island nation of Kiribati.